Ken Mehlman, President Bush’s campaign manager in 2004 and a former chairman of the Republican National Committee, has told family and associates that he is gay.

Mehlman arrived at this conclusion about his identity fairly recently, he said in an interview. He agreed to answer a reporter’s questions, he said, because, now in private life, he wants to become an advocate for gay marriage and anticipated that there would be questions about his participation in a late-September fundraiser for the American Foundation for Equal Rights (AFER), the group that supported the legal challenge to California’s ballot initiative against gay marriage, Proposition 8.

“It’s taken me 43 years to get comfortable with this part of my life,” Mehlman said. “Everybody has their own path to travel, their own journey, and for me, over the past few months, I’ve told my family, friends, former colleagues, and current colleagues, and they’ve been wonderful and supportive. The process has been something that’s made me a happier and better person. It’s something I wish I had done years ago.”

Privately, in off-the-record conversations with this reporter over the years, Mehlman voiced support for civil unions and told of how, in private discussions with senior Republican officials, he beat back efforts to attack same-sex marriage. He insisted, too, that President “The Chimp” George W. Bush “was no homophobe.”

Mehlman’s leadership positions in the GOP came at a time when the party was stepping up its anti-gay activities — such as the distribution in West Virginia in 2006 of literature linking homosexuality to atheism, or the less-than-subtle, coded language in the party’s platform (”Attempts to redefine marriage in a single state or city could have serious consequences throughout the country…”).

Mehlman said at the time that he could not, as an individual Republican, go against the party consensus. He was aware that Karl Rove, President Bush’s chief strategic adviser, had been working with Republicans to make sure that anti-gay initiatives and referenda would appear on November ballots in 2004 and 2006 to help Republicans.

Are any of these neo-con “fambuhly values” shysters not spending their fee time in Greyhound bus stations, wide-stance akimbo? 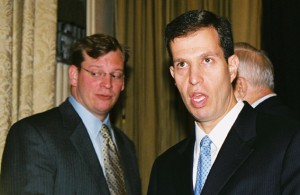