When I was a young editorial writer at The Washington Times back in the early 1990s, I had the good luck to work in the same office as Sam Francis. Sam had a talent for making devastating observations in pithy, everyman language that contrasted with the egghead-speak of so many faux intellectuals. One such was his term, “anarcho-tyranny.” Simply put, it means the growing tendency of the government to harshly treat ordinary (and typically non-violent) citizens over even the most minor infractions while at the same time treating violent predators – real criminals – with disinterest and often minimal punishment relative to their deeds.

The growing use of “shock therapy” – Tasers – on motorists who’ve committed minor traffic infractions such as failing to wear a seat belt or who grumble under their breath while being issued speeding tickets is Exhibit A.

Argue with a cop – indeed, do anything other than submit immediately to his any and every command – and you risk being shot through with 50,000 volts of “non-lethal” (but sometimes not) Attitude Adjuster. It’s happening all around the country, to people who likely never saw it coming or even conceived that such a thing could happen to them. People who work, pay taxes and never so much as pocketed a Hershey bar at the drugstore. Middle-aged hausfraus. Moms with their kids in the car. College kids. Retirees.

You and me, in other words.

There are two reasons for this.

First, the system and its laws are becoming more and more officious as well as omnipresent and increasingly hard to avoid. Books such as “Three Felonies A Day” (http://www.amazon.com/Three-Felonies…2862818&sr=8-1) detail the near-impossibility of not violating some state or federal law (inadvertently or not) just by dint of getting out of bed and going about your day. The country is so thick with Thou Shalt Nots – laws, rules and regulations – that there’s almost always a reason for some cop to pester you.

When you get indignant and object, it’s open season.

No reasonable person objects to honest self-defense – by a cop or otherwise.

Rather, the issue here is cops Tasing common citizens who’ve at most perhaps committed a “technical foul” such as speeding or failing to buckle-up for safety and who by no sane standard represent a physical threat to an armed (and usually male and usually young and strong) cop.

We’re talking about cops body-slamming people onto the ground and sometimes breaking their teeth off in the process – for things like talking back (or even just talking to themselves, as in the case of a 21 year old college kid who got The Treatment recently; see http://thenewspaper.com/rlc/docs/2010/us-taser.pdf). Or, check out this video:

The courts have affirmed most of this stuff, too. For the average citizen, there is almost no sphere of initiative (or safety from organized thuggery) left.

We must seek permission – and more importantly, we must obey.

Reason Two arises from the first: Bad laws attract bad men. What sort of human being – what sort of man – would Tase a middle-aged woman with her kids in the vehicle after pulling her over for a seatbelt violation? Or a college kid – neither one armed nor dangerous nor physically threatening the cop in any way? Answer: A thug. Someone who ought to be on the other side of the Thin Blue Line but clearly isn’t. Decent men and women just don’t do such things – because they aren’t thugs. But such people are less and less inclined to get into the law enforcement business because the law enforcement business is increasingly thuggish and the idea of such work repels them.

But ironically, as Sam would point out, the growing thuggishness of modern law enforcement doesn’t extend to real-deal criminals.

Have you ever watched any of those Live Cop TV shows? The boys in blue are often seen cajoling and even pleading politely with violent felons. “Please, Sir,” they say. And then courts hand down puff-piece sentences completely out of step with the nature of the offense. Less than five years for armed robbery – sticking a gun in someone’s face and threatening to kill them – is typical. To a career criminal – no job, no worries about his credit rating or his resume – five years in the clink (in practice, this will be less than two before early release) amounts to a free gym membership and three squares a day.

For the average Joe, on the other hand, being Tased, hog-tied and carted off to jail can be a life-altering experience. It may even be a life-ending experience (several people have died of heart failure after being hit with a Taser). And remember: All these people have done “wrong” is not show sufficient, immediate deference to some cop.

While we’re not quite yet at the Lavrenti Beria level of state-required slavish submission to authority – and state-sponsored sadism imposed on those who don’t immediately bow low – we’re not that far away from it, either.

Civil law enforcement is becoming militarized and this is no random development. Many cops are ex-military and have done tours in Iraq or in other provinces of The Empire. In these blighted places, they come to view anyone who isn’t wearing BDUs and buzz cuts as The Enemy. Or at least, some lesser form of life. Certainly not humans of equal standing deserving of the same respect they’d give to, say, their neighbor next door. So when they come home and become cops, they may carry the same attitude back with them. Civilians are strange and suspicious creatures – and the cops treat them much the same as an occupying army treats the ordinary masses in foreign countries.

The cultural divide between cops and ordinary Americans – in particular, middle class Americans – is probably wider today than it has ever been.

And this divide is growing as more and more “for our own good” laws are passed that give our increasingly militarized and unsympathetic law enforcement authorities legal pretext to harass us – and worse.

It’s a good thing Sam’s not around to see what America is becoming. 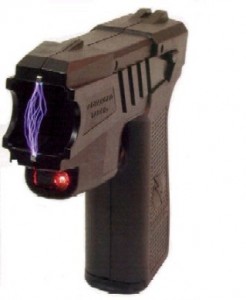 When Clovers Kill (Or Try To)