I trace the whole weird syndrome we live with today – of cops being ridiculously polite and solicitous toward violent thugs and real criminals while often acting brutally toward ordinary citizens who commit minor infractions such as “speeding” or “talking back” – to the 1991 Rodney King Incident.

King was a violent thug who not only led cops on an extended 100-plus mph chase through populated areas where some innocent bystander could easily have been killed; he lunged at the cops and fought like an enraged silverback gorilla on a PCP bender when finally cornered.

The cops were crucified for administering a roadside wood shampoo to King.

Had I done what King did, I would have expected a beating – and not complained if I got one.

But ever since the King Thing, cops have been forced by political correctness to bend over backwards to accommodate thugs like King. Which must be infuriating. And which may explain why they often end up taking out their understandable frustrations on the rest of us.

Pre-King (if you’re old enough to remember) a routine traffic stop was just that – routine. You could actually get out of your car, walk over to talk with the cop – and not put yourself at risk of being shot to death, or having a gun pointed at you. It was not necessary to “freeze” inside the car, with both hands on the wheel.

You could even argue with the cop – and not risk being immediately body slammed to the ground, Tasered and arrested for doing so.

I know it because I lived it. If you’re over 40, you remember this Old America, too.

Then the King Thing happened and everything changed. Cops became much more aggressive (toward us) and much less so toward the King types out there. Because they understand that to be anything other than obsequiously gracious toward some violent thug (most often a Treasured Minority) practically invites a lawsuit for discrimination and all the rest of it.

Meanwhile, the average white guy (or white woman, even if she’s a mom with kids) is now subject to the sort of treatment that King got – precisely because such people are not sainted members of a protected victim class and by nature don’t sue, sue, sue.

The writer Sam Francis called it “anarcho-tyranny” – and it is the best term I know to describe the upended society we live in. Juxtapose the rough treatment meted out to Ordinary Joes and Janes at “sobriety checkpoints, ” the TSA feel-ups when they’re trying to board an airplane and the depressing knowledge that their every e-mail and phone call is probably routinely monitored against the way rapists and murderers are politely addressed as “sir” by cops and judges and other agents of officialdom; the revolving-door sentences (if they’re sentenced at all) and the endless conveyor belt of rights and privileges and entitlements theyreceive.

Because anything less would be discrimination n’ sheet. 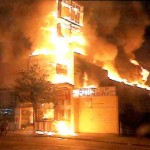