Kia did really well with its Sedona minivan – which was more affordable than many and better-built than most. But the traditional minivan is on the endangered species list; GM and Ford don’t sell them anymore and many other automakers (Kia included) are retiring them from their lineups.

“Crossover SUVs” are the new in-thing in a familymobile.

That’s why Kia is killing off the Sedona after the 2010 model year. Its replacement – the 2011 Sorento – is much more in keeping with the trend toward familymobiles that don’t make you want to drive over a cliff, a Pixar soundtrack accompanying your fall to the rocks below.

That it’s also almost two thousand bucks less (to start) than the outgoing (and soul-sucking) Sedona makes bidding adieu to the old bus even sweeter.

The Sorento is mid-sized, seven-passenger crossover SUV available with either front-wheel-drive or all-wheel-drive, four or six-cylinder engines and third row seating. It competes against models like the Toyota RAV4, Ford Escape, Chevy Equinox and its more uptown (and expensive) corporate cousin, the Hyundai Sante Fe.

The Sorento is completely redesigned for the 2011 model year.

With the V-6, the Sorento can get to 60 mph in just over 7 seconds; that performance make sit one of the quickest vehicles in its class.

The four-cylinder version takes about 8.2 seconds to get to 60 mph.

Either engine can be ordered with front-wheel-drive or all-wheel-drive. If you choose the latter you also get a driver-selectable locking center differential, which gives extra traction in snow and mud. This is a feature many AWD-equipped vehicles don’t offer at all.

All Sorentos come standard with Hill Start Assist and Hill Descent Control, too.

Surprisingly, gas mileage is about the same with either engine – about 19-20 MPGs city and 26-29 MPGs highway.

V-6 versions accelerate with almost muscle car authority, which isn’t surprising given the Sorento’s 276 hp V-6 is one of the strongest engines of its type in this segment (36 hp more than the Ford Escape’s 3.0 liter V-6 and on par with much more expensive, luxury-priced mid-sized crossovers like the Lexus RX). In fact, the only price-equivalent competitor that matches it is the Sorento’s corporate cousin, the Hyundai Sante Fe – which uses the same 3.5 liter engine.

The four cylinder version’s chief virtue is that you get it with a manual transmission – which some people just like better than an automatic, no matter how perfectly it might shift. You won’t get significantly better gas mileage; but you can save a few thousand dollars up front (four-cylinder/manual LX versions are much less expensive than V-6 EX versions).

The downside is there’s not much in the way of reserve pull on tap when the Sorento is loaded with people, or when you’re trying to pass a dawdler. The curb weight – empty – is about 3,800 lbs. With two people on board, you’re well over 4,000 lbs. and the four’s 175 hp often isn’t quite enough to give you a comfortable margin. It’s probably fine for chugging along in suburban traffic, though.

Poor weather-wise, I have nothing but praise for the Sorento.

I test-drove an early 2011 model (pre-production) during one of the worst winters SW Virginia has experienced in 20-plus years and was grateful to have a vehicle with some ground clearance and AWD. (The previous week I had a rear-drive Jaguar that sat maybe three inches off the ground).

I didn’t need to use the locking differential, but was glad to have that, too.

Many people believe they must have a truck-based SUV and heavy-duty 4WD (with 4WD Low gearing) to deal with rough weather, especially heavy snow. That’s an urban legend.

The truth is that truck-based 4WD with Low-range gearing is mainly designed to tackle off-road conditions – not poor conditions on-road.

If you don’t go off-road often and just need a vehicle that can deal with unplowed snow on paved roads, AWD will almost always do the trick and save you some money both up front (AWD is usually less expensive than 4WD) as well as down the road (AWD vehicles usually get better gas mileage than heavier 4WD vehicles). They (AWD vehicles) also give you better driving feel/handling when it’s dry and nice out – because car-based AWD systems are designed to improve dry-road handling and grip, too.

Truck-based 4WD systems are not.

In my opinion, the Sorento’s one of the best-looking vehicles in this segment. More sportwagon-like than boxy SUV-like. Large driving lights on either side of the lower front valance panel give it a sporty but not farcically macho face.

Equipment-wise, the Sorento can be fitted out with most of the stuff you’d find in an entry luxury-branded vehicle, including heated seats, Bluetooth wireless, keyeless pushbutton ignition, voice-activated navigation, premium 12 speaker Infinity audio with satellite radio, a Panorama sunroof that runs almost the entire length of the roof, rear-seat DVD entertainment with wireless headphones, mood lighting, etc. Versions equipped with leather seats get an attractive two-tone look.

Like other crossovers, you sit higher up and have a better view all around in the Sorento than you do in a standard car. This is a big part of the appeal. A back-up camera (bundled with GPS) is available to improve the one sightline that’s not-so-good with any SUV or crossover – the view behind you.

The standard third row seats offer more theoretical passenger-carrying ability than models without them (like the Equinox and Honda CR-V) but they suffer from the same problem that besets pretty much all third-row seating in everything except full-size SUVs: There is no footwell, so you have to sit with your legs bunched up toward your gut – if you’re an adult.

Headroom is ok, though – and the seats are perfectly usable for agile teens and younger kids.

The Hyundai Sante Fe tops them all with 78 cubic feet of cargo capacity.

Some buyers may be leery of Kia based on Kia’s first few years in the US market, when its models (like parent company Hyundai’s first models) lived up to their low prices with low quality – and often, lots of problems, too. But the Hyundai-Kia conglomerate now builds cars that are as good – and maybe better than – mainline Japanese stuff. Just ask a Toyota owner.

And the warranty is the best there is literally twice the coverage you get with a Toyota or Honda.

I also like to take into account price differentials. If a given model costs $1,200-$2,000 less than an otherwise similar competitor (as is the case with the Sorento vs. the Escape, the RAV4 and Equinox, etc.) it’s almost like being given a free additional extended warranty in the sense that if something major does go wrong years from now – such as a transmission failure – in effect it’s already paid for relative to the situation you’d be in had you bought the more costly competitor and the transmission or something like that croaked on you.

Don’t forget, in addition, that the Sorento comes standard with Hill Start Assist (keeps you from rolling backward) and Hill Descent Control (keeps you from building up excessive speed when negotiating a steep decline) in addition to all the “usual stuff” such as ABS, traction and stability control, front seat side-impact air bags and full-row curtain air bags – for under $20k to start.

No one’s going to miss the Sedona. And my guess is a lot of people are going to like it replacement. 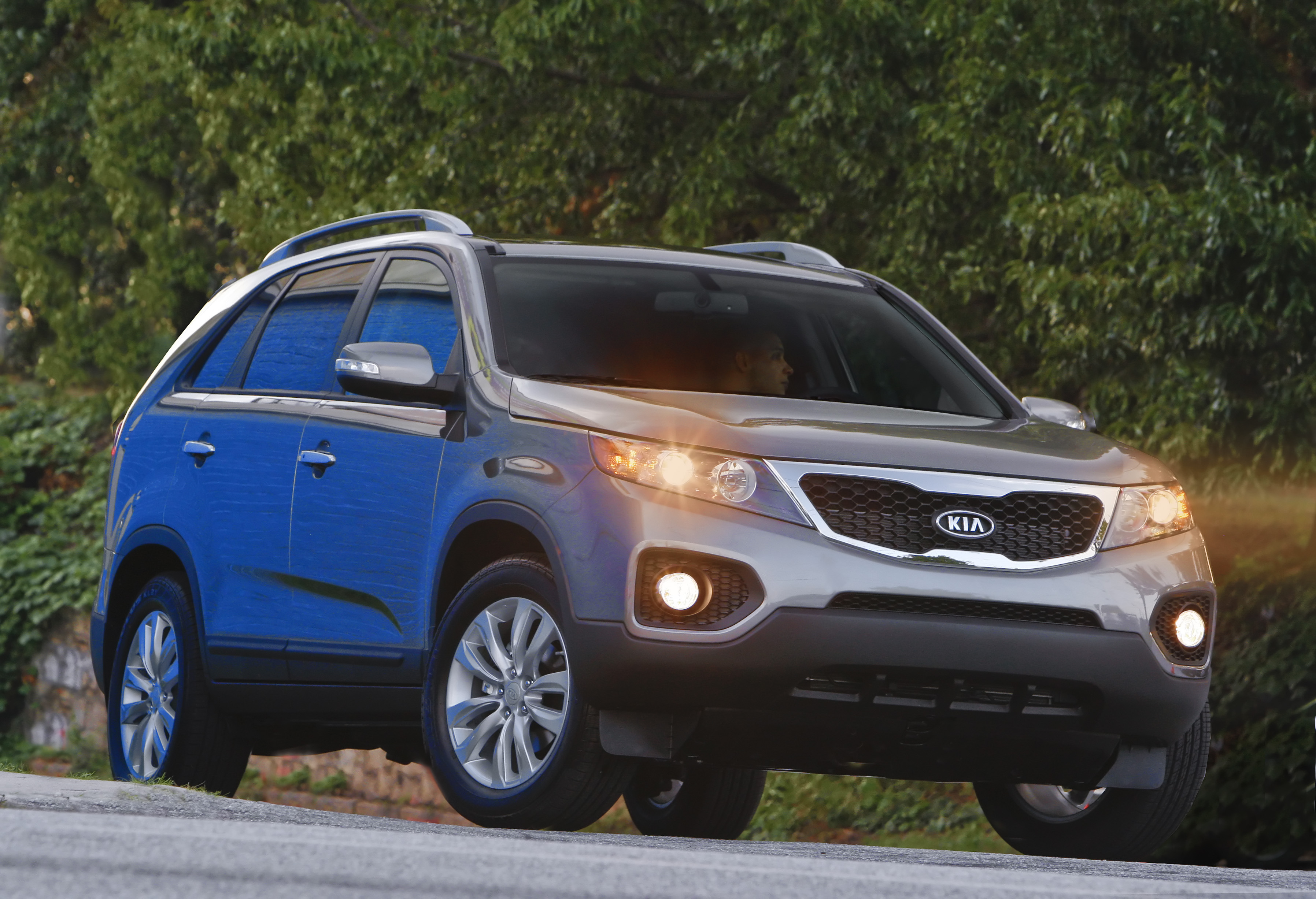