I think the Flouride in the water is doing its thing…

Almost every time I go out, I come up on a car – or an SmooVee – that’s doing either just barely the limit and often several MPH below it. The typical offender also likes to slow down and speed up for no apparent reason; the concept of maintaining a flow is beyond them. They’ll wander across the double yellow – and not just in the curves. Then jerk the wheel to recover their lane.

And of course the limit itself is already ridiculous. On most roads, it is well below what a competent, alert driver can safely handle. So these slo’ mo’s doing 3-5 mph below what’s posted are actually running (if that’s the right word) 10-20 mph below a reasonable cruising along speed.

The main road through my county in rural Virginia is US 221. This is a broad, two-lane secondary highway with gentle curves and many long, straight sections that sometimes run for as much as a mile or more. It is posted 55 mph. Most of the traffic is doing 60-something. Which feels like you’re standing still. Cruising at 70 or so (assuming no cops) is about the same as doing the same speed on an Interstate. It’s a non-event; you’re just making decent time.

Then you come up on some cowhead in an SmooVee (as often as not, some chrome-covered gigantosaurus with a 300-400 hp V-8) gimping along at 50-54 mph – slowing for the curves.

I wouldn’t mind these people so much if they’d just pull off and let the faster-moving traffic get by. But using the rearview mirror (and exercising common courtesy) are two things unknown to the pilots of SmooVees and Breedermobile minivans and high-powered luxury cars apparently bought solely for the status, because they never experience the north side of half throttle.

They just keep on going (slowly), indifferent to the line of cars stacking up behind them.

I sometimes have to execute several across-the-double-yellow passes every day. It’s either that or let an SmooVee under the sway of some Flouride-addled cowhead determine my pace.

And that isn’t in my operations manual.

Anyway, it seems to me the problem is getting worse. Maybe it’s because there are more geezers on the road (America is graying; the proportion of oldsters is rapidly increasing). Or maybe it’s because the up and coming generations have been reared in an environment of subservience, if not outright worship of “the law.”

With my generation (Generation X) it was different. We grew up contemptuous of “the law” and did our best to circumvent it when it seemed stupid. The 55 mph limit, for example. That was my reality in high school and college. And it was so obviously idiotic (we could remember, as kids, when the limit was 70-75 mph) that not only did people in my g-g-g-generation ignore it whenever we could, it imparted a reflexive cynicism and suspicion of “the law” in general. From 55 to the Dope War and on and on.

So, we developed our own compasses. We evaluated a situation on its merits and decided accordingly. If it was legal (and so, presumably, safe) to drive 75 mph in 1970, surely it was still just as “safe” to drive the same speed on the same road – in a much more modern car – in 1980.

Sure, it was illegal. But who respects that? The whole thing was just as ridiculous as the manufactured hype about “Marihuana” and reefer madness. We laughed at that, too. In fact, we laughed at a lot of what was “the law” – because it issued forth from obvious hacks and ninnies such as Richard Nixon and Joan Claybrook and (as far as the Dope Wars went) crossdressing creeps like J. Edgar Hoover.

In contrast, today’s crowd was reared in an environment of less-than-individualism. They defer to authority and to one of its most effective modern entanglements: political correctness.

As far as traffic laws go, they have no memory of a time when highway limits were routinely 70-75 and so think it’s a Great Leap Forward to be able to go 65 today. Because they can’t remember the “Drive 55” era – and the era before it, when speeds were much higher and it worked just fine – they don’t see the absurdity of the situation today.

They are much less likely to know there’s a two-part question: Ok, it’s illegal. But does that mean it’s wrong?

Politically correct indoctrination from grade school onward has taught them that if authority says so, why, it must be so.

Plus, they grew up in a video game word, with cars that are deceptively easy to “drive.” Many have never experienced a car with drum brakes and no ABS. If you had 100 under-30s do a road test in a 1970 F-100 pick-up with a three-on-the-tree manual and no power steering (or brakes) probably 90 of them would be in the ditch, wheels-up, within five minutes.

But mainly, it’s the suffocating steam of “safety” – the endless background drone that says to ever drive even a single MPH faster than that number on that sign … Well, you might as well get an AK and go shoot up a kindergarten.

People have absorbed this. They live it. How else to explain the situation? Almost everyone is driving around in a car that is fully capable of safely (assuming a competent driver) running much, much faster than the speed limits typical on American roads. And not just running faster. They stop well, too. Most modern cars take half the distance to come to a complete stop relative to a car from the 1960s – when speed limits were higher than they are today, by the way.

And they have ABS and traction control and a whole array of technologies that keep them on the road even when the driver can’t. All for what, exactly? So the “driver” can plod along at speeds that would have seemed glacial back in 1966?

At least back in ’66, the bluehair (or whomever) up ahead would have pulled off onto the shoulder to let you by.

But today, the driver of that chromed-out SmooVee on its 18-inch ree’-uhms up ahead is oblivious to the traffic behind it. The conversation she’s having on her sail fawn is much more engaging than paying attention to the road – or the rearview mirror.

If I could turn back time…. 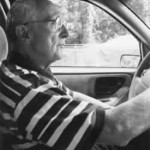