Modern cars have their (many) good point, but don’t you miss – just as an example – the different steering wheels cars used to have?

I don’t just mean model to model, either. I mean within one specific model of car. You used to be able to choose from among several different steering wheel designs, as a way to custom-tailor the car to your preferences.

The way it usually worked was the base trim came with a “basic” wheel and as you moved up the food chain to a higher-trim (or performance-themed) version, you either got or could add at extra cost a different steering wheel.

Typically there at least two and often as many as three different steering wheels from which one could choose.

For example, Pontiac once offered the Firebird with a standard, Custom Cushion or Formula steering wheel. Each conveyed a different impression and formed the visual centerpiece of the driver’s cockpit. Two otherwise same-year cars, identical in most major respects, were nonetheless quite different – to a great extent because of their individualized steering wheels.

You can thank air bags for taking all this away.

There isn’t a single new car that offers more than one take-it-or-leave steering wheel design. Sure, you can dress it up (or dress it down) with leather (or plastic), add a wood insert there, a piece of ornamentation there. But the basic shape is what it is. And what that is, is a blob in the center – to house the air bag – with a generic ring around it.

It’s just too expensive to rig up multiple different steering wheels for a single model of car – at least, if you’re going to put airbags into those steering wheels.

It’s the same tendency toward sameness you see reflected in the general shape of new cars. There’s only so much room for stylists to work with, given the constraints of federal bumper-impact standards and other safety requirements.

No more low-backed bench seats, either. Someone might get whiplash – and besides, there’s no place to mount the now-mandatory three-point safety belts every car has to have, per Uncle Sam.

People who’ve never driven a car built before the 1980s probably can’t even imagine just how open-feeling and unrestricted cars used to be. You could hang your left elbow on the top of the door (impossible today, because achieving high side-impact protection has raised the height of doors by several inches) or drape your right arm across the top of the passenger side seatback (which was lower than the height of your shoulders instead of higher, as today).

A-pillars (the upright piece of metal at each side of the windshield that tapered up to the roof) was generally much thinner, which may have meant less structural rigidity but also fewer blind spots. Ditto the B and C pillars – which in a current year can be thicker than Rosie O’Donnel’s thighs.

Yes, yes, the cars of the past were less safe – in a theoretical sense, anyhow. When people talk about this the assumption seems to be that everyone is going to crash, but of course most of us don’t. In which case, a Pinto is just as “safe” as a current Daimler Maybach with all the safety equipment imaginable.

Meanwhile, we’ve all lost something in a very certain, not-at-all-theoretical way – and that is the individuality once manifested even by mass-produced cars. Back in the days when Americans fell in love with their wheels because of their looks, or their fun-to-drive qualities; because of the freedom they represented.

Not because they were “safe.”

It wasn’t that earlier generations of Americans were reckless or stupid. They just thought there was more to life – and to driving – than sitting (all strapped in, of course) in a sterile, personality-free cocoon, “safe” though it may be.

But that was a different America, now long gone. 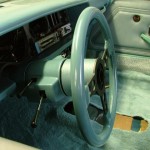 I’ll Never Own An Old Harley