Really quick – and really powerful – compact sedans and hatches are now being sold by several automakers. Some (like the new MazdaSpeed3) are pushing over 260 hp.

The downside is they’re also pushing $23k (or more).

So while Nissan’s 177-200 hp Sentra SE-R/SE-R SPEC V is no longer the King Ninja among sporty compacts it was as recently as two or three years ago, it’s still an appealing midway point between a schleprock econo-box with no guts or personality and a getting-pricey Speed3, Honda Civic Si or VW GTI.

The Sentra SE-R is a souped-up version of the Nissan Sentra compact economy sedan. It boasts a larger, more powerful 2.5 liter engine, more aggressive suspension tuning and interior/exterior upgrades over the regular Sentra.

SE-Rs get an upgraded (and larger) LCD display in the center stack for the audio/nav systems, with Real Time Traffic updating available. The headlights and tail-lights have also been changed slightly.

At its price point, the SE-R is still one of the hottest things going.

Roomier-than-most (in its class) interior.

SE-R not available with manual transmission; you have to buy the more expensive – and aggressive – SPEC-V to get one.

Not as sharp-handling as Speed3, GTI or Civic Si.

The SE-R comes standard with a 2.5 liter, 177 hp four-cylinder working through a Continuously Variable (CVT) automatic transmission. The more aggressive SE-R SPEC-V has a hotter, 200 hp version of the 2.5 liter engine and comes only with a six-speed manual transmission.

Both versions are front-wheel-drive.

This puts it about mid-pack; the 177 hp SE-R is quicker than the Lancer GTS and Forte – but not as fast as the GTI or Speed3 or Civic Si, all of which are in the under seven seconds bracket (or better).

The more powerful SER SPEC-V can reach 60 mph in about 6.7-6.8 seconds, which is right there with the GTI and Civic Si.

One benefit of the SE-R’s standard (and mandatory) CVT transmission is decent gas mileage. It rates 30 mpgs on the highway and 24 in city driving. That’s within a few clicks of what many current (and much less powerful) “economy” cars deliver. For example, Nissan’s own Versa econo-sedan – with a smaller, 1.8 liter engine making just 122 hp – rates 28 city and 26 in town.

On the other hand, the considerably more powerful MazdaSpeed3 pulls out a very impressive 33 mpg on the highway; the Kia Forte SX (about the same power output as the standard SE-R) hits 32 on the highway. The 177 hp SE-R does beat the Honda Civic Si’s 21 city, 29 highway, but you get more power (197 hp) in the Civic.

Still, that’s about dead even with the Si.

Nissan really likes CVTs. It was one of the first automakers to offer them – and it offers them in more models than most other automakers. The reason for this is probably the fuel-efficiency benefit of the CVT, which is capable of squeezing out slightly more miles-per-gallon than either a conventional automatic or a manual transmission. In a world where Uncle Sam is demanding that all new cars achieve a 35 mpgs by 2016, every little improvement counts.

CVTs improve gas mileage by keeping the engine in the ideal operating range (engine RPM) for maximum efficiency, whatever the road speed happens to be. Since there are no fixed gears (first, second, third, fourth, fifth, etc.) to shift through, the transmission is always in the “right” gear for the speed you’re driving. There’s also almost no “slippage” (power losses through the fluid coupling) as in a conventional automatic.

But CVTs are not the best in performance applications.

First, there’s some lag when you floor it from a stop because CVTs, unlike normal automatics, don’t have a torque converter (a device that multiplies engine torque at low engine speeds, to improve off-the-line acceleration).

Second, because of the way a CVT is designed to work, with its single forward speed, acceleration characteristics are very different than they would be in a car with either a conventional automatic or a manual transmission. Engine RPMs shoot right up to near redline and stay there as you accelerate. This keeps the engine in the sweet spot of its powerband, which is good for efficiency but it also makes a furious racket; the car feels like it’s really sweating. The experience is not pleasant.

In a regular family car or economy car, where steady cruising along and moderate acceleration are the normal everyday parameters, the CVT’s operating characteristics are more muted and the absence of coffee-spilling shift shock between gear changes (as with a regular automatic or manual) is nice.

But sport-minded cars tend to get hammered; it’s what they’re built for, after all. And for that kind of service, a CVT is not the best choice. Besides, what performance-minded driver wants an automatic – CVT or otherwise – anyhow?

Which is why it’s sucky that Nissan doesn’t offer anything except a CVT in the SE-R. Even the regular (non SE-R) Sentra is available with a manual transmission. But to get the clutch pedal in the SE-R (and the much-improved driving experience that comes with it) you’ve got to move up the scale to the SPEC-V. Given the small price uptick (about $660) and the fact that you also get an additional 23 hp (plus other upgrades) as part of the deal – it’s well worth doing.

The SPEC-V handles better, too – another plus.

Its suspension is noticeably firmer, with less body lean when you’re really going at it. Part of the reason for this is the more aggressive tire package that comes with the SPEC-V; there’s also additional body bracing to stiffen the chassis up.

And you get better brakes.

It won’t outrun a Speed3, but in the corners, a SPEC-V can hang with the GTI or Civic Si.

The Sentra’s a pretty big car for a compact. In fact, in several key areas, its dimensions (and interior space) are “almost Altima.” Its width, for example, is 70.5 inches – almost exactly the same beam as the Altima’s 70.7 inches. Both cars have exactly the same front seat headroom (40.6 inches) too – and the Sentra actually has more backseat headroom (37.3 inches vs. 36.8 for the Altima).

The Altima has about an inch or two more legroom in front and back, but otherwise, these two cars are very close in terms of their people-carrying capacity.

Compared with other cars in its segment like the Mazda3, the Sentra’s downright Large Marge in a number of key respects. Though the Mazda and the Nissan are roughly the same overall length (180.1 inches and 180.7 inches, respectively) the Mazda’s got about an inch and a half less front seat headroom, about an inch less hip room – and much smaller trunk (11.8 cubic feet vs. 13.1 for the Nissan).

The downside, of course, is that it feels bigger – and heavier – because it is bigger and heavier.

But the Sentra’s roomy, super-comfortable cabin makes up for a lot. The taller roofline is especially helpful if you’re over six-feet tall.

The SE-R doesn’t have a learning curve, either. You just get in and go. No over-the-top technology to drive you nuts. All the instruments and controls are immediately self-explanatory. The seats are long-drive comfortable, in addition to providing the firmness and support you want in a car like this.

The SE-R package itself is both performance-minded and luxury-oriented. In addition to the more powerful engine and suspension upgrades, you get most of the Sentra SL’s creature features, such as power windows, locks, intermittent wipers and the LCD audio system display. You can add keyless, push-button ignition, leather, seat heaters and a sunrooof.

An usual SE-R feature is the standard “G-meter” gauge. It sits in a twin pod on top of the center stack, next to an oil pressure gauge. It registers acceleration and deceleration forces, measured in “Gs.”

Aluminum-trimmed pedals and orange backlighting for the gauges (very 370Z-ish) are included.

One thing that may help sell you on a Sentra vs. some of its newer-to-market competitors is that it has an established rep for being a solid, reliable car. Its naturally aspirated engine is not overstressed or peaky; there’s no $3,000 turbo/intercooler to worry about down the line – after the warranty’s expired.

Of the others out there, probably the only one that’s known to be a 150,000 mile car (with decent treatment) is the Civic Si.

Nothing against the Speed3; I like it a lot. It is big fun. But 263 turbocharged hp flowing through the front wheels may not be the hot ticket five or six years down the road. I dig the GTI, too – but the fact is VW has had some issues with quality control. So has Mitsu.

Kia seems solid – but the Forte is an all-new model and who knows what the deal will be with it? We won’t have a clue until five or six years from now.

Nissan gives you a three-year/36,000 mile comprehensive warranty and five-year/60,000 mile coverage on the powertrain. This is par for the name brand Japanese stuff right now, although not as good as Kia (or Mitsubishi) provide.

Traction/stabilit control, high-capacity disc brakes with ABS, front seat side-impact and both-row curtain airbags are standard in both the SE-R and SE-R SPEC-V.

The SE-R’s a lot like an aging but still solid fighter. It may not have the strongest punch anymore, but it’s fully capable of going the distance. 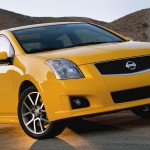