Why are car-based “crossover” wagons becoming so popular? That’s simple enough. They’re roomy like SUVs, usually look rugged like an SUV – and do about as well in the rain and snow as a truck-based SUV does – but without the truck-based SUV’s typically clunky ride and handling and typically obnoxious thirst for fuel.

Almost all of them have one big downside, however.

That downside – if you’re an enthusiast driver – is that nearly all current crossover wagons are based on front-wheel-drive layouts, usually with an all-wheel-drive system of some kind available optionally. If you want rear wheel drive (with a RWD-based AWD system) and the sports car handling/balance that comes with it, you’re pretty much out of luck.* *

The EX35 is a compact, 5-door hatchback sportwagon – aka, a “crossover” – that differs from most crossovers currently on the market in that it’s built around a rear-wheel-drive (instead of front-wheel-drive) passenger car drivetrain and chassis. As such, it offers performance/handling characteristics very much like a RWD sport sedan’s.

Main competition is the BMW X3 and the Mercedes-Benz GLK – both of which are also based on RWD layouts, but which lean more toward the SUV-like side of the aisle than the sport sedan side of the aisle.

The EX35 was introduced last year as an all-new model, so changes for 2010 are incremental. All trims now come standard with USB ports for the audio system and the optional GPS system has been updated with Real Time Traffic and Weather assistance.

Runs – and corners – like the G-series sport sedan it’s based on.

RWD versions can do burnouts; AWD versions won’t get stuck in the snow.

Ingot-like solidity outside; beautifully crafted on the inside.

What’s up with the mondo price increase?

Where’s the six-speed on the floor?

One of the EX’s standout features is its high-powered (and standard equipment) 3.5 liter V-6. It is the same basic engine as used in the G-series sport sedan, as well as the Nissan Maxima and Altima – and the 370Z. It’s just slightly smaller in displacement and tuned-down a tad to just under 300 hp.

Still, that’s power enough to launch the EX from zero to 60 mph in about 6.3-6.5 seconds seconds (RWD versions are quickest), which makes the EX one of the fastest things going in its segment.

However, you can get a manual transmission in the BMW (a feature not offered with the Infiniti). BMW also has an updated version of the X3 on deck for 2011 that will likely have more power, too.

Still, the EX is near the top of the pile as far as muscularity goes. Several FWD-based competitors like the Acura RDX and VW Tiguan don’t even offer V-6 engines and their fours max out around 240 hp – not even in the same ballpark as the EX35’s close-to-300-hp V-6.

A five-speed automatic is standard in the EX. It features “sport” programming that can be accessed by pushing a button on the console. This allows driver-control of up and down gear changes. There’s also a “Snow” mode that starts the transmission out in second gear (and reduces the aggressiveness of throttle tip-in) to improve grip on slick surfaces.

In front-wheel-drive-based systems, most of the engine’s output normally goes to the front wheels, until they begin to slip – at which point the system kicks back power to the rear wheels.

But there’s a price to be paid – at the pump – for all this high-performance goodness. The EX wants premium fuel only and it wants it often. EPA rates this hawg at an impressively gas-guzzly 17 MPGs in the city and 24 MPGs on the highway. AWD versions knock it down to a suck-a-licious 16 MPGs in city driving and 23 on the highway.

In the EX’s defense, the X3 and GLK are about as bad, fuel-efficiency-wise. And they’re not nearly as powerful – nor as fun to drive (see below).

Still, Exxon-Mobil will just love you if you buy this ride.

The EX may be the best handling vehicle of its type on the road.

RWD versions behave very much like a RWD sport sedan, which shouldn’t be surprising given the EX’s heritage. It is basically a wagonized version of Infiniti’s excellent G-series sport sedan – and rides and drives very much like it.

Most crossovers are either SUVs in drag – or wanna-be SUVs based on FWD passenger cars. This forces compromises in driving dynamics for the sake of off-road/poor weather bona fides. For example, the BMW X3 – which, being based on a rear-drive layout is closest to the EX in concept – is available only with full-time AWD and is set up to be more of a sporty all-weather SUV than an out and out sport wagon like the EX35.

The Benz GLK (based on the C-Class sport sedan) comes in both RWD and AWD versions, but the 30-something horsepower deficit gives the EX an obvious edge over the Benz sportwagon.

Further evidence of the EX’s tilt toward the sport side of the balance sheet is its standard/available wheel and tire packages, which include dry road-biased and very high-performance “W” (up to 168 mph) speed rated 18-inch performance tires.

Other factors that affect handling feel/cornering prowess are ride height and weight. The EX35 sits much lower to the pavement, with only 6.5 inches of clearance vs. the X3’s 8 inches (and nearly the same for the GLK, which has 7.9 inches of ground clearance).

That is a significant difference you really can feel in a high-speed turn.

If only Infiniti offered a manual transmission, this thing would really rock. Even so, the standard five-speed automatic gives the operator much more control over gear changes (when in Sport mode) than most other automatics – which frequently won’t let you move down a gear (or up) until the computer decides you’re at an acceptable road speed or RPM.

In the EX, you can drop down to (and hold) a lower gear sooner – and for longer – which almost makes up for the absence of a clutch.

The EX looks like what it is – a wagonized version of the G-series sedan. It’s much more restrained-looking than the wild-child FX (the EX’s big brother) which is even more wild-looking for 2010. The EX’s look is less dramatic, but it’s also less polarizing. You may not think the more conservatively styled EX is the most drop-dead gorgeous thing on four wheels, but it’s handsome and tasteful and even more important, neither will you (or others) point at it and say, “what the hell was that”? – as you might when an FX rolls by.

The interior layout of the EX is also similar to the way the G-series sedan’s laid out. It is much less SUV (or even crossover) like and more sport sedan-like, with a curving “double wave” dash that flows into the door panels and recessed LCD display for the GPS in the center stack. It is finished with black lacquer and aluminum trim plates or – optionally – wood veneer inserts.

One area where the EX is lacking relative to competitors like the BMW X3 and Benz GLK is cargo capacity. Behind the rear seats, there’s only about 19 cubic feet of space vs. the BMW’s 30 cubic feet and the Benz GLK’s 23.3 cubic feet.

Also, the back seat area is noticeably tighter, too. There’s just 28.5 inches of legroom for rear seat passengers vs. 35.8 in the X3 and 35.1 inches in the GLK.

Though several Infiniti models are either based on or share major components such as platforms and engines with less prestigious Nissan-branded models, Infiniti does a very effective job of putting distance between them – and not just price-wise.

The base EX, for example, comes with a high level of standard amenities, including automatic climate control, electric sunroof, premium stereo with factory satellite radio hook-up, 17 inch alloy wheels and Infiniti’s unique self-healing paint. The finish has high-elastic resins that let it expand to fill in small scratches without ever needing to visit a body shop – or get out the buffing compound.

With a starting price point of $33,800 the EX is also considerably less expensive than its most direct competitor, the BMW X3 ($38,850 to start), even factoring in the not-small uptick in MSRP for 2010.

Lots of safety equipment – both built-in crashworthiness and active accident-avoidance features – is a given on a vehicle such as the EX35. But in addition to the things you’d find in ay other similar in price vehicle, such as high-capacity disc brakes with ABS, side-impact and curtain air bags, traction and stability control, the EX35 goes up another notch with an available full perimeter Around View camera system that gives you a 360 degree bird’s eye look around the entire vehicle, as if you were floating 10 feet above it. It works when you’re moving forward as well as backing up, too – and makes it almost impossible to not notice something that you might otherwise bump into or drive over.

The EX also offers an optional Lane Departure Warning that beeps at you if you wander too near the double yellow line in the road. And this system does more than just beep at you, too. If the driver doesn’t make a steering correction to get the vehicle back on track, the system will do that for him – automatically.

The EX may look like a crossover SUV but it’s really a sportwagon, with more power than most – and better reflexes than any (in its price range, at least).

And that puts it in a class by itself. 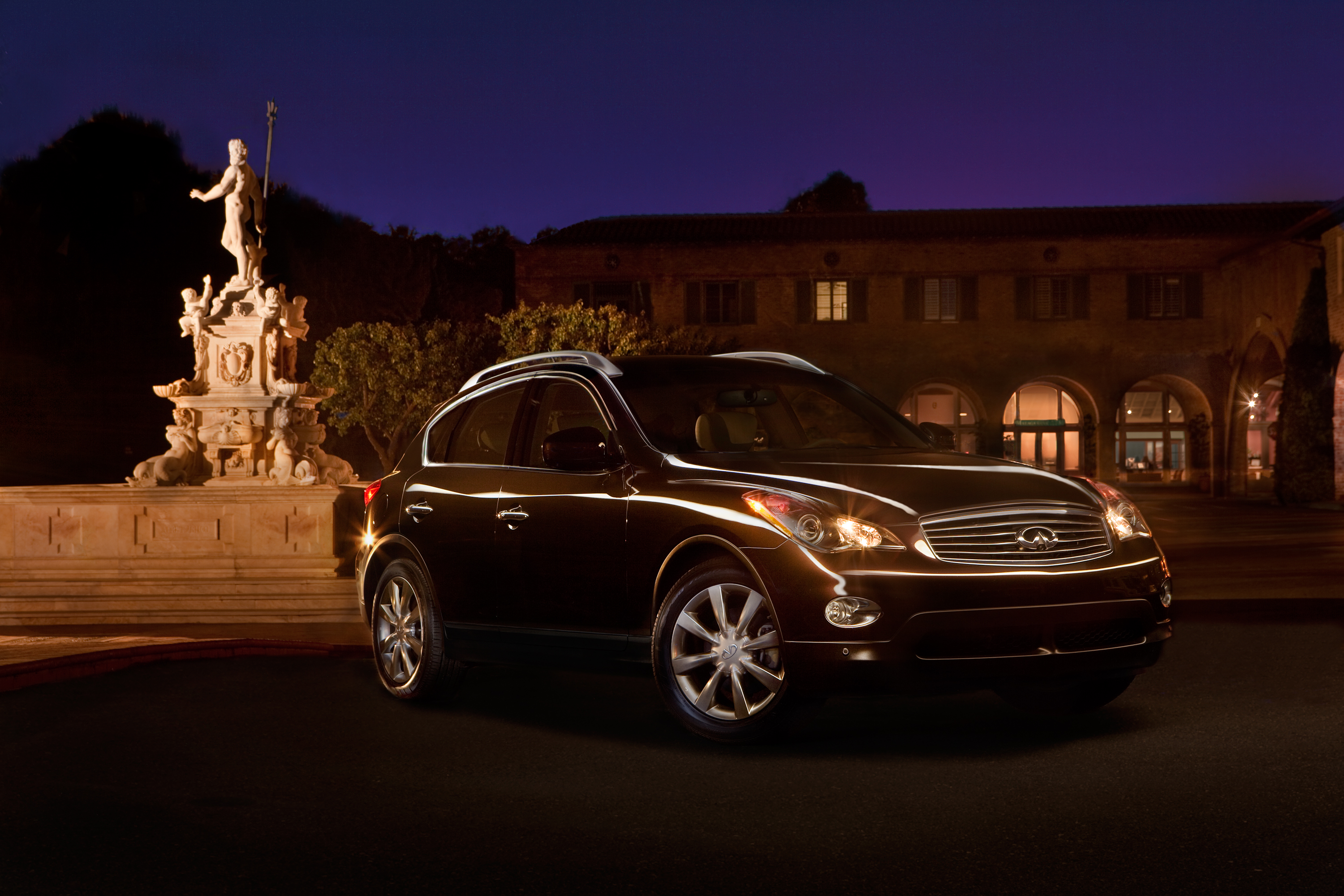