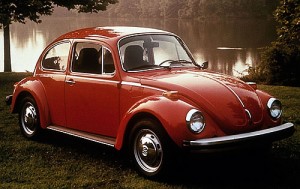 Turns out the second time’s not the charm.

Though it arguably can be credited with almost single-handedly launching what became the “retro” trend in new car design – spawning similarly historically-minded new/old cars like the Chrysler PT Cruiser, Chevy SSR, Mini Cooper and (most recently) the revived Camaro – it never got its hooks into the public psyche the way its predecessor, the original Beetle did.

There were several reasons for this.

First, despite the generally familiar shape, the New Beetle was functionally nothing like the old one. It was built around a front-engined/front-wheel-drive layout while the old Beetle was, of course, rear-engined and rear-wheel-drive. The latter arrangement gave the old Beetle much of its charm – as well as desirable attributes that included impressive tenacity in snow because the weight of the engine was right on top of the drive wheels, which aided traction.

The New Beetle’s engine was also water-cooled (like almost all modern engines) and like all modern engines, it was a highly complex piece of machinery beyond the skill set (and tool set) of the average Do-it-Yourselfer. This meant that when the car needed work, a trip to the dealer was all but inevitable.

With the old car – powered by a 1930s-era air-cooled “boxer” flat four with a single one-barrel carburetor, single fan belt, no radiator or water pump and a screen for an oil filter that you removed by turning out a single easy-to-reach bolt on the bottom of the engine case – virtually all normal maintenance could be done in the driveway by any reasonably handy person with a few basic, inexpensive hand tools. This kept ownership costs low, which was always a key reason why people loved the old car so much.

Sure, it was slow and it leaked carbon monoxide into the passenger compartment (and water, when it rained). It was rust-prone and it often needed a turn of the screwdriver here or a trip to the NAPA store there. But it almost never cost you real money and while little troubles did pop up, they could usually be fixed – by you – in the space of 10 or 15 minutes. This was empowering, even if it was a minor hassle at the time.

Few things are more defeating in this life than being stuck by the side of the road with a dead car and no clue what to do as you wait helplessly for someone who does.

A final problem for the New Beetle was that in a market that craves change, the car was very hard if not impossible to update without it becoming something else entirely. The old Beetle was more or less the same for decades and no one minded because in those days, people were content with a slower pace and satisfied with the familiar – and with what did the job well enough.

That won’t sell today. The life-cycle of a modern car is maybe four years before the market demands a major reworking, which amounts to a complete re-styling and re-engineering.

Not even Jaguars – formerly known for their ageless design that endured for decades, as in the case of the old XJ sedans – are safe from the march of time … and trendiness.

So when after three or four years on the market the New Beetle was still the same car it was at the beginning, people began to lose interest. After seven or eight years, it had become yesterday’s news, old hat – and no longer anything special or even especially interesting. And since it lacked the old car’s miserly virtues to sell it, sales began to collapse.

VW did make an attempt to inject some of the old car’s parsimony into the New by offering an advanced turbo-diesel engine. The problem was it cost a lot (close to $20k, new) which sort of defeated the whole purpose.

There was also a turbocharged sport version with a pop-out wing, just like a 911 Porsche. But that was a bad fit. A fast Beetle is a lot like a 4WD Corvette.

The New Beetle never quite found its niche, or developed one. It wasn’t inexpensive, or easier to own than any other modern FWD car. Often, it was harder – due to reliability and quality control problems.

Cuteness and retro styling only take you so far… .

Over the years, I’ve owned several of the original Beetles, including a ’73 Super Beetle. I never paid more than $1,500 for any of them and this was as recently as the early 1990s. They were ideal college cars/first-time-job cars – as old Beetles have always been, since before I was even born. The rugged little machine, conceived in the 1930s, survived the war, flowered along with Flower Power in the ’60s, grooved into the ’70s and even though the federal government legislated it out of existence (in the US, at least) after 1979 (due to emissions and safety regulations) it continued to be built right up to 2002 in Mexico – a production run that has never been equaled and probably never will be.

Only one car has sold more total units (the Toyota Corolla) and the comparison’s not really fair because the Corolla has had the benefit of an industrialized/westernized world market to play in while the VW had to slog through a cratered Germany/Western Europe after WWII and try to compete in a market (the US, 1950s and ’60s) that laughed at small cars with four-cylinder engines.

In comparison, the New Beetle’s record is pitiful. Twelve years. The Thousand Year Reich lasted about as long as that. It is a blip on the screen relative to the lifetime-long run (almost 70 years, from say 1936 through 2002) of the old car – which would probably still be in production today if the government would allow it. Buyer demand never slackened; it was just that the fragile (1,600 pound) shell could not comply with modern crash-test demands and the ancient air-cooled engine wouldn’t pass smog check.

Ultimately, what sealed the doom of the New Beetle was that it was fundamentally fraudulent, It may have looked like the old car, but in every key category that made the old model so appealing, the new car was anything but. It was in fact just another expensive, complex, can’t-work-on-it-yourself front-wheel-drive not-so-economical “economy” car draped in the sort-of sheetmetal of the real deal.

It won’t be missed much, I suspect.

But the old Beetle will never be forgotten.