Buick is now the best-selling American car… in China.

But in America, Buick is struggling to regain its footing. The traditional (read: older) Buick buyer can’t support the brand’s future. In a few years, most will be driving wheelchairs. And younger buyers haven’t been shopping Buicks in decades. Not since the ’80s, at least – when the division still made a few youthful cars at least, like the old rear-drive Regal Grand National. Buick needs to attract the under-50 crowd if it doesn’t want to end up like Pontiac.

Does the new-for-2011 Regal have the stuff necessary to make some headway?

The 2011 Regal is Buick’s entry-level sedan. It’s about the same size as a Toyota Camry or Honda Accord but (according to Buick) is aimed more at slightly smaller, more athletic near-luxury sedans like the Lexus IS250 and Acura TSX.

The ’11 Regal is a new model for Buick, though not for GM. The same basic car is sold in Europe under the Opel banner as the Insignia.

Though not a fire-breather like the ’80s-era Regal T-Types and Grand Nationals were, the latest Regal is a lot more alive-feeling  – and much more youthful looking –  than the AARP Staff Car Regals that immediately preceded it.

Excellent gas mileage (30-plus on the highway).

Comes with (or can be ordered with) up-to-date features and equipment such as hard-drive based navigation and music storage. You know, stuff that earlier Buicks were famous for not having.

Big (for the class) trunk.

Sportier than a Camry;  more stylish than an Accord – for about the same money.

Regal is a venerable Buick trademark going back several decades, but many current-day buyers who remember it probably associate it with wire-wheeled starter caskets that squat in the fast lane doing precisely 3 MPH below the posted speed limit – not exactly the image Buick is hoping to cultivate.

No manual transmission, either. (A six-speed manual will be available later on.)

Pricey – for what it is: $26k (to start) for a four-cylinder-only Buick may be a hard sell.

Rearward visibility is not the greatest.

The ’11 Regal’s standard powerplant is a 2.4 liter, 182 hp four with direct fuel injection. It drives the front wheels through a six-speed automatic.

For at least the first few months of production, this will be the only available powertrain.

As the model year rolls along, Buick will offer a 2.0 liter, turbocharged/direct injected four good for 220 hp – along with a six-speed manual transmission. Acceleration with this engine promises to be appropriate to the car (and class/price), in the mid-low seven second range – competitive with cars like the Lexus IS250/Acura TSX and as quick or quicker than a V-6 Camry or Honda Accord.

Gas mileage with the 2.0 engine ought to be about the same.

At this point, it does not appear likely Buick will offer an AWD set-up in the Regal.

Overall, this is (by far) the most engaging-to-drive Regal since the ’80s-era rear-wheel-drive muscle coupes that also bore the Regal name. It comes standard with 18 inch rims and performance tires, not 15s with whitewalls and knock-off plastic wheelcovers. The steering actually seems connected to the road – and the suspension will hold the line if you lean on it hard in a corner.

The only disappointment comes from under the hood. The base 2.4 liter engine doesn’t have the gumption to get close to 4,000 pounds (3,600 lbs. of car plus a driver and passenger) moving with suitable swiftness. A zero to 60 time in the mid eight second range isn’t terrible – it’s just not in the right ballpark for the competition Buick is scoping out. Both the IS250 and the Acura TSX have about 20 hp more (and in the case of the Lexus IS, two more cylinders), standard – with more on tap if you need it in the form of optional engines that get within spitting distance of 300 hp.

Granted, both the Lexus IS and the Acura TSX cost much, much more than the Buick (especially with their optional engines) so a direct comparison isn’t really fair. The problem, though, is that it’s not car reviewers who are making the comparison – it’s Buick that’s doing it. If the Regal’s target competition was, say, the four-cylinder version of the Toyota Camry (or the four-cylinder Accord), ok. The Regal looks pretty good, then. But if the stack-up is against cars like the IS250 and TSX, Buick should not have released the Regal before getting the eventually-will-get-here 2.0 liter, turbo engine and six-speed stick into the lineup.

Because with just the 2.4 liter engine, the Buick can’t hang.

Outside, the new Regal has a pretty generic modern shape – the basic “jellybean” distinguished as a Buick by the large, one-piece grille with vertical slats and triple shield Buick badge in the middle. There are some interesting detail touches, such as the reverse “L” dimple pressed into the doors that traces its line back to the rear fender arches – and a BMW-cum Acura-ish rear section with integrated spoiler lip. Though not a head-turner, the Regal is subtly handsome – and that’s in keeping with the division’s history as a brand that caters to people with money and taste, but who prefer to keep a lower profile.

Inside, the layout is Euro-modern (once again, credit the Opel background) with a blue-backlit primary gauge cluster (speedo and tach, temp and gas) and LCD driver info display nestled between them. There’s a little red blip that tracks with the speedometer needle as it moves; this is a classy touch that also improves the visibility of the gauge.

Nice seats that are a midway between aggressive sport buckets – and zero-support bench seats. There are thigh and shoulder bolsters, but they’re not hug-you-too-tight and it’s easy to slide in and out of the car. The touchscreen display for the nav/audio system is large and legible; the secondary buttons below it for other functions are simple to understand and generally easy to use.

The Regal offers almost as much back seat and trunk space as the Toyota Camry, too (38.3 inches, 15 cubic feet) and actually beats the Honda Accord (37.2 inches, 14 cubic feet) on those points.

This is a nicely put-together and solid-feeling car. The Regal’s 2.4 liter engine has been found reliable in other cars – and GM’s track record for durability and quality has been top notch for the past several years.

The only issue as I see it is that the market (the U.S. market, anyhow) doesn’t currently perceive Buick as the equivalent, status-wise, of Lexus or Acura. Buick, the division, dates from an era when there were no Japanese-brand luxury cars, period – and when Buick was a stepping stone on the road to a Cadillac within GM’s brand hierarchy. That is all in the past, though – and it’s an open question whether Buick (or, similarly, Ford’s Mercury division) can survive in a completely changed-over marketplace that just may not have room for what amounts to an almost-Lexus brand.

The underpowered base engine really hurts the car, too. Because $26k is a lot to ask for a four-cylinder car with a zero to 60 time in the mid 8 second range. This may hurt the car’s image, which will hurt sales – which will eventually hurt resale values.

It’s a very decent start – and a definite alternative to a stodgy appliance like a Camry (Japan’s version of yesterday’s Buick). But the Regal needs that 2.0 liter turbo engine – and a better 0-60 time – to go up against cars like the IS250 and TSX. 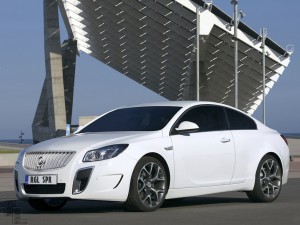