Classic-era muscle cars were known as much for their engines as their names. A big part of the attraction was popping the hood to reveal the rock star powerplant beneath – usually dressed up in chrome plated rocker covers, with a wild-looking dual snorkel or open element air cleaner and cool-looking metal foil stickers announcing its displacement or advertised horsepower.

Here are a few I remember from back in the day – and some of the things that made them special:

Twenty-somethings today have no idea that Buicks weren’t always starter caskets ambling along in the fast lane at 54 mph. Back in the late ’60s and early ’70s, Buick built some of the mightiest muscle motors – and quickest muscle cars, ever.

Perhaps the most legendary of these is the ’70 Stage 1 455, installed in the Regal GSX.

Don’t be misled by this engine’s seemingly mild 360 horsepower rating; be thrown back in your sport bucket by its locomotive-like 510 ft-lbs. of torque. This engine produced more torque than any other engine of the muscle car era – and it peaked at just 2,800 RPM.

In a big, heavy sled like the Regal GS this was just the ticket for brutal launches and sizzling quarter-mile timeslips. Stone stock, this street hero was capable of running the quarter in 13.8 seconds flat at more than 100 mph. Zero to 60 took 6.5 seconds – if you could hook it up.

Those numbers make the ’70 GS Stage 1 455 one of the quickest factory stock muscle cars ever built, period. And it delivered that performance with air conditioning and power windows, through an automatic transmission – and with civility few similarly high-powered muscle cars of the era could hope to match.

The Stage 1 engine featured a cold-air induction hood scoop that sealed up to a dual-snorkel air cleaner, high-flow 800 CFM Quadrajet four-barrel carb, large valve heads and a hotter camshaft, among other upgrades.

It represented the pinnacle of Buick performance. Its 0-60 and quarter-mile numbers would not be challenged until the mid-late ’80s and the introduction of the turbocharged Regal Grand National and GNX.

The interesting thing about the short-lived SD-455 is that it was Pontiac’s strongest street engine – and that it appeared after muscle cars had almost completely disappeared.

Even when it was a brand-new engine, it stood virtually alone. By 1973 Ford, Chrysler and the rest of GM’s divisions (including Chevrolet) had killed off most of their true performance engines – and even the cars that once housed them. But Pontiac – which arguably launched the muscle car era in 1964 with the launch of the first GTO – decided to close down the party by being the last one to sell a real-deal firebreather.

The 290-310 horsepower (net) SD-455 was installed in a small handful of Trans-Ams and Formula Firebirds – the Formula versions distinguished by the use of the Trans-Am’s shaker-style hoodscoop in place of the normal Formula’s twin-scooped hood.

Performance-wise, these cars were quicker (and faster) than earlier bruisers like the 1970 Ram Air III 400 equipped GTO and the even more radical (and rare) Ram Air IV 400-equipped ’70 Trans-Am.

A factory stock SD-455 was capable of low 13 second quarter-mile runs and top speeds approaching 140 mph – with a non-overdrive three-speed automatic transmission (or non-overdrive 4-speed manual) and 3.42 rear gears. Uncork the factory exhaust, shoe the thing with drag slicks and dial up the ignition timing a bit and SD-455 cars were reportedly high 12-second machines. That is quick by any standard – even today’s. (A new Corvette is only slightly quicker – and it is advertised as having more than 500 horsepower. It also has the benefit of a modern six-speed gearbox and massive tires to hook it all up.)

Even more remarkable, the SD-455 delivered this performance with low (8.2:1) compression and a mild hydraulic cam that worked well with an automatic transmission. Blocks and other internal components were SD-specific and the engine featured provisions for dry-sump oiling to help potential road racers. These engines also came with gorgeous cast-iron header-style exhaust manifolds and stickers on the driver’s side valve cover giving special maintenance instructions unique to the SD engine.

When the 350 small-block Chevy V-8 appeared (along with the also-new Camaro) for the 1967 model year, it was as a mid-performance engine – above the Camaro’s standard inline six, but several steps below the big-block 396 that was available in the Camaro SS. By ’69 (final year for the first-generation Camaro) it was still playing straight man to hot dogs like the Camaro Z28’s race-intended 302, which came with a Holley four-barrel carb – and which could be ordered with exotic equipment like a cross-ram four-barrel intake, with cowl induction, tube headers and chambered pipes in the trunk.

But as wild as it looked – and as great for high-RPM SCCA roadracing as the 290 horsepower 302 may have been – it sucked on the street. It wasn’t very driveable, didn’t work with an automatic transmission (none were offered on production cars) and wasn’t even especially quick, either. Stock ’67-69 Z28s were generally good for low-mid 15 second quarter mile times.

All this – and the so-so reputation of the 350 – would change in 1970, when the LT-1 appeared in the Corvette and as the new “second generation” Z28’s standard engine. Though it still offered high-performance special equipment like the previous year’s 302 – including an aggressive solid-lifter camshaft, high-compression pistons, four-bolt block and an aluminum high-rise intake with a Holley carb on top – the extra cubic inches gave it both superior horsepower (370, according to the press releases) and streetability.

It was also a better performer than the old 302 – capable of getting a ’70 Z-28 through the quarter in the 14s. Not only was the ’70 Z28 noticeably quicker than the ’69, it had much more part-throttle punch. Buyers also now had their choice of either a 4-speed manual or three-speed turbo-hydramatic, too. The engines came with a full dress-up kit that included chrome air cleaner and valve covers.

Unfortunately, the LT-1 had a brief life due to ever-increasing emissions regulations and was replaced just a few years after it was introduced by the much milder L-82, which lost the high-rise intake, Holley carb and aggressive camshaft. It was still a decent performer, but couldn’t match the untamed animality of the LT-1.

The 426 Street Hemi may be Mopar’s most famous, but like so many other extreme engines of the muscle car era that were basically race car engine “detuned” for the street – and put into production to legitimize their use in race cars – the Hemi was not at its best poking along in traffic. The truth is it wasn’t really happy outside of its native environment – the high banks of NASCAR super speedways like Daytona or ripping up the asphalt in quarter-mile bracket racing.

Hemi cars still get the big bucks today as collectibles, too. But back in the day, savvy street racers knew the virtues of the 440 – in either Magnum (Dodge) or Super Commando (Plymouth) forms.

Its rated peak horsepower – 375 at the peak of development – was not too far off the pace of the legendary Hemi’s 425 horse rating (though admittedly, the Hemi was probably under-rated). But “on-paper” numbers or no, the 440 delivered heroic performance in 4,000-lb sheetmetal dreadnoughts that had no business being fast.

The single four-barrel 440 was a tough customer, but for a few years, one could up the ante with a three two-barrel carb setup known as the Six Pack which pushed the rated output of the mighty engine to within striking distance of the vaunted Street Hemi. The three carb set-up got cancelled after ’71, however – and though the 440 block continued in production through the mid-late ’70s, it got crippled up after ’72 and continued to lose special parts (and performance) until the end, when it was just a big engine for big boats, all hollowed out and barely belching out 200 honest ponies.

Ford has built a number of standout V-8s over the years, including legends like the 427 and 428, the 390 and 351 Cleveland – and of course, the 429 Boss. But unlike virtually all the muscle engines of the ’60s, Ford’s sweet small block – the 289/302 – lasted as a production engine for decades after the original muscle car era ended. It was in fact still powering Mustang GTs as recently as the mid-1990s – and was only retired after Ford concluded it could no longer be tweaked to meet constantly tightening emissions and fuel efficiency requirements. Ford’s new 4.6 liter overhead cam V-8 took its place in the Mustang for the ’95 model year.

Like Chevy’s also-excellent small block V-8, the 289/302 was a very versatile little engine that could be built for economy and smoothness (in two-barrel form, with mild cam – just like Chevy’s 307, 305 and even a few 350s) or it could be set up as a full-tilt screamer with a 6,000 RPM-plus redline and more horsepower than it had cubic inches.

Early Mustangs with the K-code 289 “Hi-Po” (and its advertised 271 horsepower) are among the most desirable of ’60s-era muscle machines – capable of quarter mile times right there with the big block bruisers (14.68 seconds, according to one road test of the time). Ford’s small V-8 also held the line during the darkest days of the mid-1970s, keeping at least the idea of V-8 street performance alive (if not the actuality).

And when the second muscle car era flickered to life in the early 1980s, it was Ford’s Mustang GT – powered by a 5.0 liter “Boss” – that led the way. 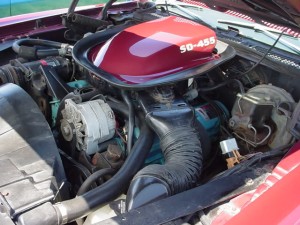