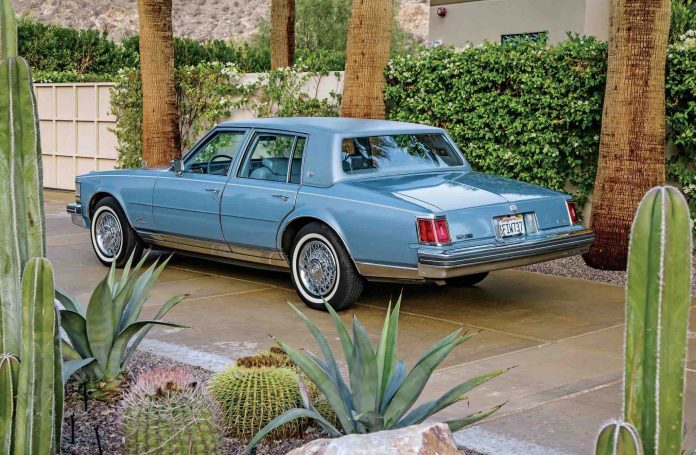 When did Cadillac start becoming BMW – or trying to?

This can be pinpointed with some precision. It was 1976, the year of the Seville. This was Cadillac’s first small car – for Cadillac. It was conceived as a Cadillac for people who were leaning toward the smaller luxury-sport sedans made – and being sold, successfully – by European brands, especially BMW but also Mercedes-Benz. These were carving slices of what had been Cadillac’s (and Lincoln’s) domination of the American luxury car market.

Part of this was changing demographics – and changing times. The people in the market for a new luxury car in the mid-‘70s were the people who had been in the market for sporty cars like the Mustang in the ‘60s. They were no longer the youth market but they weren’t old yet, either. And it was mostly older people who were buying up traditional Cadillacs. 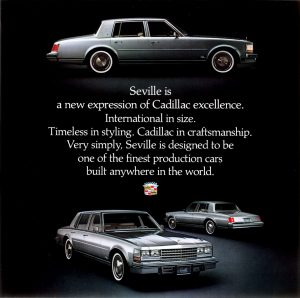 Don Draper was getting gray around the temples by the time Jimmy Carter became president.

Enter the Seville. In theory.

It was meant to appeal to the same youngish prospect who was old enough to be able to afford a new BMW or Benz but not old enough to be considering a move to Boca just yet. It was about the same size as a Chevy Nova – which made sense because it was built on the same underlying chassis, which featured a partial unibody with the engine and front suspension mounted to a bolt-on subframe.

At just 204 inches long overall, it could easily hide in the shadow cast by a Sedan DeVille, which spanned 230 inches, more than two feet longer. And almost a foot wider. A ’76 Sedan deVille was just shy of 80 inches side to side; the ’76 Seville just 71.8 inches.

Under the hood of the first Seville was the smallest V8 Cadillac made. And Cadillac didn’t even make it. The 5.7 liter V8 was made by Oldsmobile, which eventually got Cadillac into trouble with customers when word got out. Not that there was anything wrong, per se, with the Oldsmobile-sourced 350 cubic inch V8 that powered the first Seville. But it wasn’t a Cadillac V8 and people who paid Cadillac dollars weren’t happy when they found out that they’d bought an Oldsmobile V8.

The little V8 developed a respectable (for 1976) 180 horsepower and was fuel-injected, making the ’76 Seville the first mass-produced American car to come with it standard (EFI was offered as an option on a few earlier American specialty cars, such as the “fuelie” Chevy Bel Air of the mid-1950s, same-era Corvettes and a handful of others but it was always optional and these systems were also mechanical; the Seville’s system was a Bendix-Bosch-designed electronic injection system). 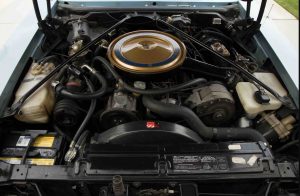 Still, it was quite a step down – in cubic inches and exclusivity – from the 7.7 liter and 8.2 liter Cadillac V8s that came in deVilles and Eldorados. These may have sucked oceans of gasoline but that was just the point. An economical Cadillac was kind of like a flat-chested Miss America.

Another step down was in the gravitas department.

A ’76 Sedan deVille had a curb weight just shy of 5,000 pounds – why is why it needed a minimum of 7.7 liters of V8 to move it in Cadillac style. But the Seville weighed about 800 pounds less (around 4,230 pounds) and so could get away with a Chevy-sized (and Olds-made) 5.7 liter V8, which delivered as much as 23 MPG on the highway – a shameful thing, almost, for a Cadillac. 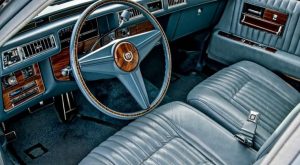 Cadillac moved 43,772 Sevilles off the showroom floor that inaugural (and Bicentennial) year. The first 2,000 of these were all Georgian Silver and carried the highest sticker price – $12,479 – of any Cadillac except the Series 75 Fleetwood limousine, despite being the smallest Cadillac on the showroom floor.

Unfortunately for Cadillac, the Seville’s primary appeal, as it turned out, was to older women – who were attracted to the car’s easier-to-manage dimensions. So an attempt was made to offer another attraction: 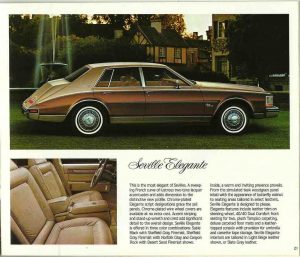 The ’77 Seville became the first Cadillac to come standard with four wheel disc brakes and the first American car – other than Corvette – to offer them at all. In ’78, a  digital instrument cluster – the Tripmaster – became available. It could estimate how long it would take to arrive at your programmed-in destination as well as miles-to-empty and miles-per-gallon.

Interestingly, another high-tech item, air bags – which had been offered as optional equipment in big Cadillacs as far back as ’74 – were not offered in the newest, smallest Cadillac.

Sales upticked slightly to a high (for the first-generation model) of 53,487 sold in 1979. However, this was still a drop in the bucket relative to sales of the big Cadillacs, which still accounted for the lion’s share (300,000-plus) of Cadillac’s total sales volume. 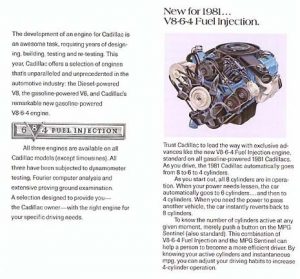 So another tack was tried – by changing the Seville’s looks and the way it drove. The look was as radical as the size of the ’76 Seville had been when it was introduced. A “bustleback” trunk that angled sharply downward defined the 1980 model. Like many of designer Bill Mitchell’s conceptions, you either liked it a lot or you didn’t like it – at all. However you liked it, there was no disputing the originality of the look as nothing else on the road looked like it – which was what Mitchell intended with his “statement” styling.

A less obvious but no less radical change was under the hood. Or rather, where the power flowed from what was under the hood. The brand-new second-generation 1980 Seville was a front-wheel-drive car now and would remain so for the rest of its production life. It was not the first front-drive Cadillac car, of course. The Eldorado was that – but the layout  served the same purpose, only more so – which was to increase the space inside this smaller Cadillac by getting rid of the drivetrain hump that would otherwise divide the floorpans down the middle. 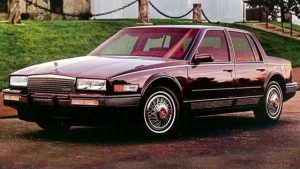 There was, however, a lot less under the hood. The carryover Olds-sourced 5.7 liter V8 was still around but the new standard engine was the catastrophic diesel V8, also sourced from Oldsmobile. It summoned 105 horsepower from the same 5.7 liters and delivered decidedly un-Cadillac acceleration and vibrations. A small Cadillac that sounded – and smoked – like a big rig resulted in sales falling to less than half what they were in ’76 by 1982, when just under 20,000 new Sevilles were purchased.

Cadillac made a bad situation much worse by adding cylinder deactivation technology – the infamous V8-6-4 system – to the gas engine. This not-ready-for-prime-time technology was discontinued after 1982 but created a tsunami of warranty claims and unhappy customers. The only way to avoid the partially running/misfiring V8 was to buy the new V6 – made by Buick, this time – as a “credit option.” 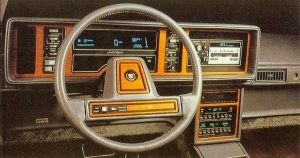 It was downhill from this point onward, for the Seville specifically and Cadillac generally.

In 1985, an all-new Seville made its debut. This car was even smaller – its length abbreviated by almost another foot – relative to the original ’76 Seville. It also came with a new “High Technology” (HT) aluminum-block (and iron head) V8, which was at least a Cadillac V8. But it was also a tiny V8, displacing just 4.1 liters at first. It was also a problem-prone V8, in part because of head gasket and intake manifold sealing problems.

On the upside, there was a new-design overdrive automatic and that plus even lower curb weight resulted in nearly 30 MPG on the highway. But that didn’t persuade nearly as many people as Cadillac had hoped. Especially given that the car’s price had increased by almost 20 percent over the previous – larger – Seville. The price increase wasn’t so much Cadillac’s fault as the Fed’s – inflation being rampant at this time. But it was no less harmful in its consequences for Cadillac. 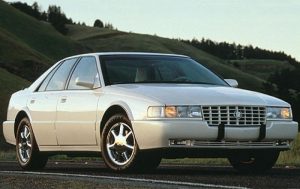 A final Hail Mary effort was made (in ’88) to take the old out of the car by re-marketing the Seville as the STS, the acronym standing for Seville Touring Sedan. It was meant in the same way that KFC is meant nowadays:

The 1992 STS was the most Un-Cadillac Cadillac yet. Not merely small, it was overtly sporty, with a 15.6:1 steering box, rear sway bar and aluminum wheels with Goodyear Eagle GT blackwall performance tires mounted. A new 4.9 liter Northstar DOHC V8 was under the hood and made almost 300 horsepower.

These cars were also fitted with anti-lock brakes and body-colored mirrors and dual exhaust (later models). They look good and they performed better than any previous Cadillac. It was by far the quickest Cadillac ever, capable of getting to 60 in about half the time it took a ’76 Seville to make the same run.

But they were no longer Cadillacs. 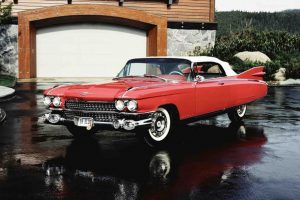 Despite being named Car of the Year by Motor Trend in ’92, sales of the final generation Seville (whoops, STS) never exceeded the numbers posted by the first Seville, peaking at 46,713 in 1996.

And none ever came close to the numbers posted by the great dreadnought Cadillacs the came before and which made Cadillac the standard of the world. Perhaps not in terms of quality but certainly in terms of impact.

The Seville never quite filled the bill. Perhaps because this Cadillac was trying to fit another standard; to be something else – and that rarely succeeds when someone else is already doing it – and did it first. The more Cadillac tried to be a kind of American-brand BMW, the less difference there was between a Cadillac and a BMW (and a Benz and and Audi) and so less reason to buy a Cadillac over those brands, which also did it better.