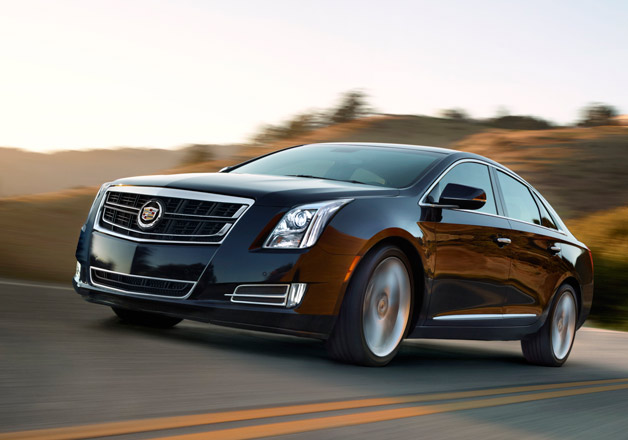 Remember when Cadillac’s thing was big  – and big-engined – land yachts? 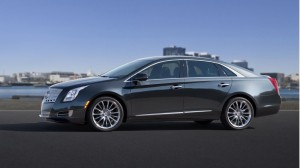 Here’s a measure of how much has changed since then:

Cadillac’s current “big car” – the XTS – is almost three feet shorter overall than a ’76 Fleetwood. And the Fleetwood wasn’t Cadillac’s biggest model back in ’76 (that would be the Fleetwood Seventy-Five, which was more than four feet longer than a new XTS).

Cadillac’s smallest car back in ’76 was the Seville – and it was two inches longer than the current XTS, the biggest 2014 model GM car you can buy. 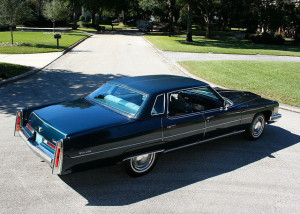 The new Chevy Impala is only about three-quarters of an inch shorter overall – and has the same wheelbase as the XTS. It’s also got a bigger trunk.

However, while the XTS may be modestly sized by historic Cadillac standards, it is still large relative to current standards, to other new cars in general. And it is several ticks larger than other manufacturer’s comparably priced luxury sedans – which are all mid-sized sedans, smaller overall and with far less room in the backseat. 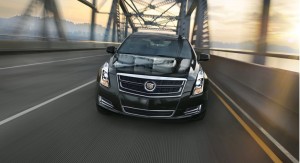 The XTS also hasn’t got a big V-8 under its hood, but its newly available twin turbo V-6 puts out Cadillac-appropriate oodles of torque: 369 ft.-lbs. That’s actually slightly more torque (by 6 ft.- lbs.) than a ’76 Sedan deVille’s 8.2 liter, 500 cubic-incher made. And the twin-turbo’d V-6 XTS makes it into the mid-20s on the highway – whereas it was hard to get an 8.2 liter ’76 deVille into the teens, period.

So, times have changed – but not necessarily for the worse.

The XTS is Cadillac’s top-of-the-line luxury sedan. It’s full-sized – but priced competitively with the mid-sized offerings of numerous lux-badge players such as BMW (5 Series) Audi (A6) and Mercedes-Benz (E Class).

The Caddy is also a kahuna compared with Lincoln’s largest – the Taurus-based (and mid-sized) 2014 MKZ.

Still a big-un, relative to the competition. 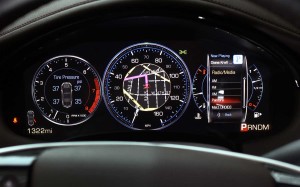 Emphasizes posh – and quiet – as a big Cadillac ought to.

Hasn’t got the Elvisian presence a top-of-the-line Cadillac ought to.

If you use it, turbo V-6 is only slightly less thirsty than a V-8.

“Haptic” finger-swipe controls are not always immediately responsive (or respond in ways you didn’t intend). 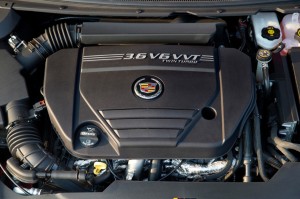 Something startling has happened – and no one seems to have noticed.

Cadillac no longer offers a standard V-8 in any of its passenger cars. The STS and DTS were the last – and they’re gone now. Been gone since 2011, in fact.

The only current Cadillac car that even offers a V-8 is the ultra-performance version of the CTS, the CTS-V.

That’s quite a change from the days when Cadillacs always came not just with V-8s but the biggest V-8s GM had in the inventory. That ’76 deVille mentioned up above? It had 8.2 liters of V-8 under its aircraft carrier flight deck of a hood. It made even a Corvette’s 454 seem kinda small. 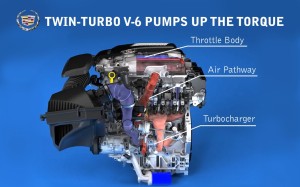 Cadillac – like its competitors – has been very discreetly moving toward ever-smaller engines, their output goosed on demand by turbos, in lieu of the always-thirsty V-8. The object being to maintain V-8 power/performance levels while being able to advertise better potential fuel efficiency. The former to keep customers happy – the latter, to keep the government off their backs. 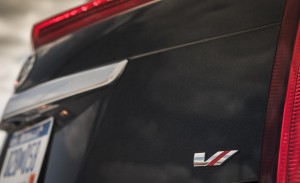 The first is adequate – the second transforms the car.

It’s not merely that the turbo Caddy is quick (0-60 in about 5 seconds flat vs. 7.4 for the non-turbo version) it’s also got that surge of seemingly bottomless hand-of-god thrust at part throttle that once upon a time defined a big-engined Cadillac. 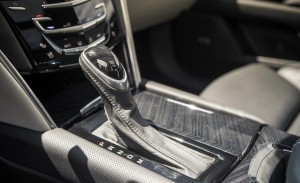 Both versions of the 3.6 V-6 are paired with a six-speed automatic, but the V-sport version with the turbo engine gets more aggressive shift tuning and steering wheel mounted paddle shifters – as well as standard all-wheel-drive and a sportier 3.16 final drive ratio to help the car launch harder.

The non-turbo engine can be ordered with – or without – AWD.

Gas mileage can range from decent – to deVille-esque – depending on your right foot.

On paper, the turbo V-6 is capable of 16 city, 24 highway. This is very close to what the base/non-turbo engine delivers (17 city, 26 highway with AWD) and theoretically much better than an old-school V-8 (like the ones that powered the recently retired DTS and STS) could deliver – at least, with the ignition key in the “run” position. 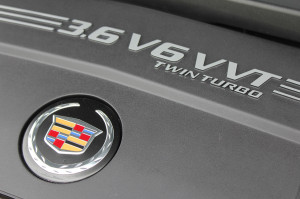 But like all turbo engines, if you make frequent use of the turbo – which effectively increases the engine’s ability to suck in air and fuel through the miracle of force feeding   – you will see a marked decrease in your real-world numbers. During a week-long test drive, I averaged high teens – virtually the same mileage delivered by the recently retired and larger/heavier DTS, whose 4.6 liter engine returned 15 city, 23 highway, according to the EPA – and usually averaged around 18 or 19 with me behind the wheel.

To be fair, the ’11 DTS’s 4.6 liter V-8 made nowhere near the power the ’14 XTS’s turbo V-6 produces. But the point is, there’s no such thing as a free lunch. A small displacement turbo engine can give pretty decent fuel economy – if you keep your foot out of it.

But if you put your foot in it, forget about it. 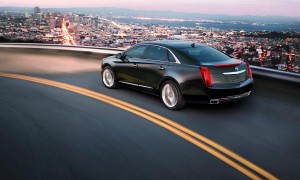 The good news is, we still have the option. And we have that option only because going with these potentially more economical turbo engines amounts to an end-run around Uncle. He sees six cylinders instead of eight – and 16 city/24 highway instead of 14 city/19 highway (the mileage of the 6.2 liter V-8 CTS-V).

I’ll drink to that – and so should you. 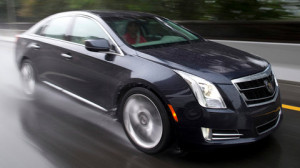 Maximum torque – all 369 ft.-lbs. – is available almost immediately, from 1,900 RPM up. This is what you want in a big – and heavy – car. No turbo lag, no need to mash the gas to get things going. It parts the waves effortlessly. Very deVille-like. But should you mash the gas, you’ll get a reaction that’s most un-deVille. Old school Caddy V-8s ran out of breath by 5,000 RPM. This turbo V-6 will snap to nearly 7,000 RPM on the adjustable redline LCD tachometer.

There’s no noticeable torque steer – the Haldex AWD system takes care of that – but the transmission probably ought to have eight gears instead of six (six being the de facto minimum expected of any 2014 model year car, let alone a top-of-the-line luxury car). And the shift timing/quality under full throttle could use some tweaking. I happened to have a new BMW 3 series GT the same week I had the XTS V-Sport. The BMW had an eight speed – and its WOT shifts were fast, furious – and perfectly timed – like Floyd Mayweather working some poor schmuck’s ribs. Snap – snap – snap! Right on the money, every time. The Caddy seemed a lot happier at half to three-quarters pedal, with the superabundance of torque compensating for the relative lack of gears to run through. 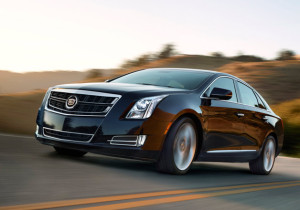 Ride and handling are likewise middling sporty – somewhere in between the old STS and the old man DTS. The power of the turbo V-6 is magnificent, though – and complemented by the sure-footedness of the standard Magnetic Ride Control system, which firms up the suspension as you drive in response to how you drive. And also the fairly aggressive 20-inch (40 series) Bridgestone Potenzas, which do an excellent job of providing high-speed lateral grip without a rough ride (or tire drone) on the highway. 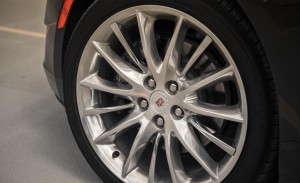 Sometimes, the middle is the right ground to hold.

Another area where the XTS splits the difference is size. It is a smaller car (by almost half a foot) than the recently retired DTS  – formerly Cadillac’s largest car – but almost half a foot longer than the also-recently-retired STS. 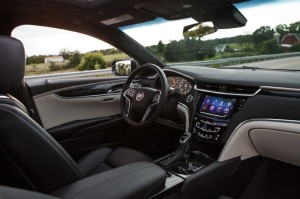 At 202 inches long overall (vs. 207.6 for the DTS and 196.7 for the STS) the full-sized XTS casts a longer shadow than than price-competitive mid-sized luxury cars like the BMW 5 (193.1 inches) and Benz E-Class (192.1 inches) and it’s about the same size overall as much more pricey full-size stuff like the Audi A8 (202.2 inches). If you want a noticeably larger car than the XTS. you’ll need to upgrade to something like a Benz S-Class (206.5 inches) and that will cost you nearly twice the base price of the Caddy. 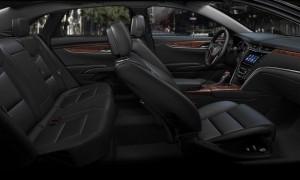 The XTS is also a roomier-than-most car – both relative to the price-equivalent competition and also relative to the price not-equivalent competition. The Caddy’s 42.1 inches of legroom up front beats the BMW 5 (40.5) and Benz E (41.3) and its second row legroom (40 inches) pummels them. The 5 Series has only 36.1 inches of second row legroom; the Benz E even less (35.8 inches).

Those figures are 4 inches less than the current Toyota Corolla’s, fyi.

To obtain spreading out room that’s comparable to the XTS, you’ll need to move up to the full-sized stuff like the A8 or a 7 Series BMW or LS Lexus – all of which cost orders of magnitude more and which in several cases are still less slightly spacious than the XTS. The A8, for instance, only has 41.3 inches of legroom up front – and 38.9 in the back. The full-sized Lexus LS has a roomy first row (43.7 inches) but a second row (35.8 inches) that’s even more cramped than most of the mid-sized stuff previously mentioned. 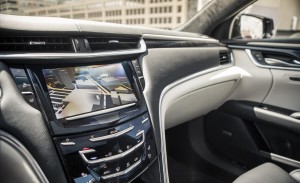 Caddy offers more than merely space, though (you can get that in a new Impala). As a top-of-the-line luxury car, the XTS is a rolling Taj Mahal defined not by what it has but what it hasn’t got – which is very little. “Base” models come with multi-zone climate control, 8-inch touchscreen, Bose stereo, leather/suede upholstery and wood trim, power tilt/telescoping steering wheel, Xenon HID headlights and power actuated everything. That’s expected. Unexpected stuff includes the way the LCD touchscreen senses your hand before your hand actually touches anything. The Star Trek: Next Generation finger-swipe controls (GM calls this “haptic”). The driver-configurable – and completely LCD – dash cluster. The available collision avoidance/rear cross trafffic system that vibrates your butt cheek – either the left or the right, depending on which direction the threat is coming from. 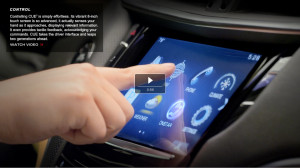 You can up the Buck Rogers quotient with an optional Heads Up Display for the driver and dual fold-out Blu-ray LCD monitors for the backseat passengers.

Rain sensing wipers, adaptive cruise control, a power rear sunshade, heated steering wheel – order pretty much everything (including the V-Sport package and 410 hp V-6) and you’ll be looking at just over $69k ($69,095 to be precise). My car had the cherry on top – White Diamond Tricoat white paint, a $995 option. Total tab: $70,090. 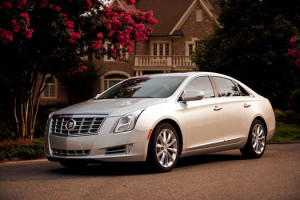 Cross shop the size (and features and performance) comparable competition.

It’s a similar story at the other stores.

The touch-sensitive “haptic” controls will definitely amaze your friends – but they may also flummox you. At least until you get used to swiping (and gently tapping) the touch-sensitive pads – rather than pushing old-timey buttons.

The three-stage heated (and cooled) seats merely warm and cool – but the heated steering wheel gets roasty toasty. You can feel the heat even through gloves – and on bare hands, it’s almost spa-like. 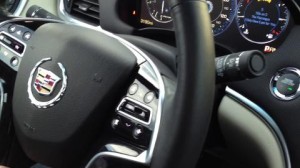 Backseat legroom is – as discussed – exceptional but headroom can be tight for taller drivers if the car is ordered with the optional sunroof.

Cadillac might want to look at – and may be looking into – a diesel or hybrid variant. BMW has just put a diesel engine option on the table for the ’14 5 Series that’s capable of almost 40 on the highway. And the new E-Class Benz comes standard with a 40 MPG-capable diesel and also offers a hybrid powertrain that can be driven up to about 22 MPH on the batteries. This lets Benz get away with selling a few 17 MPG V-8s (E550).

Cadillac could use something like that to take the edge of its fairly thirsty engine lineup. To keep Uncle distracted. 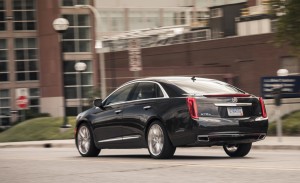 So we can still get 410 hp turbo Cadillacs.