The early Second Gen cars – 1970-73 especially – get most of the love from collectors; they are the high-dollar desirables you see on the pages of magazines and rolling across the auction floor at Barrett Jackson, commanding big bucks bids. And even people who aren’t into Pontiacs (or muscle cars) know the ’77-up models. They are synonymous with “Smokey & The Bandit” – and (unfortunately) disco.

But what about  mid-year Trans-Ams like my ’76? The models that bridge the gap between the factory high-powered (and largely, emissions-free) TAs of the early years and the smog-era Disco Machines of the latter ’70s?

These cars – especially the rarely mentioned (and relatively low production) ’75-’76 models – are an interesting middle-ground between all-out performance and the more luxury-oriented, not-as-brutal later cars.

They are also still affordable; you can find nearly perfect/restored examples for under $30k. Very nice drivers you can take to local shows – like mine – go for around $15-$20k.

So, what makes these middle-year TAs appealing – besides being affordable?

For openers, they ride and handle much better.

When Pontiac introduced the second Gen. TA in 1970, the engineers were still fleshing out the car’s cornering abilities. Those early TAs are fast, but they ride like trucks. It was during the mid-70s, as horsepower waned, that the engineers began to focus on the car’s handling dynamics. While the superb WS6 package would not appear until the 1977 model year, the ’75-76 TAs had been tweaked by Pontiac engineers to work with the then-new radial tires, which allowed for a softer ride without any loss of cornering prowess. Drive a ’70 TA and a ’75-’76 TA back to back and the differences are obvious. While the later cars may not have the all-out power, they are much more refined cars.

The Trans-Am’s RTS (Radial Tuned Suspension) system was one of the best-engineered suspension packages of the ’70s. It included large diameter front and rear anti-sway bars along with relatively soft springs to maintain the car’s attitude in a turn without the harshness that was typical of same-era performance cars, including the TA’s corporate cousin, the Chevy Camaro Z28. The package also included a special higher-effort steering box and braces to tighten up the physical connection between the front subframe (which was a traditional bolt-on frame that cradled the engine and front suspension) and the rest of the car from the cowl back (which was a unibody).

1975-76 was also a time for firsts (catalytic converters) and lasts (the big 455 V-8, the famous polycast Honeycomb wheels, round headlights).

After 1976, the biggest engine you could get in a Trans-Am was the 400. Not a bad engine by any means. But it was just a bored out Pontiac 326/350 and lacked the mountain motor status of the 7.4 liter 455, which represented an entirely different branch of the Pontiac engine’s family tree. The 455 descended from the 428/421 V-8s of the mid-late ’60s and featured an extremely long stroke – and torque output surpassed only by two other GM engines – Buick’s 455 and the Cadillac 500.

The last 455 was only sold with the 4-speed manual during its final two years of availablity and in very limited numbers. But its presence on the list of possibilities gives the ’75-’76 cars a gravitas the later cars lack. Sure, it wasn’t much in stock trim; just 200 hp. However, it was still a 455 and with a few hours of work, it could be roused to produce very respectable numbers – and performance. Just ditching the stock single exhaust and log manifolds for headers and duals was worth 20-30 hp. With a tuned/jetted carburetor and wicked-up ignition, the stock ’76 455 was capable of 250 hp – enough to get the car into the 14s in the quarter-mile. For 1976, that was big speed.

1976 was also the final year for the unique Pontiac Honeycomb rim. To my knowledge, no other automaker ever produced such an unusual wheel. And I am not talking about the way it looked (which was cool in its own right – and based, according to designer Bill Porter, on the Buckminster Fuller “buckeyeballs” of physics fame). I’m talking about the way they were made.

Pontiac developed a radical (for the era) and previously untried method of wheel-building they called “polycasting.” What it meant was a steel rim formed the structural element, with a composite urethane material injection molded onto the facing to produce the ornamental part – the “honeycomb” lattice.

These were not aluminum rims – even though they looked it. The idea was to produce a wheel that had the structure and toughness of a steel rim with the appearance of alloy. They really looked great, too. But they were also heavy. Which is why they were replaced in 1977 with the (aluminum) snowflake wheel, which was actually how Porter wanted the Honeycomb rims to be made originally. Heavy though they may have been, the Honeycombs give the ’70s-era Trans-Am a distinctive appearance – and a great story to tell people, too.

Some don’t like the shovelnose front end of the ’75-’76 cars – which actually appeared in ’74 but was fully developed by ’76, by which time the awkward black rub strips had been replaced by a completely body-colored and fully integrated  “bumperless” look. I agree it’s not as aggressive as the earlier ’70-’73 models, but it grows on you and if you attend a few Pontiac shows – were there are usually many more of the ’77-up cars with the quad headlights and Batmobile front end – you begin to appreciate the different look of the transition year cars. The ’76s look best, I think, because the nosepiece looks like a single unit.

There are many more subtle differences and details, too. Many casual observers think the bodywork of second gen TAs (1970-1981) is mostly the same. They’re wrong. Take, for example, a ’76 vs. a ’77 (and later) TA. The hoods are totally different (the earlier hoods are pleated vs. the flat) hoods used on the later models). Not one front end piece interchanges; the front fenders are year specific and the rear quarters are different.

So are the spoilers (and the trunk whale tale’s end caps).

The ’77-up shaker is smaller, too – and purely ornamental. On the ’76 (and ’75-’74) TAs, the basic assembly was still the same as the factory functional Ram Air set-up on the ’70-’73s – except for a block-off plate that was easily removed to allow fresh air in – and allow the roar of the Q-Jet’s secondaries opening up to be heard far and wide. On the later cars, it’s necessary to cut out a hole to make the scoop work – which of course permanently ruins the scoop.

But there’s all that potential… and it still says “455” on the scoop – which is a coolness unto itself that “6.6 litres” will never equal. 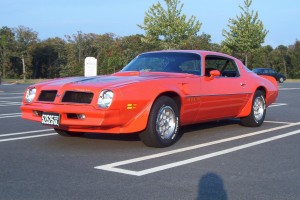