Have you noticed how expensive tires – even basic tires – have become?

Your run-of-the-mill radial now runs close to $100 (less mounting, tire stems and all that). It’s easy to drop $400 or more to replace all four tires – and that’s for an “economy” car. If you own a late-model family car, it can be a lot more than that.

Reason? Wheels (and so it follows, tires) have gotten bigger – and thus, they cost more.

Most compact (and even subcompact) cars now come standard with at least 15 inch wheels; sixteens are common and often you see 17s and even 18s. Not a single 2011 model year mid-sized family sedan comes with anything smaller than a sixteen-inch rim.

In the past, cheap cars came with cheap tires. 1980’s-era Chrysler K-cars came with 13-inch stamped steel wheels. You could buy a new tire for $30. As recently as the mid-1990s, economy-type cars still came with economy-type wheels -and affordable tires.

Then came rap culture and with it, the (still current) obsession with ever-bigger “rims.”

Large wheel/tire packages have always existed – but as specialty equipment associated with performance cars. This business of putting 16-inch rims of basic economy cars and 17-18 inch rims on family sedans and minivans is a New Thing – and by any sane standard, not a good thing.

It’s not just the cost of the tires that gets you, either.

Sixteen, seventeen and eighteen-inch rims are taller, which means the tires they’re shod with have shorter – and stiffer – sidewalls. That, in turn, results in a harsher ride. And the rims themselves, being made of alloy rather than steel, are more delicate. One bad pothole or curb-bump can ruin them.

Have you checked the price of a new factory alloy rim lately?

Steel wheels can take more abuse – and they’re much less expensive to replace if you do manage to mess one up.

Low aspect ratio tires (the fancy name for tires with short sidewalls) also wear faster, so you get to pay to replaced them more often, too.

You’d think common sense would object to all this – at least insofar as “basic” and “family” type cars are concerned. Economy cars, family cars; minivans. No one autocrosses these things; they don’t run at Autobahn speeds. People just poke around in them, commuting to the office, going to the store, picking up the kids, cruise-controlling it down the highway at 70.

They are Transportation Modules.

The idea that an economy compact needs 16 inch rims – and that a family sedan or minivan needs 17 or 18-inch rims – is as ridiculous as a SubZero freezer in a standard-issue suburban townhouse.

But common sense no longer determines vehicle design. People have been convinced by PR – and by the rip-tide tug of “culture,” which currently embraces everything related to rap culture – that large wheel/tire packages are must-haves … even if it bankrupts them.

But what’s not ok by me is that the cattle-like stampede of “trendiness” has the side-effect of making life more expensive for people who don’t give a damn about being trendy and like things that do make sense – like basic wheel/tire packages for basic transportation cars.

Because so few current-year (and recent vintage) cars – including economy cars – come with 13 or 14 inch wheels, the price of smaller tires in 13 and 14 inch sizes is going up as the supply of them goes down. It is actually getting hard to find tires in these sizes at all. In a few more years, it may be that the only way to get a set for your old econo-car will be to buy them from a specialty tire maker like Coker.

But by then, of course, we may all be broke anyhow. 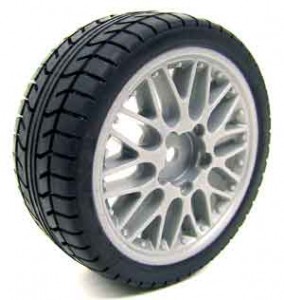