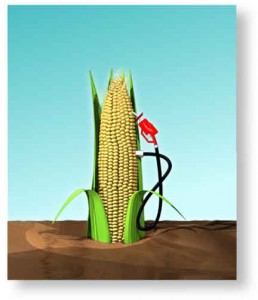 If it was built before the 1980s, your vehicle was designed to burn gasoline – and nothing else.

That’s what was sold back then, so it’s what the engineers assumed when they designed the engines. Gaskets and seals were made to handle gas, not alcohol. Air-fuel ratios, ignition timing and so on were set assuming the fuel that would be burned would be … gasoline.

But then the government – after being strong-armed by the politically powerful corn lobby – began mandating that gasoline be “oxygenated” (that is, adulterated) with up to 10 percent ethanol, which is alcohol made from corn.

The theory put forward was that this would cut down vehicle exhaust emissions by “leaning out” the fuel mixture fed the engine. The actual result was it did no such thing. Chiefly, because most of the cars in service by the time the mandates began to go into effect in the 1980s were modern cars.

And modern cars are built with computers and fuel injection. They have the capability to self-adjust their air-fuel mixture and so automatically compensated for the leaner (less gas, more alcohol) fuel. Their emissions didn’t go down – but their mileage did. Alcohol, as a fuel, contains much less energy per unit of volume than gas, so the more of it there is in your tank, the shorter will be the distance you can go before it’s time to fill up again. Drivers typically experienced a noticeable drop in fuel economy of about 5 percent when using “oxygenated,” alcohol-laced fuels.

Older cars on the other hand (mostly models built before the early 1980s) had mostly been retired from service as daily drivers by the time the ethanol mandates began to go into effect. Fewer than 5 percent of the cars in regular use by 1990 were older than model year 1975. As of today, it’s unusual to see a car built before 1981 (the first year GM cars came equipped with an early engine computer) outside of a museum or a cruise night at the local drive-in. They are a non-factor as far as emissions/pollution issues are concerned – which means, there’s no longer any legitimate to reason to introduce ethanol into the fuel supply (especially in large concentrations). The “renewable fuels” prop is just that – a prop. Yes, you can grow corn year after year, so in that sense corn-based alcohol fuel is “renewable.” But it requires more energy input – including petroleum-based fertilizer to maximize crop yields – than you end up getting out of the stuff. Plus, we’d have to turn most of the country’s agriculture production over to corn production – not for food, mind you. But for fuel.

Meanwhile, old cars. Because they don’t have computers, they can’t self-adjust for ethanol-laced fuels. So they run terribly on alcohol-laced fuels. They also develop potentially dangerous problems such as fuel leaks, because the rubber fuel lines and gaskets used in their systems were not made to handle alcohol, which is reactive and corrosive. Serious problems have been reported with older cars’ carburetors when high-alcohol-content fuel is used in them.

That was with 10 percent ethanol fuel. What will happen when the Feds mandate [I]15 percent[/I] ethanol fuel?

Apparently, that’s just what’s about to happen. The Environmental Protection Agency is expected to issue a regulatory decision this fall that will require a 15 percent ethanol concentration in all “gasoline” sold in the United States. Up to now, concentrations higher than 10 percent have actually been illegal – precisely because of the many known problems that high-alcohol-content fuels cause – including high exhaust temperatures, which in a late-model car can toast the catalytic converter. (Many new car warranties contain language that specifically states that coverage will be forfeit if the vehicle is fed “gas” with more than 10 percent ethanol content for precisely this reason.)

What will happen to an older car fed this 15 percent alcohol concoction? If it’s still got its original fuel lines/internals, major refitting will probably be necessary not just to keep it running properly but to avoid potentially catastrophic problems such as engine fires resulting from highly combustible alcohol fuels leaching through hoses and seals not designed to tolerate it. At minimum, it will be necessary to re-tune the engine and its fuel system to accommodate the high-alcohol-content fuel. The carburetor will likely need to be torn down and rebuilt with alcohol-compatible internal parts, including floats and accelerator pumps/power pistons; they’ll need to be re-jetted and the mixture adjusted to compensate. All rubber fuel lines will need to be replaced with modern hoses rated to handle alcohol fuels. There could be problems with corrosion in hard steel fuel lines and gas tanks not designed to tolerate alcohol fuels, too.

All for what? So that the politically powerful corn lobby gets to shove its pockets even deeper into the pockets of American drivers.

And quite possibly, cost classic car owners a great deal of trouble on top of that.

Here’s a good video on the ethanol scam: