Minivans started out as utilitarian, family-intended vehicles. They were clunky-looking, pretty slow – and swathed in hard plastics.

But on the upside, they were inexpensive, easy to clean – and so perfect for carting kids around.

Today, most minivans are more like luxury motor coaches – with captain’s chairs, leather and wood trim, all sorts of fancy equipment. Which is great if you want all that, but not so great if you just want something basic – a bus to cart around the family that won’t kill the family budget. A solid appliance that gets the job done.

The Journey is a medium-large, three-row minivan in all but name. Prices start at $20,490 for the base SE with front-wheel-drive and four-cylinder engine.

A major restyle is coming for 2011 so changes to the 2010 model are limited to a revised (larger) LCD display for the optional rear-seat entertainment system and new active/anti-whiplash head restraints and keyless entry – which are now standard in all trims.

The Journey starts out $1,300 less than the base Grand Caravan ($21,800) and $1,705 less than a Kia Sedona ($22,195) which are currently the lowest-priced traditional minivans on the market. But you can expect to pay even less because the Journey is not a hot-seller – or remotely trendy. You could probably take one home for around $18k.

Stately (and impressively quiet) ride. Lots of useful features, including a storage compartment under the flip-forward front-passenger seat and an available Chill Zone mini-fridge built into the glovebox.

Atrocious gas mileage with the optional V-6 and AWD (15 mpg city!) but you don’t get snappy acceleration to go with it. It’s still slow.

Base four-cylinder version is worse – but at least it doesn’t burn gas like an out-of-tune ’76 Eldorado.

Dodge’s rep not the greatest.

The Journey comes standard with a four cylinder engine – making it one of the few vehicles this size (and weight) available with less than a V-6. The 2.4 liter engine produces 173 hp and drives the front wheels through a four-speed automatic transmission. You can’t order all-wheel-drive with the four-cyinder because the additional weight and load would just be too much for this already over-taxed engine to deal with.

It takes 10-plus seconds to reach 60 mph with the 2.4 liter engine – considerably more if the Journey is carrying a full load of people.

The optional engine is a 3.5 liter, 235 hp V-6 which also comes with a six-speed automatic and either FWD or (optionally) AWD.

Adding the V-6 also adds about 200 pounds of weight, which pushes the Journey’s total bulk to over 4,000 pounds even before people get in. As a result, acceleration even with the V-6 is still a weak point: It takes more than 9 seconds to reach 60 mph. And fuel economy dips to 15 city, 23 highway with the optional AWD system.

The Journey’s best attribute is a super smooth, quiet – even luxurious – ride. You’ll read other reviewers making fun of the Journey’s cheapie-looking interior materials and they’re right – but the thing rides beautifully and would be ideal for an 800 miler on the Interstate.

Some reviewers also fault the Journey’s handling – but you should take that with a grain of salt, too. Many reviewers expect every vehicle they test- drive to corner like a Porsche, confidently taking decreasing radius freeway on-ramps posted 35 mph at 60. But no minivan-like vehicle is set up to perform this way – and more to the point, people who buy minivan-like vehicles don’t drive them that way. So the measuring stick – high-speed/high-performance handling ability – is not realistic.

In the kind of normal, everyday driving that a vehicle like the Journey is likely to experience, its handling is acceptable. It goes where you turn the wheel, the tires don’t squeal or shriek as you go around corners (at normal speeds), the body doesn’t heave or sway uncomfortably. It’s a perfectly competent family bus – and that’s the measuring stick that ought to matter. In all honesty, the Journey handles better when driven aggressively than a Toyota Sienna – a “bue chip” minivan that costs thousands more but which lurches around like an overloaded oil tanker when pushed.

The Journey’s weakest point is acceleration. The four-cylinder version is ok for stop-and-go commuting duty but has no reserves for passing or merging and often struggles just to maintain speed on the highway, especially on uphill stretches.

The optional V-6 endows the Journey with adequate acceleration and it feels snappier (in part because of the more favorable gearing of the six-speed automatic) but zero to 60 in 9 seconds is not quick – while 15 mpg city is barely better than a Cadillac Escalade manages – 14 city – with a 6.2 liter V-8 and 403 hp.

Dodge markets the Journey as a crossover SUV but it’s really a minivan without the sliding doors – and so it doesn’t suffer as much from The Obvious Minivan Stigma. This – and the Journey’s low MSRP – are among its chief draws.

Like the popular Grand Caravan “out of the closet” minivans, the Journey has many cool/useful features, such as a front seat cushion that flips forward to reveal a large storage area underneath and an optionally available Chill Zone beverage cooler built into the glovebox. You can order a built-in child safety seat for the second row – and there’s even a small, removable flashlight built into the side panel of the cargo area out back.

Three-zone climate control is available so that occupants in the rear seats can adjust the temperature to their liking. The second row seats slide and fold, so it’s easy to access the optional third row. Space in the third row is limited but it’s kid-friendly and gives the Journey more usability than two row-only competitors.

Cupholders abound – two up front in the center console (mounted low, near the floor, which is a good idea because it keeps spillage away from sensitive electronics) plus two more molded into the door side panels, plus two more for the second row plus another two for the third row. The second row also has a pair of power points to run laptops and such. There are two large gloveboxes up front, plus a large/deep storage cubby in the console between the driver and front seat passenger seats.

The hard plastic trim covers/dash and door panels do look cheap but they’re easier to clean and will take more abuse than the softer/fancier materials found in higher-end vans. The basic breadbox dash layout (gas gauge, temperature gauge, speedometer and tach with a small digital “information center”) is simple and functional.

With the third row folded flat, the Journey has 68 cubic feet of cargo capacity.

The Journey comes off as a little on the low-rent side, but that’s also why it’s so affordable. It really depends on what you’re after here. If I had a brood of messy kids and needed a vehicle that was going to get trashed by them, the last thing I’d want is a $38,000 leather-swathed luxo-van. I’d rather get a nice sports car/sedan for me – and a cheap but functional bus for the kids.

The chief objective downside with the Journey is Dodge’s not-so-spectacular quality control – and the iffy prospects of Dodge (Chrysler Corporation) which could still go bust and be gone long before you make your final payment. The uncertainty is unsettling – and the flip side of that low up-front price is that resale/trade-in values for this vehicle are apt to be equally low.

The basic warranty is three years/36,000 miles – but Dodge has upped the powertran coverage to a more confidence-inspiring five years/100,000 miles.

It’s not fancy, it’s not quick – but it Gits ‘er Done for a lowball price. If you need a vehicle like that, the Journey could be worth a look. 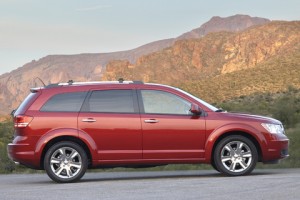