Can there be such a thing as a sporty economy car? And if it’s doable, is it sensible?

Toyota says the answer to both questions is the ’10 Yaris Sport.

Prices run from $12,605 for the base hatchback coupe w/manual transmission to $14,165 for a base sedan with automatic.

The Sport package can be added to any of the three bodystyles – and adds between $2,665-$3,055 to the window sticker.

All trims levels now come standard with traction/stability control; otherwise, the 2010 Yaris is mostly the same as last year’s model.

Good use of space inside; multiple bodystyles available

Not the Latest Thing.

All versions of the Yaris come equipped with the same engine – a 1.5 liter four fitted with Toyota’s variable valve timing system (VVTi) and 106 hp driving the front wheels.

The standard transmission is a five-speed manual; a four-speed automatic is optional.

With the manual – and the wind at your back – it’s possible to get to 60 mph in just over 10 seconds. But just barely. With the automatic, the car feels – and is – noticeably slower.

Of course, “performance” – when you’re shopping a car like the Yaris – probably means low up-front costs and high fuel efficiency rather than scorching acceleration. And here the Yaris’ stats are more appealing: Not quite $13k sticker and 36 MPGs on the highway (29 in city driving).

Still, the Yaris is one of the most fuel-efficient gas-burning, non-hybrid new cars on the road right now.

Pretty much the only model that beats it – just barely – is the new/2011 Ford Fiesta sedan, which can hit 37 MPGs on the highway. But the Fiesta’s base price of $13,320 is about $400 higher than the price of the equivalent Yaris sedan – negating the Ford’s slight mileage advantage.

The Yaris is tiny little nugget of a car – but more comfortable inside than you’d expect because of the fairly long (for a subcompact) wheelbase, which really opens up the cabin. The “out there” front and rear axle centerlines anchor the four corners of the car – but there’s not much else ahead of (or behind) them.

This takes a little getting used to, especially if you’re used to larger-on-the-outside cars. From behind the wheel, you feel the road’s almost physically unfolding into your lap as you go. You may also find yourself praying that the engine doesn’t end up there, too, if you run into something.

On the plus side, you know just how much room you’ve got left when you’re trying to snug up close to something or parallel park; also, it’s as easy to steer as a Moped – and will fit just about anyplace a Moped would, too.

The three-door hatchback especially is a fantastic little knock-about/city car.

The Yaris’ wheelbase of 100.4 inches (sedan) is actually only slightly less than the 102.4 inch wheelbase of the physically much larger (and longer and heavier) Toyota Corolla – which is 178.7 inches long from nose to snout vs. 169.3 inches for the Yaris sedan.

So, although the Yaris may look like a clown car, it doesn’t drive (or handle) like one. It may not be ideal for extended highway trips, it can handle them – unlike, say, a SmartForTwo.

The Sport package doesn’t up the horsepower ante, but does give the car a firmer ride and sportier handling feel via a fiteen-inch alloy wheel/performance tire package. You also get a body kit (rocker panel extensions, rear spoiler, different front clip with integrated driving lights) along with various electronic and power equipment upgrades, including remote keyless entry, premium stereo, etc. – depending on which of the two packages you choose.

One iffy point is the Yaris’ optional 4-speed automatic. It is dated technology for 2010, given that most economy cars now offer five or even six-speed automatics. The Yaris’ old-timey slushbox rummages back and forth between third and fourth (overdrive) gear excessively, especially on hilly roads – which makes the car feel as though it’s sweating hard to maintain its pace. The five-speed manual offers better control – and better mileage, too. Plus, you can save $800 “up front” by sticking with the manual over the extra-cost automatic.

The Yaris’ beauty lies not in its appearance but rather its functionality. Everything is designed for a purpose, not aesthetics – the pushed-to-the-corners axle centerlines being one example. Another is the centrally-mounted instrument cluster – which can be canted to the left for American markets and to the right for export markets. No need to make two different dashboards for the same car in order to sell it in multiple markets. This helps save Toyota money, which helps keep the price of the Yaris in check.

Other highly functional design features include fold-out cup holders built into the left and right hand sides of the dash – which I think is more convenient than the usual console-mounted arrangement. Also, there’s an extra glovebox in front of the driver – courtesy of the room made by the centrally mounted instrument cluster.

On the passenger side, there’s a double glovebox – so you get three total in-dash storage areas.

Cargo capacity is 13 cubic feet – a little better than the Fiesta, Rio and Aveo (12.8, 12 and 12.5 cubic feet, respectively) and a bit less than the Nissan Versa (14 cubic feet). The Honda Fit kills them all on cargo with its amazing 57 cubic feet of capacity (back seats folded flat; even with the second row up, the Fit has 20.6 cubic feet of cargo space available). The downside, of course, is the Fit’s not so economical price – which starts at $14,900 – about $1,500 more than the base price of a Yaris sedan and nearly five grand more than what you could buy a new Versa for.

Toyota’s been hit hard by all the recent bad press over run-amok acceleration; the Yaris hasn’t been affected by the recalls, but it’s likely its resale value will be lower as a result of the taint affecting Toyotas across the board. On the other hand, you can expect to negotiate a better deal on one for just that reason – and since there’s nothing wrong with the Yaris, that’s money in your bank at the expense of other people’s perceptions. 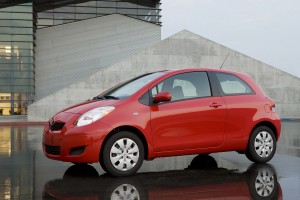 As Toyota’s value leader, the Yaris makes a solid case for itself. However, if the whole point is saving money, I’d skip the Sport package, buy the as-it-sits Yaris – and put the $2-$3k you just saved toward gas money.