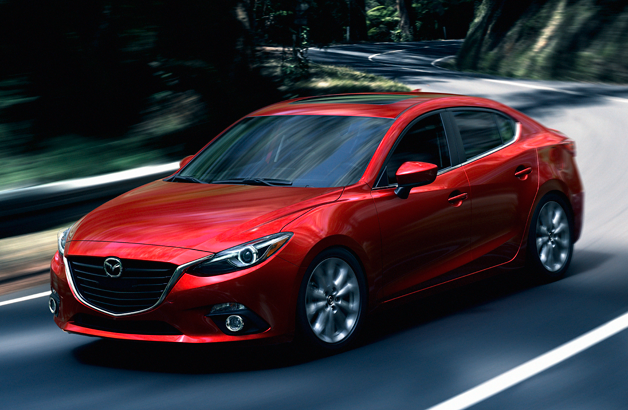 Some small cars are bigger than others. 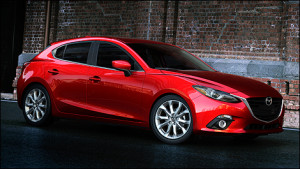 Sexier and roomier – and quicker – too.

One of them also gets better gas mileage than its rivals.

The new Mazda3. It’s what Mark Twain might have called a sockdollager. I call it one of the most impressive new cars I’ve driven recently – because it so clearly outclasses the competition.

Yeah, I’m excited – and maybe you should be, too. 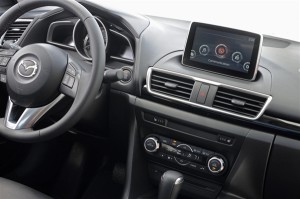 The 3 is technically in the compact sporty sedan/hatchback wagon class – but it is larger (and roomier) than others in this class, including the Ford Focus and Hyundai Elantra. It’s also available with more engine (2.5 liters, 184 hp) than most and gets better MPGs than all (39 highway with this engine; 41 with the standard 2.0 engine) its competitors.

You can go sedan – or hatchback sedan. 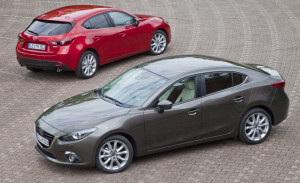 The high-performance MazdaSpeed3 is absent from the lineup . . . for the moment. But look for it to make a dramatic return later this year (fall 2014), probably as an early 2015 model. It is rumored the car will offer all-wheel-drive, as well as its signature turbocharged engine.

Six-speed manual available in most trims. 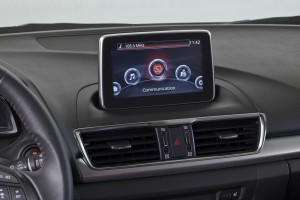 Infotainment system sometimes freezes up. Or did for me during my week-long test drive. 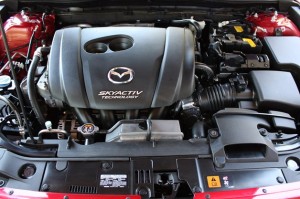 Mazda offers two drivetrain options in the 3 – with a third hopefully on deck for later this year.

First up – and standard equipment in the lower trims – is a 2.0 liter, 155 hp engine paired with either a six-speed manual transmission or (optionally) a six-speed automatic. This engine features Mazda’s “SkyActiv-G” technology, including very high (14:1) compression – which results in very high fuel efficiency: 30 city, 41 highway.

These numbers are tops in the class, out-classing the Ford Focus even when that competitor is equipped with its extra-cost Super Fuel Economy Package (28 city/40 highway) as well as the Hyundai Elantra: best effort -28 city, 38 highway with its optional automatic transmission.

A big 3 “plus” is that the high-compression/high-performance SkyActive engine runs on regular – not premium – fuel. And that fuel economy doesn’t drop by a noticeable amount if you stick with the stick. 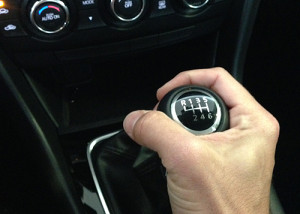 It does  . . .when you choose the manual transmission in competitor models.

The six-speed manual-equipped 3 rates 29 city, 41 highway  – just 1 MPG less (in city driving) than with the optional six-speed automatic. But the Focus drops to 26 city, 36 highway when that car is ordered with a manual transmission. Which, by the way, is a five-speed manual. You get one less gear to play with – and lose 5 MPG on the highway, too.

The Hyunda Elantra (and Elantra GT) can be ordered with a  a six-speed manual – but so equipped, its fuel economy is also lower: 27 city, 37 highway for the sedan vs. 28 city, 38 for the same car with its optional  automatic. 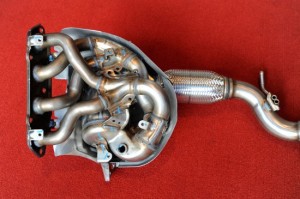 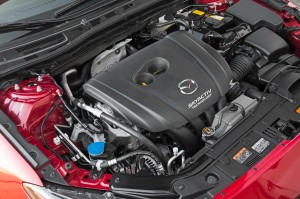 If more scoot is wanted, Mazda offers an underhood upgrade to 2.5 liters and 184 hp – the same engine that’s standard in the new Mazda6. This is also more engine than you’ll find in the competition – excepting the special high-performance version of the Ford Focus (the Focus ST). The regular Focus maxxes out at 160 hp; the Hyundai Elantra at 173 hp (with its optional 2.0 engine in lieu of the standard 1.8 liter, 145 hp engine).

Plus number four is that this version of the 3 still gets exceptionally good gas mileage: 28 city, 39 highway. This is only slightly less than the 2.0 engine delivers – and better than the 160 hp-engined Ford Focus delivers.

Ditto that with regard to the optional-engined Elantra – which rates just 24 city, 34 highway. 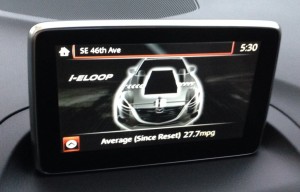 You can order the 2.5 engine with an “i-ELOOP” max-effort fuel economy package that includes a regenerative braking system similar to that used in hybrid cars. It bumps the already-outstanding (class-best) mileage of the 2.5 liter engine by up to 10 percent, according to Mazda – putting the highway number into the 40s.

The only negative – if you’re third pedal inclined – is that Mazda only sells the 2.5 liter engine with the six-speed automatic.

To begin with, the base-engined 3 isn’t underpowered. Several of its competitors – most notably the slo-mo’ 1.8 liter Hyundai Elantra – are charter members of the Nine Second Club. And to cancel your membership, it’s necessary to buy the extra-cost/optional engines available in these models. 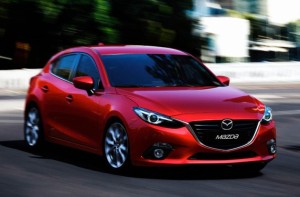 The Mazda’s standard 2.0 engine and six-speed (either way, manual or automatic) is lively enough to make upgrading to the larger/stronger 2.5 engine an indulgence, not a necessity. That it’s also the class leader when it comes to gas mileage only sweetens the pot. Competitors have consoled buyers of their base engined models with fairly favorable fuel economy. Better performance is available – but it’ll cost you. Up front – and at the pump.

Along comes Mazda with a car that imposes no such compromises. It outruns its rivals when you floor the gas pedal – but it doesn’t use as much gas as they do when you do floor it. 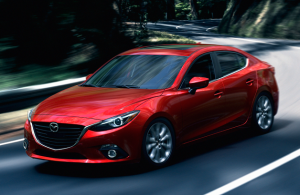 And then there’s that optional 2.5 liter engine. More performance – with almost-no-at-the-pump-penalty. If only Mazda would offer the 2.5 engine with the manual trans. But that might be piling on.

Tightness is another 3 superlative. Literally. The car’s turning circle is more than a foot tighter than that of the Ford Focus (34.8 vs. 36 feet) and that’s a big difference, just like the difference in back seat real estate (more about that follows below). The Hyundai Elantra’s turning circle is the same 34.8 feet, but it is hobbled by a weak base engine – and so-so fuel economy. 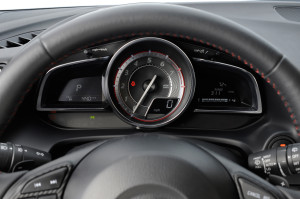 I’m a big fan of Mazda’s suspension tuning – which in my opinion/experience is as close to “BMW” as any FWD-based car you can buy. The ride quality is compliant, but expertly damped. The car leavens out the road, adapting to dips and bumps with an admirable absence of reverb shock. Some cars achieve flat cornering by cinching the works down – but the downside is a stiff and sometimes bouncy ride that gets old in a daily driver. The 3 corners adroitly, but rides supple – and that’s the ticket in a daily driver. Like the gas mileage – and power/performance. Have your cake and eat it, too.

A word on the seats: They are superior. Like the suspension, they are supportive but soft at the same time. At one point, I spent three-plus hours driving the 3 and my cheeks never complained. 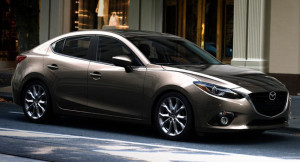 The new 3 looks more substantial than its predecessor – and its competitors.

But where the dimensions markedly differ is inside. 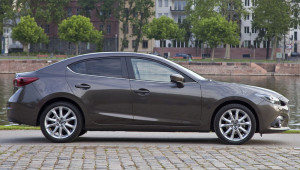 The 3’s got mid-sized car back seats (35.8 inches) vs. the compact car- accommodations in the Ford (33.2 inches) and Hyundai (33.1 inches). This is a difference you’ll notice immediately – and one that matters if you have long legs or a tall family.

Trunk space in the sedan’s no great shakes – 12.4 cubes – but if you need more cargo room, the hatchback’s got you covered: 20.2 cubes with the back seats upright; 47.1 cubs when they’re folded down. This is less than in the Focus (23.8 and 44.8 cubes, respectively) and the Elantra GT hatchback (23 and 51 cubes, respectively) but it’s not a glaring deficit – especially in view of the 3’s other charms.

Which include a seriously beautiful bod. 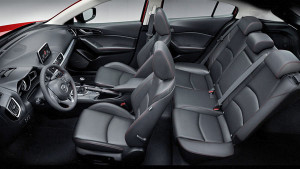 The 3 looks like a two-thirds scale Mazda6 – and the 6 is maybe the best-looking car in its class. The 3 uses the same themes to the same good effect: Long nose – relative to the rest of the car (a WWII-era Focke-Wulf 190D comes to mind; this model was fitted with a Benz V-12 in lieu of the usual radial engine in regular 190s). Voluptuous metal flows forward like a tidal surge over the front wheels. Upward swooshing side scallops are pressed into the door panels; the back door glass tapers to a point like eyes squinting in a slipstream.

This car look like a million bucks – or at least, it looks like a lot more than its not-quite-$17k-to-start MSRP. 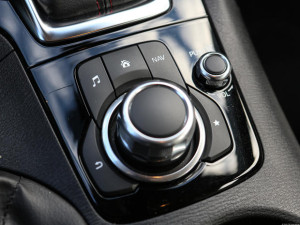 My test car had leather seats – with heaters. Not included in the $49k BMW. Plus a slick-looking LCD display with HD satellite radio and GPS and a bunch of other features. The BMW didn’t have satellite radio – or GPS.

These cost extra, too. 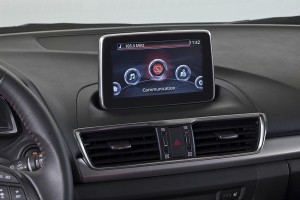 Buy two of them instead of the one 328i – and you’d still have a few thousand left over for gas.

Speaking of which: The diesel BMW was averaging 36.4 MPG – according to the car’s computer. The gas-engined Mazda3 was averaging 33.1 – a real-wold difference of maybe 3-4 MPG. Take into account that diesel fuel costs about 50 cents more per gallon and … well …

Somewhere in my head, I can hear George “the Kingfish” Stevens saying now lookee here… 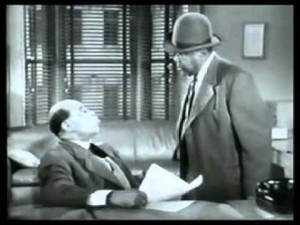 How can you not feel affection for a car that is almost as economical with a gas engine as a much more expensive car is with a diesel? That comes with more amenities – for literally half the money?

BMW, et al, need to wake up and smell the java. The ground underneath them is shifting.

The new 3 was supposed to have been released with Mazda’s Sky-D 2.2 liter diesel engine as an available option, but it’s a no-go so far. 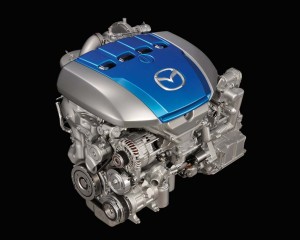 In the UK and other European markets, Mazda will sell you a new 3 with diesel power right now  . . . and without urea injection. It’s available with a six-speed manual transmission, too. How’s about zero to 60 in just over 8 seconds –  about as quick as the 3 with the gas 2.0 engine. 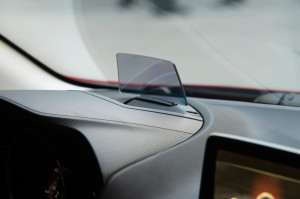 The 3 does offer several things right now that you won’t find in competitors – including automated braking (Smart City Brake Support) which applies the brakes if you don’t. I’m not a big fan of idiot-proofing – and let’s face it, that’s what this is. But it’s the wave of the future and Mazda’s among the first to offer this technology in an entry-level car. The 3 can also be equipped with a Heads-up Display (HUD), Lane Departure Warning, Adaptive Cruise Control and a Blind Spot/Cross Traffic Warning system.

One other thing: My test car’s infotainment/GPS system occasionally froze up. This happened twice, to be precise. I had to reboot the system – stop the car, turn off the car, re-start the car – to unclog whatever the software logjam was/is. I checked around and found a few reports of similar issues posted by 3 owners, so be aware of this. It’s a new car – with a new suite of electronics – and sometimes, there are bugs. 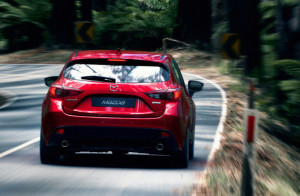 Luca Brasi from The Godfather needed a gun to make an offer you couldn’t refuse. Mazda dealers won’t need to do much more than hold open the door for you.

This car sells itself.