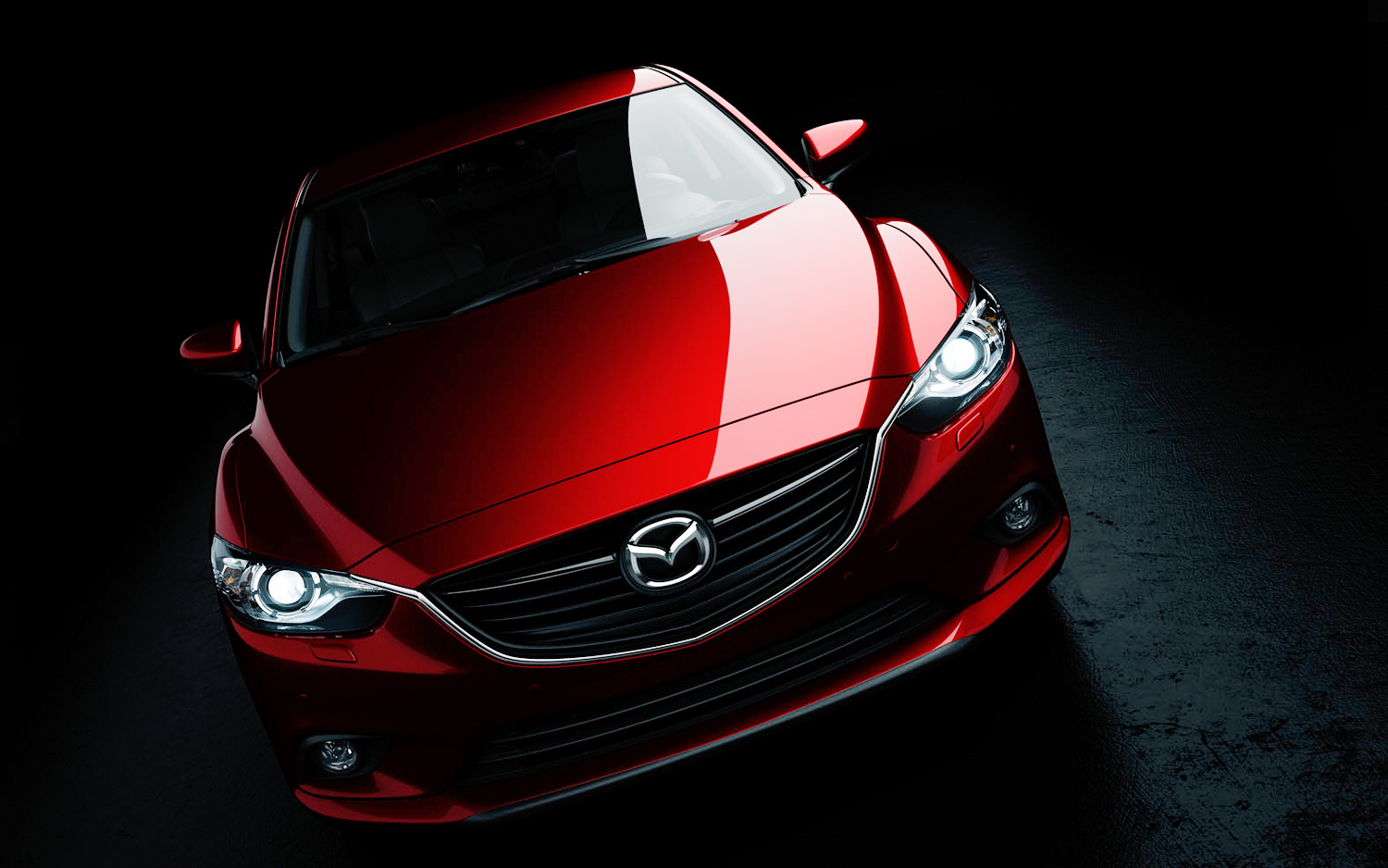 Cue ’80s-era Queen… another one bites the dust. 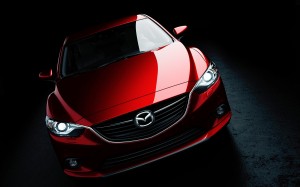 Even better news: A “SkyActiv-D” 2.2 liter turbo-diesel – and 40-plus MPG – is on deck for the 6 later in the model year. Reportedly, the diesel-powered 6 will also be quicker than the gas-engined 6. Look out, VW Passat TDI. 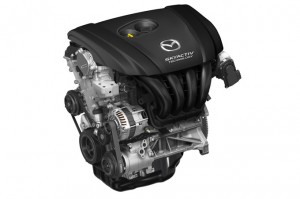 The bad news is the diesel won’t be available for awhile. Also, there is a gorgeous wagon version of the new 6 that won’t be sold here. It’s an export-market only deal – because Mazda believes not enough Americans are interested in sportwagons.

And no more 272 hp. So, no more low six-second to 60 runs. The formerly available 3.7 liter V-6 was just too thirsty (18 city, 27 highway) for current – and pending – political realities. In two model years (2016) all new cars will have to average 35.5 MPG, courtesy of Uncle Sam’s edicts – or saddle their manufacturers – and thus, buyers – with onerous gas guzzler taxes.

Still, Mazda has done more than put lipstick on a pig by making the 2014’s four better than last year’s four.

Let’s get into that now. 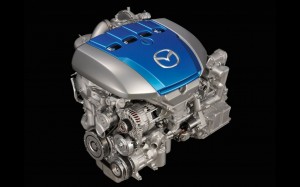 The 6 is Mazda’s Altima-Fusion-Optima fighter, with the chief difference between it and them being efficient sportiness. It no longer offers a powerful but consumptive V-6 engine, but it does offer a highly fuel-efficient four cylinder engine – with an even more fuel efficient (and sportier) turbo-diesel engine on deck. 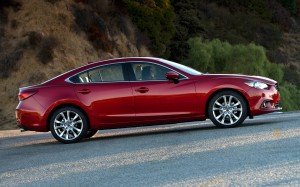 The pending SkyActiv diesel version of the new 6 will directly challenge the efficiency hegemony of the VW Passat TDI – which lists for $26,225.

At the time of this review, Mazda had not released any details about what the price of a Sky-D equipped 6 might be. If it’s significantly less than the $26k  VW is asking for the TDI Passat, it’s going to get very interesting.

Arguably one of the best-looking cars in this class – and for this coin.

Pending diesel engine will give the 6 better performance – and close to hybrid-car fuel efficiency. 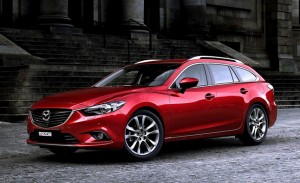 New four maxxes out at 184 hp – which looks a bit weak relative to several competitors’ available 250-plus hp V-6s (and turbo fours).

SkyActiv diesel engine should be on the menu now – not later.

No wagon for us. 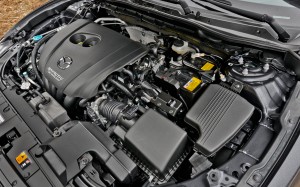 The object appears to have been to bridge the gap between last year’s too-weak/too-slow base-engined 6 – and the too-thirsty V-6 that was optional but which one almost had to buy because the base four (in the old 6) wasn’t getting it done, performance-wise.

The updated four in the new 6 rates a very solid 26 city/38 highway – and gets the car to 60 in 7.5-7.6 seconds, depending on the transmission: your choice of six speed manual or six-speed automatic. This is a big improvement over the old four-cylinder 6’s glacial 9 second run – and not-so-hot 21 city, 30 highway EPA mileage stats.

It’s also only about a second or so off the pace of last year’s 6 with its optional V-6 – and more important, very competitive with the performance of base-engined versions of cars like the Ford Fusion – which takes more than 9 seconds to reach 60 with its standard-issue 2.5 liter, 175 hp four – or the base-engined Kia Optima, which also needs about 9 seconds to reach 60. 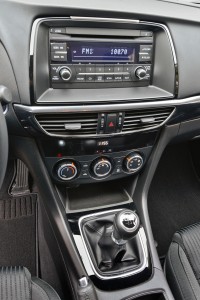 In fact, the only competitor that’s as quick as the new 6 in base-engined form is the just-updated Accord, which gets there in the same 7.5 second range (and also rates a very respectable 27 city, 36 highway).

But there will inevitably be comparisons between the power/performance offered by the new 6 – which is after all, a sporty-minded car – and sporty-minded competitors like the Optima and Accord, Altima and Fusion when fitted with their much stronger optional engines  . . . which Mazda hasn’t got an answer for at the moment.

The Kia Optima can be equipped with a 274 hp turbo 2.0 four that beats the turbo Fusion – and runs circles around the 6 – with a 6.5 second to 60 posting. It also carries a very impressive (given the power/performance) EPA fuel efficiency rating of 22 city, 34 highway.

And models like the Honda Accord and Nissan Altima (and some others, including the Toyota Camry) still offer very potent V-6 engines. In the case of the Accord, a 278 hp 3.5 liter V-6 that rockets this car to 60 in six seconds flat. It’s not a hog, either: EPA says 21 city, 34 highway – which isn’t at all that far behind the Mazda’s 26 city, 38 highway. 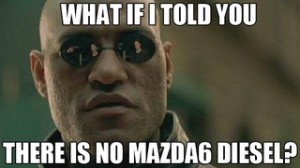 But, Mazda’s got a one-up: That 2.2 liter SkyActiv-D turbo-diesel that’s in the works for later in the model year. It will – reportedly – provide better acceleration than the current 2.5 liter gas engine in addition to better fuel economy (more than 40 MPG on the highway and probably 30 or better in city driving).

Unfortunately for Mazda buyers, the Sky-D diesel engine will not be available in the 6 until sometime next calendar year. 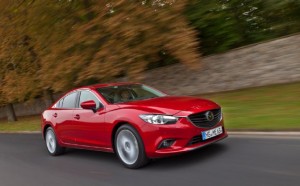 The Sky-G engine is a very torquey, quiet and smooth powerplant. The nearly 20 lbs.-ft. bump in output is particularly relevant insofar as how the car pulls. Not only is there more torque than last year, it’s available almost 800 RPM sooner – at 3,250 revs vs. the old non-Sky-G four’s 167 lbs.-ft at 4,000.

However  . . . today’s four cylinder engines have the same issue to overcome that modern diesel engines have had to overcome. The perception issue – based on what these engines were like 20 or 30 years ago. Back then, diesels were slow – and smelly.

They are neither today.

Similarly, wonders have been worked with today’s small-displacement (and non-turbo) gas engines. The Sky-G’s 184 hp out of 2.5 liters is more hp than was being pulled out of bigger sixxes just 10 or 15 years ago – and more than some V-8s were making 25 years ago. 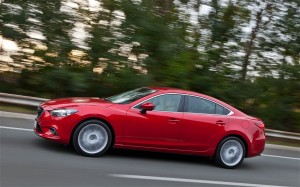 If you were to tele-port a new Mazda6 back to the early Reagan years, you’d find yourself keeping up with Corvettes – no, really – and obliterating the typical family sedans of that era. A mid seven second 0-60 run circa 1983 would have been smiled upon as extremely speedy. And from a car capable of averaging 34.2 MPG (as I did, during my week-long test drive). . . ?

Are you kidding me? Where do I sign up?

Still, many people regard fours – especially if they’re not turbocharged fours – as fundamentally economy car engines. This is ok if the car is an economy car. But the 6 isn’t primarily – or even secondarily – an economy car. It is primarily a sporty car. People who shop sporty cars expect things to happen when they push down on the gas pedal. 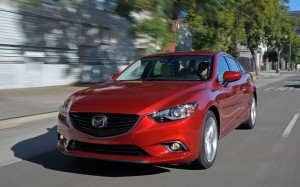 Good gas mileage is desirable, certainly. But it’s not everything. Maybe it is for the government control freaks who keep insisting on ratcheting it ever upward by legislative fiat – and to the exclusion of almost every other consideration. But consumers may have different needs and wants.

This is the crux of the dilemma.

However, is it quick enough? Relative to what the competition offers?

If the 6 still had its optional V-6 (or could be ordered with the pending but not-yet-here turbo-diesel four) the performance uptick achieved by the base four would be hailed as exemplary.

It is certainly no longer necessary to upgrade to get adequate performance – as it arguably was last model year. “Adequate” being defined as guts enough to achieve freeway-matching speed from merge ramps and so forth sufficiently quickly such that you don’t feel as though you’re driving an overloaded Geo Metro.

You will never feel this way driving the new four-cylinder 6.

Unless, of course, you square off against a V-6 Accord or Altima – or the turbo’d versions of the Fusion and Optima. 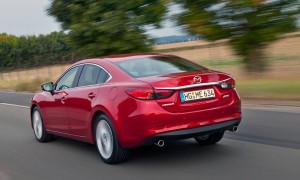 If the diesel SkyActiv engine gets the 6 to 60 in seven seconds or close to that – while delivering 40-plus MPG –  this rub will be salved.  Such performance – and economy – would be very appealing. So why – why – is Mazda sitting on the diesel? It’s a potential war-winner, right up there with the Germans’ WWII-era Arado AR234 jet bomber. Which the idiot Nazis could have mass produced as early as ’43 but which they didn’t get into front-line service until it was already far too late to do them much good.

The diesel dallying makes me angry, because the new 6 is a damn nice car – and deserves to go to the front lines with a full kit. 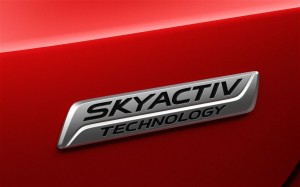 The ride/handling of this car is just excellent. Plush – and firm. It sounds like a contradiction in terms, I know. But go for a drive. You will find the suspension’s dampening ability phenomenal. Luxury – and sport – in the same car. If the road dips – or a pothole drops a wheel – the driver (and passengers) will hardly know it. Perhaps this is due to the new car’s longer wheelbase – now 11.4 inches vs. 109.8 for the old model. But Mazda deserves credit for doing more than just stretching the chassis. This car modulates itself to accommodate imperfections in the road with impressive subtlety. Yet it does not wallow. The steering isn’t sloppy. 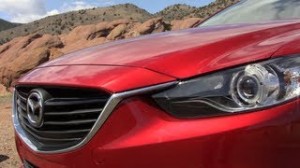 It reminded me of the way Pontiac, back in the day (’70s) set up the Trans-Am to ride well and handle well – vs. its sister car, the Camaro Z28, which also handled well but rode like a military half-track.

And, it’s really quiet. Especially the Sky-G engine. Which is amazing, given it’s a four.There are no sounds of strife, even at high RPM.

The only deficit is you can’t power out of the curves like you used to be able to – when the 6 could be had with 270-plus hp under its hood.

The front clip especially is lithe, sinuous – almost feline in the way it stretches forward over the arched wheelwells – with the arches rising like a an ocean swell from the front door area before they wash over the tires. The much-enlarged grille opening, meanwhile, suggests a lust for airflow – and a need for speed. 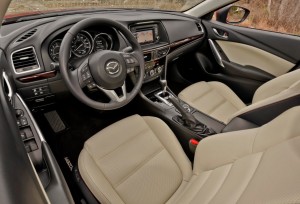 It’s a pretty car – a sexy car. No doubt about it.

And a lot more distinctive-looking than the previous 6 – which was more generic “Japanese sedan” than Mazda sedan.

Those are the subjectives. And the objectives?

This is an area where the Mazda absolutely mops the floor with the very appealing Kia Optima – which is otherwise one of the strongest contenders in this segment and arguably, the 6’s closest-in-spirit competition. It has only 34.7 inches of backseat legroom. That’s three full inches less – a big difference.  The Optima makes up for this with 45.5 inches of front seat legroom – which is more than any car in this segment by several inches, including the 6 (42.2 inches). But frankly, unless you’re an NBA forward, the Kia’s 45.5 inches up front is an on-paper advantage and more than you’ll ever need to be comfortably situated. I say this as a guy who’s six feet three  – which means I’m taller (and longer legged) than 95 percent of the population. If you’re my height or less, you’ll be fine with the 6’s 42.2 inches up front – and your passengers in the second row will be fine, too. 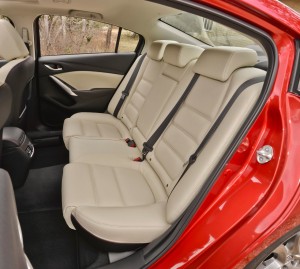 Meanwhile, if you buy the Kia, your backseat passengers will be miserable – unless they’re proportioned like Danny DeVito.

However, all is not sunshine and light. The subtraction of those 2.2 inches of overall length from the 6’s silhouette has had a more meaningful downsizing effect on trunk space – which drops to 14.8 cubes from the old 6’s much more generous 16.6 cubic foot trunk. The new 6’s trunk capacity is less than many of the other cars in this class, including the Fusion (16 cubic feet) the Optima and Camry (15.4 cubic feet each) as well as the VW Passat (15.9 cubic feet).

Though the base iSport trim is well-equipped (standard AC and major power options, 17-inch wheel/tire package, LCD driver  display, etc.) some stuff that probably ought to be included – like satellite radio/Bluetooth – isn’t. They’re extra-cost. Also, the base car with six-speed manual transmission comes with a smaller LCD display. If you order the optional six-speed automatic (which brings the MSRP up to $22,495)  then you get the larger (5.8 inch vs. 3.5 inch) display, Bluetooth/HD stereo and a rearview back-up camera. 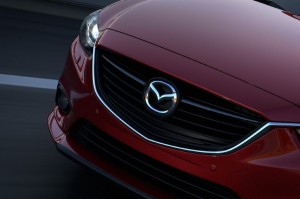 I just wish it were in the game – instead of waiting in the wings.

A Modern Take on ‘Planned Obsolescence’