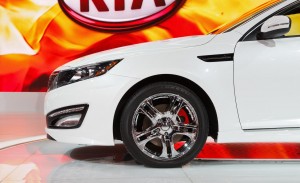 Kia Optimas are seemingly everywhere – like IROC-Z Camaros back in the ’80s – or more appropriately, Camrys in the ’90s.

People love this car – and more, they’re buying this car. Lots and lots of them. In the neighborhood of 15,000 a month now – on track for six-figures, annually. Kia is reporting monthly sales upticks in the 20 percent range – consistently. This is huge for a company that within recent memory was a bit player in the U.S. market.

The reason? It’s a damn fine car. And people have begun to notice.

Maybe you should, too.

The Optima is Kia’s take on the pocket battleship concept: It swims in the same waters as other mid-priced family-type sedans, but bristles with available features and equipment most of them lack, including a potent 274 hp turbocharged engine that’s more fuel-efficient than many of the competition’s much weaker “economy” engines. There’s also that slick-looking body, which can be made even slicker looking with the available full-length smoked black glass panorama sunroof. 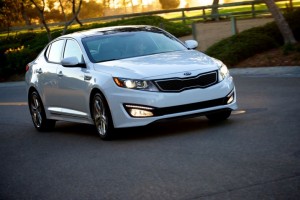 Prices for 2013 start at $21,200 for an Optima LX with the 200 hp 2.4 liter engine, six-speed stick and full power equipment (including standard six-speaker stereo with Sirius satellite).

There’s also a hybrid version of the Optima – base price $25,700 – which will be reviewed separately.

The Optima’s gun sights are trained on the flanks of segment leaders like the Toyota Camry, Mazda6 and the just-redesigned 2013 Ford Fusion. 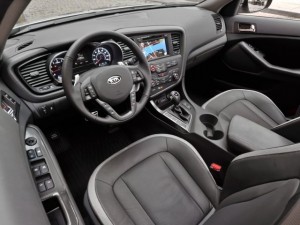 Mako shark – and more expensive than it looks – good looks.

Standard six-speed manual – in a sea of mostly automatic-only competition.

Lexus-level equipment at a much-less -than-Lexus – or BMW or Audi – price.

Headroom in both rows can be a bit tight for taller drivers, especially if you order the optional panorama sunroof. 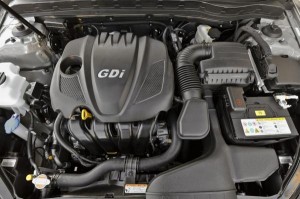 Like its corporate cousin the Hyundai  Sonata, the Optima comes with either a standard 2.4 liter four or – optionally – a turbocharged (and direct gas-injected) 2.0 liter four.

The standard 2.4 liter engine – also equipped with direct injection – is one of the strongest non-turbocharged four-cylinder engines currently on the market, producing a very impressive 200 hp while also delivering an even more impressive 35 MPG on the highway, 24 in city driving – mileage that’s about as as good as many economy cars with 50-75 less hp. For example, a Honda Civic sedan with a smaller 1.8 liter, 140 hp engine (60 hp less than the Kia’s engine) achieves 36 MPGs on the highway and 28 in city driving – a not-huge difference in fuel economy.

Also: The Kia’s 2.4 liter engine is available with a six-speed manual. The Fusion and Camry – and most of the others in this segment – come only with automatics. 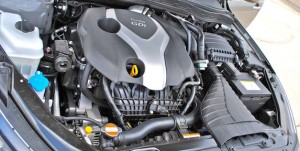 One notable exception is the Mazda6 – which like the Kia comes standard with a six-speed manual. But you only get 170 hp to play with – and though the Mazda can’t be faulted on fun-to-drive, its 21 city, 30 highway is several steps behind what the Optima achieves.

A possible wild card is the diesel version of the VW Passat. This car rates 31 city, 43 highway – and is available with a six-speed manual. But at $26,225 to start, it’s also about $5k more up front than the base price of the Optima LX.

Unfortunately, the Kia’s punchy little turbo engine is only sold with a six-speed automatic.

All Optimas are front-drive – as are most of the cars in this segment. 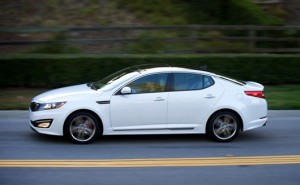 The regular Optima is among the more entertaining cars in this class to drive, if only because the driver has more hp at his disposal – and the option of changing gears for himself.

It is getting hard to find a mid-sized car in this price range that even offers a manual transmission. And the handful that do – like the VW Passat and the Mazda6, are either less powerful, more expensive, less fuel-efficient, not as spunky to look at – or not as spunky driving. Or some combination of those flaws.

The real treat, though, is the 2.0 liter turbocharged SX. This little engine is not merely powerful – it is torquey. How much torque? 269 lb.-ft. of it. How soon? Just 1,750 RPM – and maintained throughout the powerband. These are fantastic figures – especially for such a little – and economical – engine. Translated into everyday driving terms,  they mean no-lag, instant-on power whenever you need it. You get big-engine performance with small-engine efficiency, without the downsides of either. This is still a fairly rare thing. There are many high-efficiency little engines out there – but not many of them make big power. And there are still several large, high-power engines, too – but few of them can match (let alone beat) the Kia’s EPA numbers. 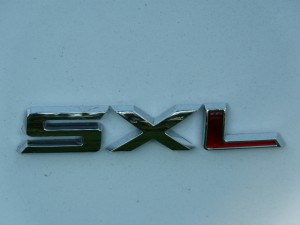 Other than the higher sticker, there’s no downside to upgrading.

I have just one complaint: This engine would be so much more fun with a six-speed stick. An available manual would also vitrify the Optima’s status a serious lux-sport sedan, too – and give BMW and Audi night sweats, probably.

But, you can’t have everything.

The Optima SX gives you almost everything – and that’s ok.

One of these things is turbo surge – without turbo lag.

It’s not a furious, tire-skittering rush like in a Mitsubishi EVO or MazdaSpeed3 – two comparably powerful (but smaller in size) turbo’d cars. But it is there. A slight whistle, too. The boost comes on strong just above 3,000 RPM – and there’s definitely enough on tap to scalp the pavement a little, if you really get on it. But no torque steer issues – surprising given this is FWD and not AWD car and all that power is hitting the pavement through the front wheels.

Other high-powered turbocharged cars like the Subaru WRX modulate the output through AWD. The MazdaSpeed 3 is the only other car on the market with similar power on tap that’s also FWD – and it has torque steer issues, fun as it is to drive.

On ride and handling: The SX I tested – with the 18-inch performance wheel/tire package – was definitely firmer-riding than a Camry or Passat, but not to the point of being bouncy, darty or  over-firm. The Camry and Passat are softies – too soft, in my opinion, for drivers interested in driving. Such people will find the Optima more engaging. Of the cars in this segment that I have tested, the Mazda6 is the only one that feels better sorted when you drive it like you just stole it. For example, it reaches the threshold of understeering later – at higher cornering speed – and it seems to like to be leaned on. The Optima’s still a step or two behind – if you’re really running.  But who does that stuff on public roads anymore? 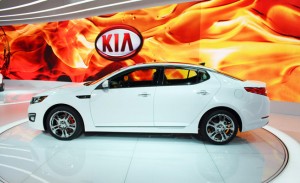 At 57.3 inches, the Optima sits about half an inch closer to the pavement than its Hyundai Sonata cousin. It’s also slightly longer, nose to tail (190.7 inches vs. 189.8). Longer and lower – plus some very crisply pleated sheetmetal (with BMW M-like fender vents), rakish front, rear and side glass plus an available oversized smoked black glass panorama sunroof – put distance, style-wise, between the Optima and its more formal-looking Hyundai relation.

Even though these two cars share the same basic platform and chassis, they are very different looking cars.

It’s like back in the 1970s when GM sold the Chevy Camaro and the Pontiac Firebird. Both cars shared the same platform, but their sheetmetal was unique to each car.

It’s a similar deal inside; you’d never know these cars – Optima and Sonata – sprang from the same source. The dash layout, the shape of the console, the controls – unique to each model. 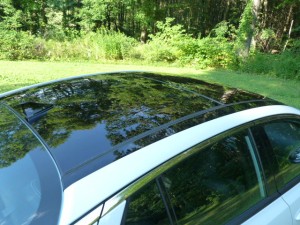 The Optima has a more Euro-look. It reminded me a lot of current Audis – especially the spread of the dash, with individually stitched sections and the center stack with its very Audi-ish buttons – while the Sonata’s cabin/dash layout is closer in theme to current Lexus and Infiniti designs.

Among the high-end (and Audi-like) equipment you can get in the Optima: Multi-stage seat heaters and coolers, with large, ergonomically designed buttons for these on the center console – and an available Technology Package that adds an upgraded eight speaker Infinity sound system bundled with GPS and LCD display and driver information system.

Order the Premium package and you’ll get a heated steering wheel, too.

There are a few potential downsides, though. 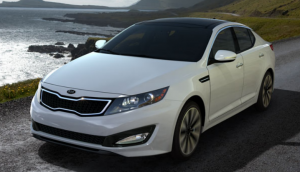 That slick-looking roofline cuts into the available headroom, especially with the optional dual-section panorama sunroof. Taller drivers may have to skip the sunroof to avoid their heads rubbing up against the headliner.

On the other hand, both the Kia and its Hyundai cousin have a lot more front seat legroom – 45.5 inches – than competitors like the 2013 Ford Fusion (44.3 inches) and Toyota Camry (41.6 inches) though backseat riders will pay a penalty for this.

There’s 34.6 inches of rear seat legroom in the Optima vs. 38.3 in the new Fusion and 38.9 in the Camry. But – try it – there’s still plenty of legroom in the rear seats for someone my size (6ft 3) to sit without assuming the fetal position or even having my knees rubbing up against the backs of the front seats. The only issue I had was with headroom. But if you’re less than six feet tall, it probably won’t be an issue for you. 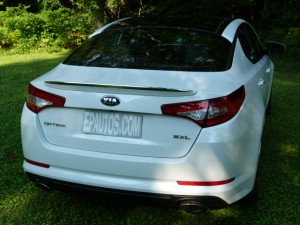 Though the Optima’s a looker – and a runner, with an excellent power-to-weight ratio – what’s most impressive about it is the car’s superior power-to-gas-mileage ratio. Both engines – but especially the optional turbocharged 2.0 liter engine. Mid-30s on the highway from an engine that produces 274 hp is exceptional; a have-your-cake-and-eat-it-too situation.

For a bit more perspective on this, consider the 2013 Ford Fusion – also a very nice car and a direct Optima competitor. The base engine in the Fusion is a 2.5 liter four that makes 170 hp – about 100 hp less than the Optima’s smaller 2.0 liter engine – yet the Ford’s 2.4 liter engine is actually less fuel efficient than the Kia’s optional – and much stronger – 2.0 liter engine.

Granted, you can get all-wheel-drive in the Fusion – a feature that’s not available in the Optima. But if you want very high power without very large gas bills, the Kia is hard to top. 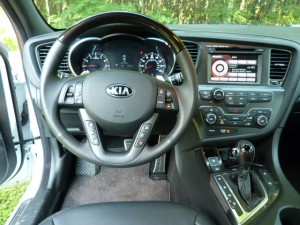 Same with the Japanese name brands (Honda and Toyota).

Five years after you’d be 100 percent on your own with those cars, Kia’s still got you covered on the biggies for another five years – twice as long.

Keep in mind that car companies don’t pull their warranty numbers out a hat. They’re based on pretty thorough internal research as to what is likely to fail – and when it is likely to fail. If it’s covered, it’s a good bet the part is probably not going to crap out on you during the warranty period.

This is one of the most appealing new cars on the market right now. Few – if any – real flaws. And lots to like.

Go and see for yourself.