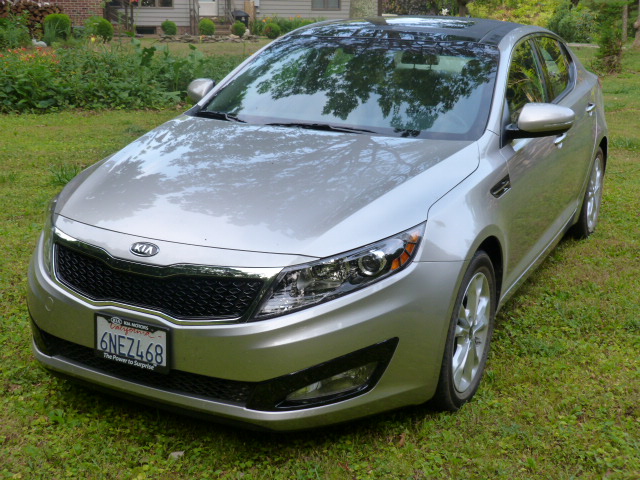 Everyone makes good cars now, so “reliability” and “safety” aren’t the selling points they used to be.

That puts the name-brand Japanese brands – Honda and Toyota – in a new and much tougher environment.

And it has given a leg up to ambitious Korean brands like Kia, which delivers the same level of reliability as Honda and Toyota, but wraps it up in a sexier, better-performing package that gives you better gas mileage – at a lower price. And with a much better warranty, too.

The Optima sedan, for example.

The Optima is a mid-sized front-wheel-drive sedan with near-luxury features and power that also delivers almost economy-car fuel efficiency.

It shares a basic underlying platform and engines with its corporate cousin, the Hyundai Sonata – but it has a completely different exterior and interior, a sportier personality – and a lower base price than its Hyundai sibling.

A hybrid version of the Optima has been added to the lineup, targeting the Ford Fusion hybrid. Prices weren’t available at the time of this review in mid-summer 2011, but the car should start around $28k. It will be arriving at dealer later this summer, or by early Fall.

Base 2.4 liter engine makes about 25 more hp than base engines in competitors like the Ford Fusion (175 hp) and Honda Accord (177 hp).

High-end equipment at a (much less) than Lexus – or BMW or Audi – price.

Headroom in both rows can be a close shave for taller drivers, if you order the optional sunroof.

Like its cousin the Hyundai the Sonata, the Optima comes with either a non-turbo 2.4 liter four or (optionally) a turbocharged 2.0 liter four.

The standard 2.4 liter engine – equipped with direct injection – is one of the strongest non-turbocharged four-cylinder engines currently on the market, producing a very impressive 200 hp (192 in California) while also delivering an even more impressive 35 MPGs on the highway, 24 in city driving – mileage that’s about as as good as many economy cars with 50-75 less hp. For example, a 2012 Honda Civic sedan with a smaller 1.8 liter engine that produces only 140 hp – 60 hp less than the Kia’s engine – achieves 36 MPGs on the highway and 28 in city driving, a not-huge difference in fuel economy.

The 2.4 liter engine is available with either a six-speed manual or – in higher trim versions – a six-speed automatic.

But gas mileage with the 2.0 turbo liter engine is still 34 highway (22 highway) which is better than most competitors’ comparably powerful – and much larger – V-6s.

Equipped with the 2.0 liter turbo engine, an Optima can shoot to 60 in 6.5 seconds – dead even with the V-6 Accord and quicker than the V-6 Fusion, which gets to 60 in about 7 seconds flat.

The soon-to-be-here Optima hybrid will improve the line’s already very solid fuel economy marks. In-city MPGs will likely be in the low-mid 40s, with highway mileage in the same ballpark as the non-hybrid Optima equipped with the 2.4 liter engine.

All Optimas are front wheel drive.

The turbo version has a noticeable turbo surge as the boost wicks up – something that other automakers have been trying (for reasons I can’t appreciate) to dial out of their turbocharged engines. It’s not a furious, tire-skittering rush like in a Mitsubishi EVO or MazdaSpeed3, but it is there. A slight whistle, too. The boost comes on strong just above 3,000 RPM – and there’s definitely enough on tap to scalp the pavement a little, if you really get on it. But no torque steer issues – surprising given this is FWD and not AWD car and all that power is hitting the pavement through the front wheels.

Other high-powered turbocharged cars like the Subaru WRX modulate the output through AWD. The MazdaSpeed 3 is the only other car on the market with similar power on tap that’s also FWD – and it has torque steer issues, fun as it is to drive.

The experience is civilized violence. The Optima will go when you punch it – but it’s not necessary to keep both hands tightly clenched on the wheel, ready to countersteer. This is in keeping with its grown-up demeanor. The Optima is more Audi-like than rowdy frat-boy hot rods like the WRX or MazdaSpeed3.

But just because it graduated, don’t think it can’t still party.

That includes the non-turbo version with the 2.4 liter engine. 200 hp (and a six-speed stick) is solid – especially for under $19k to start.

Handling/eagerness to corner is not as tight as its looks might lead you to expect – about a 7.5 on a scale of 10, with 10 being BMW (or Acura). It’s similar to something a little on the softer side, like the Lexus ES350. Nothing wrong with that, either. The ES350 is a monster seller, in part because it’s a nicer driver than the stiffer-riding (if better all-out-handling) BMWs and Audis out there.

The Optima emulates that kind of driving feel and ride quality – only it’s about $10k less and it gets better gas mileage, too.

At 57.3 inches, the Optima sits about half an inch closer to the pavement than its Hyundai Sonata cousin. It’s also slightly longer, nose to tail (190.7 inches vs. 189.8). Longer and lower – plus some very crisply pleated sheetmetal (with BMW M-like fender vents), rakish front, rear and side glass plus an available oversized smoked black glass panorama sunroof – put distance, style-wise, between the Optima and its more formal-looking Hyundai relation.

Even though these two cars share the same basic platform and chassis, they are very different looking cars.

It’s like back in the 1970s when GM sold the Chevy Camaro and the Pontiac Firebird. Both cars shared the same platform, but their sheetmetal was unique to each car, with the ‘Bird being slinkier looking than its Chevy stablemate.

It’s a similar deal inside; you’d never know these cars – Optima and Sonata – sprang from the same source. The dash layout, the shape of the console, the controls – unique to each model.

The Optima has a more Euro-look. It reminded me a lot of current Audis – especially the spread of the dash, with individually stitched sections and the center stack with its very Audi-ish buttons – while the Sonata’s cabin/dash layout is closer in theme to current Lexus and Infiniti designs.

Among the high-end (and Audi-like) equipment you can get in the Optima: Multi-stage seat heaters and coolers, with large, ergonomically designed buttons for these on the center console – and an available Technology Package that adds an upgraded eight speaker Infinity sound system bundled with GPS and LCD display and driver information system.

Order the Premium package and you’ll get a heated steering wheel, too.

There are a few potential downsides, though.

That slick-looking roofline cuts into the available headroom, especially with the optional dual-section panorama sunroof. Taller drivers may have to skip the sunroof to avoid their heads rubbing up against the headliner.

On the other hand, both the Kia and its Hyundai cousin have a lot more front seat legroom – 45.5 inches – than competitors like the Ford Fusion (42.3 inches) and Honda Accord 42.5 inches) though backseat riders will pay a penalty for this.

There’s 34.6 inches of rear seat legroom in the Optima vs. 37.1 in the Fusion and 37.2 in the Accord. But – try it – there’s still plenty of legroom in the rear seats for someone my size (6ft 3) to sit without assuming the fetal position or even having my knees rubbing up against the backs of the front seats. The only issue I had was with headroom. But if you’re less than six feet tall, it probably won’t be an issue for you.

Though the Optima’s a looker – and a runner – what’s most impressive about it is the car’s superior power-to-gas-mileage ratio. Both engines, but especially the optional turbocharged 2.0 liter engine. Mid-30s on the highway from an engine that produces 274 hp is a have-your-cake-and-eat-it-too situation.

For a bit more perspective on this, consider the Ford Fusion – also a very nice car and a direct Optima competitor. The base engine in the Fusion is a 2.5 liter four that makes 175 hp – about 100 hp less than the Optima’s smaller 2.0 liter engine – yet the Ford’s 2.4 liter engine is less fuel efficient than the Kia’s 2.0 liter engine, rating a so-so (in comparison) 32 highway. 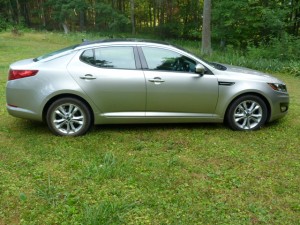 Granted, you can get all-wheel-drive in the Fusion – a feature that’s not available in the Optima. But if you want very high power without very large gas bills, the Kia is hard to top.

Same with the Japanese name brands (Honda and Toyota).

Five years after you’d be 100 percent on your own with those cars, Kia’s still got you covered on the biggies for another five years – twice as long.

Keep in mind that car companies don’t pull their warranty numbers out a hat. They’re based on very careful internal research as to what is likely to fail – and when it is likely to fail. If it’s covered, it’s a good bet the part is probably not going to crap out on you during the warranty period.

It’s not easy writing 1,500 words about a car that has almost no flaws without sounding like you got a check from the company that built it. But it’s a risk worth taking if I can get you to take a look at this one before you buy one of its competitors.

Go and see for yourself.