Honda’s Accord has long been the yin to the Toyota Camry’s yang. Sporty, modern-looking and high-tech – whereas the Camry has traditionally been flabbier-looking and stodgier-feeling. One was for younger up and comers; the other was the car of suburban middle class respectability. Together, they owned the mid-sized family sedan market, coming in as Number One and Number Two, respectively, in terms of total sales.

But now other models – including, significantly, American-made models like the Ford Focus and the soon-to-be-launched 2012 Chevy Malibu – are giving the Accord (and Camry) the first real sweat they’ve ever had.

Buyers now have good reason to look at the competition – domestic and otherwise – which is why Honda’s made several key updates and improvements to the Accord sedan for 2011.

Letting things ride on the strength of past glories isn’t enough anymore.

But are the changes made to the Accord for 2011 sufficient to hold the line?

The Accord is a mid-sized, mid-priced front-wheel-drive sedan that historically has offered a bit more sportiness with about the same reputation for long-haul quality and high resale values as the best-selling but less engaging to drive Toyota Camry. It faces its first real other-than-Toyota competition in the form of models like the 2011 Ford Fusion, Mazda6, Hyundai Sonata (http://ericpetersautos.com/?p=261
) and Suzuki Kizashi, among others.

The ’11 Accord is noticeably more fuel efficient (up to 34 MPG on the highway) as a result of aerodynamically-minded changes to exterior shape and gearing changes to the transmissions.

Significant fuel economy uptick over the 2010 model; four-cylinder LX’s 34 MPGs on the highway is among the best in this class.

As-expected high levels of fit, finish and attention to detail.

Gas mileage not as good as class-leading 35 MPGs on the highway Sonata – which also has a significantly more powerful standard engine.

Exterior styling is handsome – but bland.

Both engines are carryovers, basically the same as in the 2010 model Accord – but Honda has altered the gearing ratios in the transmissions to maximize fuel economy from these engines, which has improved across the board by about 1-3 MPGs relative to the 2010 Accord.

The four cylinder engine is available with a five-speed manual transmission or (optionally) a five-speed automatic, with or without steering wheel-mounted paddle shifters.

The V-6 comes only with a five-speed automatic (in the sedan).

Base models with the 177 hp engine need about 9 seconds to reach 60 mph; the 190 hp engine cuts about half a second off that time and the V-6 equipped Accord can get to 60 in about 7 seconds flat.

All Accords are front-wheel-drive only.

Excepting the base LX with the 177 hp engine, all versions of the ’11 Accord have good power and accelerate well. Although the new Kizashi – and even more so, the new Hyundai Sonata – come with stronger standard engines (185 hp and 198 hp, respectively) neither of these two otherwise outstanding new competitors offer an optional V-6.

Not yet, at least.

These are the upsides.

The downside is that the Accord’s powertrains – and its performance- no longer standout from the crowd. It’s par – which may not be enough to maintain the Accord’s historic position as a class leader. Anyone who cross-tests the new Sonata, for example, is going to come away impressed – with the Hyundai – and be hard-pressed to come up with a good reason to buy the Accord instead. Ditto the new Mazda6 or the Fusion. And then there’s Kizashi, which can be ordered with all-wheel-drive, too – a feature that’s not offered in Accord.

Handling is still excellent, in particular the direct, almost perfectly weighted steering feel – but here again, competitors have caught up and there’s just not that much difference anymore.

The Accord used to be a clear leader as far as handling/driving feel relative to the middle-aged spread Camry and the bouncy ride (and numb, over-boosted steering feel) of domestic-brand AARP Specials like the Chevy Malibu and Impala. Its VTEC engines were rightly loved for their rev-eager characteristics and turbine-like smoothness.

All that is still there.

Trouble – for Honda – is it’s also there in several other models now as well.

The Accord has grown in overall size during the past several model years so that’s its dimensions are now actually greater than the Camry’s – 194.1 inches long vs. 189.2 for the Toyota – but the Accord still seems proportionately tighter to the eye than the Camry. It also looks sleeker, as it always has – which up to now has been a major selling point over its chief Japanese-brand rival, which always had the ambiance of a more conservative (and older) person’s car.

But now, it’s the Accord that seems a bit conservative – at least when compared with the lipstick-slick new Sonata and the hunky Ford Fusion. The Sonata, especially, comes off as a much more expensive-looking car. When the delivery service dropped one off for me to test drive a few months ago, at first glance I thought it was a Genesis – Hyundai’s flagship luxury car – that had arrived in my driveway.

While the Accord looks nice, you will never mistake it for a $40,000 luxury car.

Also, the brilliant new Hyundai cleans the Accord’s clock as far as front-seat legroom, with an incredible, near limo-like 45.5 inches vs. the Accord’s 42.5 inches. But the Accord makes up some ground with a roomier backseat.

Camry smokes them both with 38.3 inches for backseat passengers.

The Kizashi is one of the few in this segment that comes in below the Accord in this category, with its Miata-like 13.3 cubic foot trunk

The Accord’s interior has more styling spark the exterior, in particular the shape of the center stack, which has some interesting angles to it. There’s nothing awkward or non-ergonomic about any of the controls – and some of them are very well-designed, including the large rotary knobs that control the audio system. Power points are conveniently located at the base of the center stack vs. some other cars where they are placed in hard-to-access areas such as inside the center console storage area.

The only functional defect I noticed in the Accord’s cabin was the next-to-useless emergency brake, which has so much slack built into it that it provides almost no help if you needed to slow the car rapidly with it. Reason? For (you knew it) safety reasons, Honda – like several other manufacturers – sets the tension on its emergency brake so loose that it is impossible to use the thing to lock up the back wheels – thereby making it impossible to perform a (socially unacceptable) parking brake bootleg turn. But it also means the emergency brake is nearly worthless in a real emergency – and probably barely adequate to hold the car securely on a steep incline.

One area where Honda could really boost the appeal of the Accord relative to the extremely potent competition it now faces would be to at least match the warranty coverage some of these competitors offer. The Accord’s standard three year/36,000 mile comprehensive warranty is thin gruel compared with the Sonata’s five year/60,000 mile basic warranty – and its ten year, 100,000 mile powertrain coverage.

Honda gives you just five years/60,000 miles on the Accord’s engine and transmission.

I’s true that the Accord’s warranty coverage is the same as the Fusion’s – and other cars in this segment like the Camry. But again, that’s just par.

And par is no longer enough to stand out.

People who have always liked – and trusted – the Accord – will probably continue to like and trust the ’11 model.

But Honda may find that on-the-fence buyers who cross shop the competition end up shopping elsewhere. 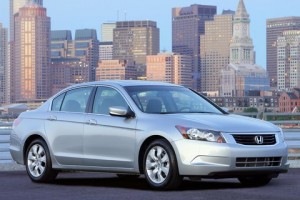