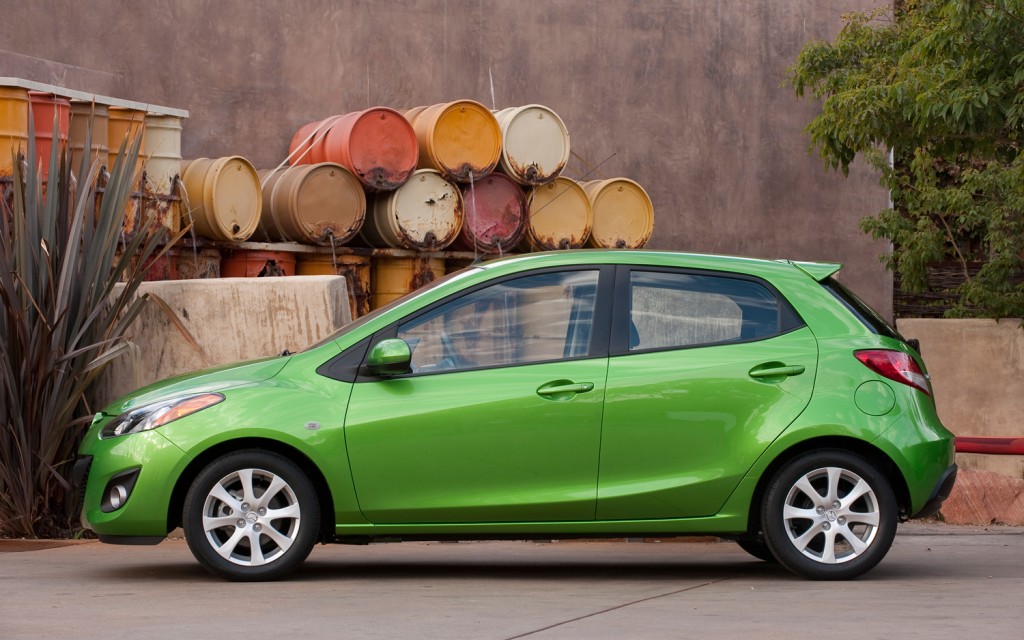 If you want a really small car – but still need four doors then you’ve pretty much got two choices: 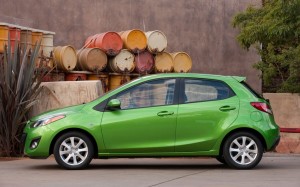 The Mazda2, subject of this review – or its chief rival, size and price-wise, the Toyota Yaris sedan.

Both stretch less than 13 feet bumper to bumper. That’s a small footprint. For some sense of scale, the Hyundai Accent and Chevy Sonic sedans are each more than a foot longer; the “compact” sized Toyota Corolla is more than two feet longer.

The 2 and Yaris each also have a starting price under $15k, making them among the most affordable new cars available – period. 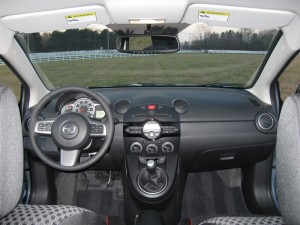 But, the 2 – being a Mazda – is without question the more fun to drive. Its handling and ride quality are both superior to the Yaris – unless you like lots of body roll. 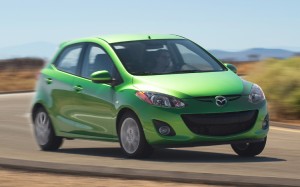 Also: Odds are good you’ll be able to haggle down the price of a new 2 to below sticker in anticipation of the next-generation 2 – which is due out sometime next year.

Anything else? Let’s take a look… . 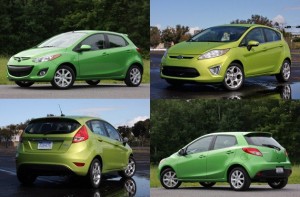 The 2 is Mazda’s entry-level subcompact – 18.2 inches shorter, overall, than the Ford Fiesta it shares a platform with.

Unlike its main same-sized rival, the Toyota Yaris, the Mazda2 is sold only as a hatchback sedan; no hatchback coupe version is available.

Base price is $14,720 for the Sport trim – $16,210 for the Touring, which adds leather trim, chrome exhaust tips, a decklid spoiler and other cosmetic upgrades. 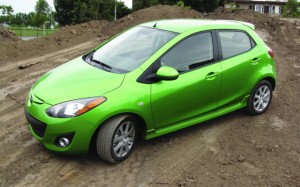 This will be the final year for the current generation Mazda2. A major update is on deck for next year that will likely include some form of the “Sky-Active” fuel-efficiency technology Mazda has been incorporating into the standard or optional drivetrains of models like the 3 and 6.

It’s almost a sure thing that, at the very least, the next 2 will get a more technologically up-to-date (and fuel efficient) six-speed automatic or CVT transmission.

More than one bodystyle maybe offered as well.

Fits places that would stymie almost anything else on four wheels – that also has four doors.

More back seat legroom than its bigger-on-the-outside Ford Fiesta cousin.

Gas mileage is substantially less than larger, more powerful Fiesta’s (40 on the highway).

Optional four-speed automatic is Betamax-era technology that hurts this car’s fuel economy potential – and its performance. 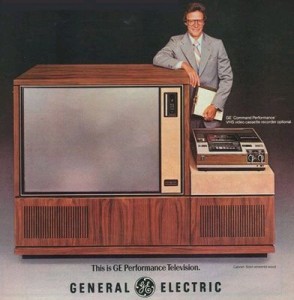 Although air conditioning is standard, to get cruise control you have to buy the more expensive Touring trim – which costs almost $1,500 more than the base Sport trim.

All 2s are propelled by a 100 hp, 1.5 liter four cylinder engine –  working through either a five-speed manual transmission or (optionally) a four-speed automatic.

Zero to 60 takes about 10-10.2 seconds, with manual equipped cars being noticeably quicker (and more responsive-feeling) due to the five-speed’s more advantageous gearing and because automatics just don’t work very well with small-displacement, low-torque engines  – the chief reason, after the need to eke out better MPGs, that most recent-vintage small-engined cars offer a continuously variable (CVT) automatic rather than a conventional automatic with a torque converter. Small engines – if they’re not turbo’d – tend not to have very much torque to convert. 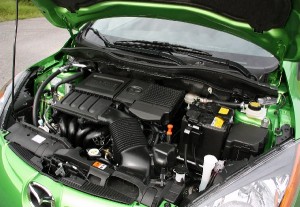 The manual version’s more efficient gearing also manifests in the fuel economy stats. A 2 with the five speed stick rates 29 city, 35 highway but the same car equipped with the four speed automatic comes in at 27 city/33 highway – a noticeable downtick.

In a number of current model year cars (including the 2’s cousin, the Ford Fiesta, which has a much more technologically up-to-date six-speed dual-clutch automatic transmission) the automatic-equipped version delivers better fuel economy than the manual-equipped version. In the Fiesta’s case, 30 city/40 highway vs. 29 city/38 highway). 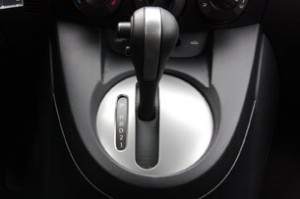 The ’80s-era four-speed automatic is the 2’s most obviously obsolescent point, functionally speaking.

The good news – for Mazda – is that the Yaris is similarly afflicted. The Toyota’s optional transmission is likewise a four-speed automatic . And, likewise, the Yaris’ mileage dips a bit when fitted with this transmission in place of its standard five-speed manual: 30 city, 36 highway vs 30 city, 37 highway.

Of course, the difference is less – and so not as noticeable. 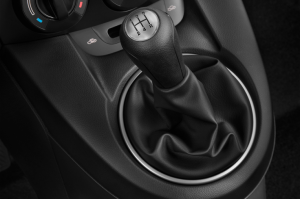 One thing that is noticeable, on the other hand, is the Yaris’ superior get up and go. A five-speed version can get to 60 in just over 9 seconds – significantly quicker than the 2, despite both cars having  identical engine displacement (1.5 liters) and the Toyota having only 6 more hp (106 vs. 100) . . . on paper, at least.

But, beware – Toyota buyers. The automatic Yaris is a slug. It’s at least a second slower to 60 – and thus, when so equipped, is slower than the 2. 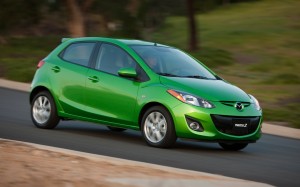 Because the 2 is so small and light, the engine has guts enough to pull 100-plus mph in fourth (with the five-speed manual) and to maintain 70-75 something in fifth with the engine turning around 3,000 RPMs (redline is 6,000). Put another way: 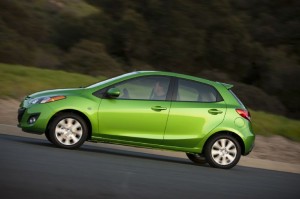 The 2 – like all modern econo-compacts – has sufficient power to keep up with the ebb and flow of modern traffic . . . provided the driver is willing to work the engine to get it. Don’t expect the car to respond much without giving it at least half to-three-quarters pedal to the floor when accelerating away from a stop  – and pedal firmly to the floor when you need to merge/pass. 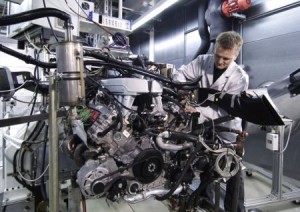 Mazda – like every car company – puts every engine through what most people would consider Medieval torture tests. Operating at or near redline for hours, for instance. That’s why the redline’s there, incidentally. To show you how fast you can safely spin the engine. So long as you don’t spin it faster, you’ll be fine. Especially if you only spin it fast for a few seconds at a time – unlike what they do to these poor engines on the test stand during durability trails. 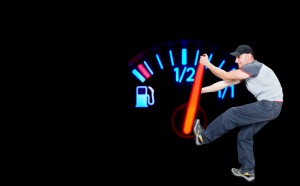 As mentioned earlier, the 2′s only real drivetrain deficit is its crickety four speed automatic. It’s as shocking to find one of these in a current-year car as it would be to find an ashtray built into the arm rest of an Airbus 380 seat. It’s an anachronism – and not just psychologically speaking. There is a reason why newer-than-2 cars (post 2010) almost all have at least six speeded automatics.

And that reason is fuel efficiency.

All else being equal, the 2 could probably hit 40 MPG if it had a modern automatic transmission.

Expect the next-gen 2 to have exactly such a box. 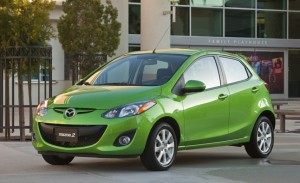 The best part of the 2 is inside – where you’re greeted by a very typically Mazda sharp-looking dash/console. The overall appearance is similar to what you’d find in the larger (pricier) 3 and even 6 – especially when trimmed out in the same handsome “piano black” and aluminum facings – and with the same cheery orange-red backlighting.

Once you close the door, you don’t feel like you’re in a low-bucks econo-box – as you do in the Yaris. 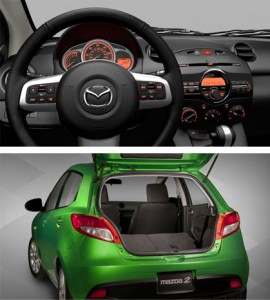 Design highlights include the 2′s shifter lever – which has been moved up off of the center console in between the seats and placed in a toggle-style position in a pod that grows out of the center stack. This frees up space on the floor console and eliminates the problem of drink spillage all over the shifter/trim plate.

It also puts the shifter itself closer to hand.

More covered storage space could be added, though. As it stands, all you’ve got is the (small) glovebox and the cargo area behind the rear seats – which of course you can’t reach while you’re driving. The center console itself just has cupholders and change cubbies; no covered (or deep) areas to stash items such as electronic devices you may want to hide from prying eyes. 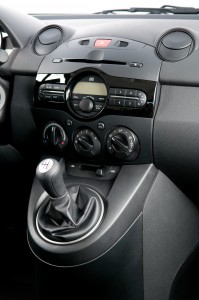 Like the Yaris, the 2 is a really small car – especially for a sedan. At least by the standards Americans are used to. In Europe, micro-cars are commonplace  – due to narrower roads and higher fuel prices. The 2’s doors seem almost wafer thin (though they seal tightly and road noise at highway speed is excellently muted) and the B pillar where the back door hinges attach looks like it wouldn’t help much in a T-bone wreck with a big pick-up or SUV.

And of course, it wouldn’t.

While the 2 gets high marks for crashworthiness, remember that these ratings compare a given car’s performance against others in its same size class. You can put 20 air bags into a micro-compact and it’s still not going to protect you as well in an accident as a larger, more physically substantial car with no air bags at all. No slam of the 2 as such; this fact o’ physics applies equally to other microscopic-in-size cars – like the Yaris, for instance.

Just a reality check – and something to keep in mind. 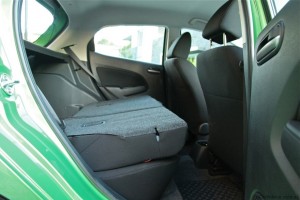 Backseat legroom is coach class, but viable: 33 inches. About the same as in the Yaris (33.8 inches) and – surprisingly – more than in the 2’s cousin, the physically larger Ford Fiesta, which only has 31.2 inches of second row legroom.

Shoppers will notice the 2 does not offer GPS as a factory (or dealer installed) option. This is not a bad thing, actually. Factory GPS units have a number of liabilities. One, they are expensive – typically adding $1,500-$2,000 to the price of the car vs. $500 or less for an aftermarket rig such as a Garmin or TomTom. 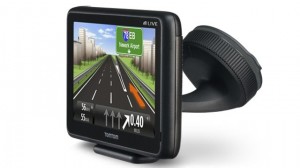 Two, the pace of technology improvements is so rapid that a factory-installed GPS unit may be as long-in-the-tooth as floppy discs in as little as two or three years. Aftermarket rigs are easier – and much less expensive – to upgrade.

Three (and unlike a Garmin or TomTom) you can’t take the in-dash  GPS unit with you – or out of the car and use it in another car.

So, if you want GPS, don’t sweat that it’s not factory available in the 2. Just go out and buy a TomTom or Garmin.

Base Sport models are well-equipped, with almost all of the essentials – including air conditioning, power windows and locks, plus a decent CD-playing stereo – included in the car’s base price. 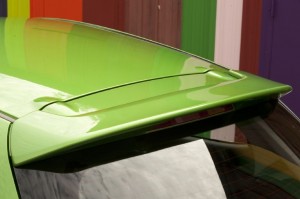 The one item missing from the menu of standard features is cruise control. To get that, you’ve got to step up to the more expensive Touring model – which includes a lot of stuff you may not especially want, such a a decklid spoiler, chrome exhaust tip and leather trim.

I think Mazda ought to let you buy cruise control as a stand-alone option instead of trying to up-sell you into the more expensive Touring trim. 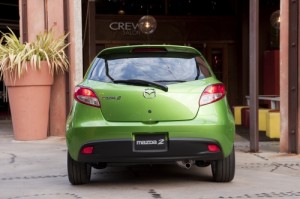 If you’re a stick driver – and want a car that’s more fun to drive – the current 2 is still a better choice than the Yaris. But if you must have an automatic, you might want to wait a few months to see what the next-Gen. 2 has to offer.

Just be prepared to spend more to get it.