As a gauge of how much has changed in the car market in just the space of two or three years, consider the following: 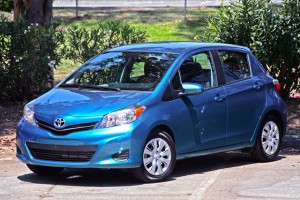 To the Hyundai-Kia combine, as well as (yep) Ford and even (gasp!) GM. They all build good small cars now – arguably, among the best small cars you can buy.

Which is why Toyota’s small cars urgently needed a makeover. The Yaris is the first to get it – and it makes a world of difference.

Because the Yaris is back in the game, at least.

Last year, it wasn’t even in the bleachers.

The Yaris is Toyota’s entry-level compact economy car. It comes in two-door or four-door hatchback bodystyles, with prices starting at $14,115 for the base L three-door and topping out at $16,400 for an SE sedan. A hybrid version will be arriving in a few months, too.

The Yaris battles for the same customers shopping the Hyundai Accent (and its sportier cousin, the Kia Rio), Ford’s Fiesta (and its slightly smaller cousin, the Mazda2) among the segment standouts.

The Yaris gets a major makeover for 2012.

Light-years better than before. No more lemon-sucking face. 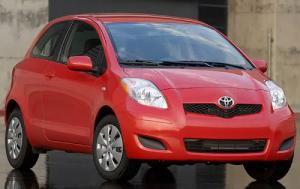 Coupe or sedan bodystyles – both with hatchbacks.

Mileage (30 city, 38 highway) up to current snuff – with the standard manual transmission.

Same powertrain as before. Five speed manual in a world of six-speeds.

A four-speed automatic in 2012? Order this box and lose 3 MPG on the highway. 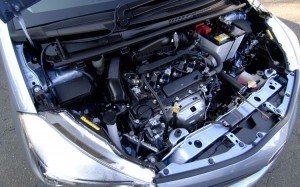 The new Yaris comes with the same drivetrain as the old Yaris: a 1.5 liter, 106 hp engine driving the front wheels through either a five-speed manual (standard) or a four-speed automatic (optional).

Toyota could have done better – and probably should have.

The ’12 Hyundai Accent costs a couple grand less to start and comes standard with a direct-injected 1.6 liter engine that makes 138 hp. You also get a six-speed manual standard – with a six-speed automatic available optionally.

The ’12 Ford Fiesta also has a1.6 liter engine; it makes 120 hp – and you can team it up with either a five-speed manual or a dual-clutch automated manual six-speed (impressive equipment for a car in this price range).

The Yaris still does ok when it comes to gas mileage – but only if you stick with the five-speed stick. Then you get 30 city, 38 highway – a virtual dead heat with the Fiesta’s 29 city, 38 highway and the Hyundai’s 30 city, 40 highway. But if you choose the Toyota’s Clinton-era technology four-speed automatic, the Yaris’ mileage drops to 35 on the highway – 3 MPG lower than the five-speed manual equipped Yaris and 5 MPG lower than the Accent with either its standard six-speed manual or its optional six-speed automatic.

The automatic Ford beats the manual Yaris – 39 MPG on the highway.

Another area where both of these competitors trump the Toyota is performance. The manual Yaris is adequate: Zero to 60 in about 9.4 seconds, which is as good or better than the manual-equipped versions of the competition. But the automatic Yaris is one of the slowest new cars on the road: Zero to 60 in about 11 seconds. The automatic versions of the competition are a full second or two quicker, because their six speed transmissions have more favorable gearing than the Toyota’s four-speed. 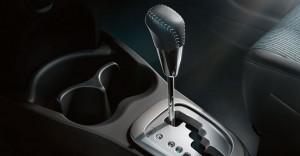 What’s sad is the missed opportunity. Even with its less-than-state-of-the-art five-speed manual, the ’12 Yaris almost matches the current class leaders, MPG-wise.

Had Toyota fitted the new Yaris with six-speeds – manual and automatic – it probably would have beaten the current class leaders – achieving 40 MPG or better on the highway, which would have made it a best-in-class – instead of still playing catch-up.

The carrying-over of the four-speed automatic is likely to turn into a big liability for Toyota if gas prices sail to $4 or even $5 per gallon. Buyers who need an automatic-equipped car are going to see that they can get 4-5 MPG better in a Hyundai or a Ford for about the same or even less money. 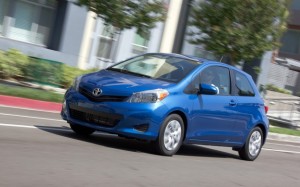 I tested a new Yaris with the five-speed manual transmission. It accelerates about as quickly as the other cars in this class – which isn’t quick but is adequate. Ten seconds or less to 60 is the standard. If a car can pull that off, it’s got enough guts to deal with today’s traffic – to merge efficiently from a side street, to pull itself even with highway traffic from a merge lane without sounding and feeling like it might spit its pistons through the oil pan at any moment.  The Yaris is as good as the others when it comes to that. The chief difference you’ll notice between it and the segment-leading Accent is the RPMs – engine speed. Because the Hyundai has six speeds, its legs feel longer. In fifth, the Yaris is already in top gear but in the Accent, you’ve got one more to go. It pulls lower RPMs in sixth at 50 than the Yaris does in fifth at the same speed. This is also why the Hyundai hits 40 MPG – despite having a larger and significantly more powerful engine.

Ditto the Ford, though to a lesser extent.

I’ve already told you about the automatic Yaris. I didn’t get to drive a ’12 with this transmission, but I have driven the previous generation Yaris with this transmission – and it’s the same transmission (with the same engine) so I feel safe in reporting to you – warning you – that it is over the 10 second bar. And then some. With a passenger, it’ll probably take an automatic-equipped Yaris 11 seconds or longer to get to 60, pedal to the floor, all out. Though not crippled by historic standards (an Old Beetle needed about 20 seconds to get to 60) by current standards, it’s about 3 full seconds slower than average. That doesn’t sound like much when you think about in in your mind, but out on the road, it means forget about pulling into traffic until there’s no other traffic coming. Though ok as an in-city commuter, the automatic Yaris is out of its league on the highway – in particular, trying to merge onto highways.

Handling: I test drive new cars every week and to a great extent they are same-same until you really get going. They’re generally firm-sporty riding and can be taken up to a fairly high threshold of speed (usually, well above legal speeds) before you begin to notice their handling differences. Not the Yaris. At least, not the Yaris I tested. It was surprisingly soft-riding, which I liked. Not bouncy, just… soft. It felt like a larger car, very smooth – easy on the back. 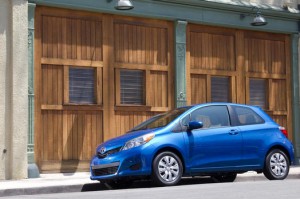 But, there’s a flip side – body roll. If you run the Yaris at a fast pace – say 10 over the limit on a curvy road with dips and bends – you’ll notice this immediately. The body leans and pitches; push it some more and the stability control system will chime in to say ease off, man. As an economy-minded car (vs. a performance-minded car) this is probably of zero relevance to the typical buyer prospect. If anything, the softer handling and ride will be a plus. 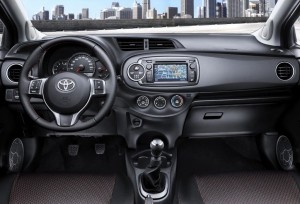 Skin-wise, there’s no doubt the ’12 Yaris is an improvement over the old Yaris. A huge improvement. The old Yaris was one of the last economy cars that still looked like an economy car – cringing posture, lemon-sucking face, downmarket interior with that swivel left (for the U.S. market) or swivel right (for the Euro-export market) central mount IP – etc.

This could not stand in a market flush with cars like the new Accent and Fiesta – which look like real cars, cars that people might want to buy rather than buy because that’s all they can afford.

The updated Yaris has a nice widetrack squat (this probably ties into the soft, smooth, bigger car ride) and a not-ashamed-of-itself front end, with a deep set, squared-off chin and similarly themed wide skirt rear end.

Same on the inside – only more so. The dash layout is complex, with different geometric shapes and angles, fused into a single whole. The dash is now where it should be – ahead of the steering wheel, in front of the driver – not up on top of the dash, canted toward the driver. Functionally, it’s well-conceived and executed – including the three large rotary knobs for the AC/heat/fan control and the change tray mounted just above the glovebox on the passenger’s side. 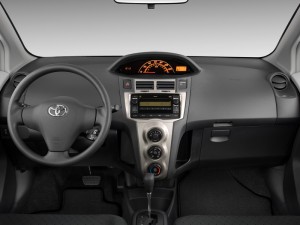 Space-wise, too – it’s all good. Just not quite as good as the new segment leaders. I’m six feet three and over 200 pounds and I had plenty of head and legroom in the driver’s seat and adequate room in the back seat (my knees didn’t hit the front seat backs and my head wasn’t rubbing up against the roof).

However, you get an inch or so more front seat legroom in the Fiesta and the Accent.

Rearseat-wise, they’re all a little cramped – but usable. 33.3 inches of legroom for the Toyota vs. 31.2 for the Ford and 33.3 for the Hyundai. Rear headroom’s also a dead heat: 37.6 for the Yaris vs. 37.1 for the Fiesta and 37.2 for the Accent. Two normal-sized adults can ride in back for short-medium trips without violating the Geneva Conventions.

The hatchback layout (both versions of the Yaris) gives you a decent amount of storage space given the size of the car itself: 15.3-15.6 cubic feet (depending on which version you get). For some perspective on this, I recently reviewed the Hyundai Genesis – a mid-sized luxury sedan – and compared it with other mid-sized luxury sedans, such as the BMW 5 and the Mercedes E. None have larger trunks than the Yaris – and the BMW has a smaller trunk (14 cubic feet). There’s one other thing Toyota should have done but didn’t that would have made the ’12 Yaris the equal of competitors like the Accent: Match the Hyundai’s class-best warranty coverage. Instead, you get the same three year /36,000 mile basic warranty that Toyota provided with the ’11 Yaris – vs. five years/60,000 for the Accent. Hyundai also backs the Accent’s powertrain for ten years and 100,000 miles. With the Yaris, you’re on your own after five years and 60,000 miles.

The new Yaris is much better than the previous Yaris – but unfortunately, that’s not the standard that matters. Though it’s no longer an also-ran, it’s not quite as good as the best that’s out there – models like the 2012 Hyundai Accent and the 2012 Ford Fiesta.

A six-speed gearbox (and a better warranty package) would fix that. Here’s to hoping Toyota gets it done – the sooner the better.