Hyper-small cars are making a comeback in the United States.

How small? Check out the new Mazda2. It is 18 inches shorter, nose to tail, than the “compact” sized 2011 Ford Fiesta (with which it shares common architecture).

That makes it one of the smallest, lightest sedans on the road.

But unlike the Yaris – which ought to have a “kick me” sign taped to its bumper – the 2 is not a morose and desperate-looking transportation appliance whose main virtue is its budget-friendly price tag.

It does have a few flaws, but overall, the 2 is the kind of small, inexpensive car you can definitely learn to like.

The 2 is Mazda’s newest model and an ultra-compact; it is considerably smaller than most current compact-sized economy sedans, including its corporate cousin, the Ford Fiesta.

Prices start at $13,980 for the base Sport model with five-speed manual transmission and top out at $16,235 for a Touring model with four speed automatic.

Large (for a tiny car) trunk.

Not as substantial feeling (or looking) as something like the ’11 Fiesta.

While AC’s standard, to get cruise you have to buy the more expensive Touring model.

The front-wheel-drive 2 is powered by a 100 hp, 1.5 liter four cylinder engine, working through either a five-speed manual transmission or (optionally) a four-speed automatic.

Zero to 60 takes about 10-10.2 seconds, with manual equipped cars being noticeably quicker (and more responsive-feeling) due to more advantageous gearing.

The manual version’s more efficient gearing also manifests in the fuel economy stats. A 2 with the five speed stick rates a so-so 29 city, 35 highway but the same car equipped with the four speed automatic comes in at just 27 city/33 highway – a significant downtick.

In a number of ’11 model year cars (like the new Ford Fiesta, which has a much more technologically up-to-date six-speed dual-clutch automatic transmission) the automatic-equipped version delivers better fuel economy than the manual-equipped version (in the Fiesta’s case, 30 city/40 highway vs. 29 city/38 highway).

100 hp doesn’t sound like much (and it isn’t much; my 1200 cc motorycle’s engine is almost as big as the 2’s 1.5 liter engine – and it produces much more horsepower) but because the 2 is so small and light, the car has guts enough to pull 100-plus mph in fourth (with the five-speed manual) and cruise comfortably at 70-something in fifth with the engine turning around 3,000 RPMs (redline is 6,000).

The important thing to know is that the 2 – like all modern econo-compacts – has enough power/performance to keep up with the ebb and flow of modern traffic. It’s not like it was back in the days of the (old) Beetle, Chevette, Geo Metro and such like – when it could literally be dangerous (and was always scary) trying to merge onto a highway or pull into a busy intersection in a car that needed 15-30 seconds to reach 60 mph.

As mentioned earlier, the 2’s only real drivetrain deficit is the optional four speed automatic. Virtually ever other 2011 model year car (including low-cost economy compacts) offers at least a five speed automatic – and several (like the ’11 Fiesta) offer six speed automatics, which explains their better fuel economy and also accounts for the snappier acceleration/driving feel of the automatic-equipped versions of those cars.

It is particularly surprising that Mazda – a brand which prides itself on the sportiness of its cars – would saddle the otherwise commendable 2 with such an obsolete (and inefficient) transmission.

The best part of the 2 is inside, where you’re greeted by a very typically Mazda sharp-looking dash/console, with an appearance very much like you’d find in the larger (pricier) 3 and even 6 – trimmed out in the same handsome “piano black” and aluminum facings, with the same cheery orange-red backlighting.

Once you close the door, you don’t feel like you’re in a low-bucks econo-box, as you do in cars like the Yaris (and the Hyundai Accent).

As is becoming a design trend, the 2’s shifter lever has been moved up off of the console floor and placed in a toggle-style position in a pod that grows out of the center stack. This is a smart – and ergonomic – changeover. The positioning frees up space on the floor console and eliminates the problem of drink spillage all over the shifter/trim plate.

It also puts the shifter itself closer to hand.

More covered storage space could be added, though. As it stands, all you’ve got is the (small) glovebox and the cargo area behind the rear seats – which of course you can’t reach while you’re driving. The center console itself just has cupholders and change cubbies; no covered (or deep) areas to stash items such as electronic devices you may want to hide from prying eyes.

Like the Yaris, the 2 is a really small car – especially for a sedan. At least by the standards Americans are used to. In Europe, micro-cars are commonplace (due to crowding and gas prices three times as high as ours). The doors seem almost wafer thin (though they seal tightly and road noise at highway speed is excellently muted) and the B pillar where the back door hinges attach looks like it wouldn’t help much in a T-bone wreck with a big pick-up or SUV.

While the 2 gets high marks for crashworthiness, remember that these ratings compare a given car’s performance against others in its same size class. You can put 20 air bags into a micro-compact and it’s still not going to protect you as well in an accident as a larger car with no air bags at all. No slam of the 2 as such; this is equally true of other small cars like it, such as the Yaris.

Just a reality check – and something to keep in mind.

There is a lot of legroom in the back (34.8 inches) which (surprisingly) is several inches more backseat legroom than you get in the 2’s larger corporate cousin, the Ford Fiesta (31.2 inches).

It’s also more legroom than in the Yaris sedan (33.8 inches).

Honda’s Fit has more room than all these cars but it is a more expensive car (base price close to $15k) and so the comparison’s not really fair.

Shoppers will notice the 2 does not offer GPS as a factory (or dealer installed) option. This is reasonable policy. Factory GPS units have multiple liabilities. One, they are very expensive – typically adding $1,500-$2,000 to the price of the car. Two, the pace of technology improvements is so rapid that a new factory-installed GPS unit may be as long-in-the-tooth as floppy discs in as little as two or three years. Three, you can’t take the in-dash factory unit with you – or out of the car and use it in another car.

This is why factory-installed GPS is going the way of the 8-track player.

Instead, a number of new cars offer aftermarket units such as Garmin, which cost a third of what a factory in-dash unit costs, can be taken with you (or used in another car) and can be economically replaced with a newer, more up-to-date model when technology advances.

Mazda hints that a Garmin unit will be offered sometime later in the 2011 model year.

Base Sport models are well-equipped with almost all of the essentials – air conditioning and most of the basic power equipment (windows and locks; a decent CD-playing stereo) – included in the car’s base price.

The one item missing from the menu of standard features is cruise control.

A higher-priced Touring trim is available that upgrades you to 15 inch alloy wheels, steering wheel-mounted secondary controls for the stereo, leather interior trim and sporty red piping for the seats. You also get foglights in the front end and a little wingspoiler mounted on the back of the hatch – plus cruise control.

Basically, if you want cruise, you’re forced to step up to the higher-priced Touring model. That’ a mean little trick in my book. Cruise ought at least to be offered as an a la carte option on the base Sport version.

Despite a few small flaws, the 2 is a helluva lot more appealing than the wretched little Yaris – and it’s a better city car/commuter than the larger Fiesta.

It deserves a modern five speed (or better yet, six speed)  automatic transmission – and cruise control shouldn’t be something you have to buy all the wings and foglights and other superfluities that come with the Touring version.

But these defects can be easily and quickly fixed. Ugly (and sad-looking, like the Yaris) can’t be – short of a total redesign. 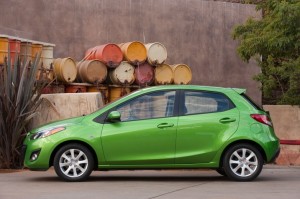 One of Clover’s Blue Suited Heroes….