Life is often about compromises – and so is the new CR-Z coupe from Honda.

But to deliver all that driving goodness and hipster style, it sacrifices much in the way of everyday functionality. And perhaps more seriously, it gets not-so-great gas mileage – for a hybrid.

I say perhaps because to a great extent hybrids are as much about image as they are about economy. The truth is that many people buy hybrids to make a statement as much as they do to save gas. Doubt it? Then recall how well the obviously hybrid Prius has sold vs. the torpid sales of the not-so-obviously hybrid Honda Civic (and Accord hybrid) sedans.

Some people want to look green at least as much as they want to save green.

So the CR-Z may prove very popular – even if it’s not especially fuel-efficient.

The CR-Z is a compact two-seater “mild” hybrid coupe with a small gas engine supplemented by a small electric motor and battery pack.

It’s the first two-seater hybrid since the late 1990s-era Honda Insight coupe, but unlike the original Insight (which was capable of more than 60 mpg) the CR-Z’s gas mileage is about the same as most conventional (non-hybrid) subcompacts – some of which (like the new Ford Fiesta) actually get better gas mileage.

Prices start at $19,200 for the base model and top out at $23,210 for a loaded EX with GPS navigation and CVT automatic transmission.

The CR-Z is a brand-new model for Honda, although the car shares many of its components with the current Insight hybrid sedan.

The first hybrid that’s not all about fuel economy.

Available six-speed manual transmission – a feature no hybrid to date has ever offered.

37 MPG (highway, with the manual) isn’t much to write home about; several current econo-compacts (such as the Mini Cooper) accelerate and handle as well or better and can match (or nearly match) the CR-Z’s fuel economy without the complexity or cost of hybrid technology.

The CR-Z is powered by a 1.5 liter gas engine boosted (on demand) by a small electric motor and battery pack, for a total rated output of 122 hp.

A six-speed manual (with Hill Star Assist) is the standard transmission, with a Continuously Variable (CVT) automatic transmission with Sport, Normal and Economy modes the optional unit.

Fuel efficiency is good but not great. With the standard six-speed manual, EPA quotes figures of 31 city/37 highway; with the more efficient CVT automatic, the highway figure improves to 39 MPGs. Several new econo-compacts such as the 2011 Ford Fiesta actually get better gas mileage (41 MPGs) and the very sporty and uber-cute BMW Mini Cooper (37 MPGs) virtually matches the CR-Z’s fuel economy while costing less to buy ($18,950 to start) and probably less to own down the road (no complicated and potentially expensive to fix/replace hybrid components).

Granted, a nine-ish 0-60 time isn’t exactly Mustang GT territory, but check the stats and you’ll discover it’s not far off the pace of the base model Mini Cooper (about 8.5 seconds) and a major improvement over the diesel Chevette-slow Prius (11-plus endless seconds). It feels punchy, too, because peak torque is available at a very low 1,000 RPM – which is better than even a diesel engine as far as that goes.

The CR-Z also sounds good when you accelerate and that’s a quality no hybrid I have ever driven could claim. The exhaust note under 3/4-full throttle is very much like a Civic Si’s. And the optional CVT transmission’s three push-button settings dramatically alter the personality of the drivetrain. Engage Sport and throttle tip-in becomes immediately sharper; the engine noticeably more racy and eager-feeling. The transmission gears down, too – literally making the most of the available power. In Normal, the transmission’s behavior softens up a little and so does the aggressiveness of the throttle; but it’s still got more verve than any other current hybrid. To max out the fuel efficiency potential, depress the third button – which has a green leaf icon (which also appears on the dash display). Now the CR-Z feels like a hybrid – but for slow-poking around town or being stuck in traffic, it’s the ticket.

Mostly the CR-Z runs on gas, but the IC engine will automatically turn itself off when you’re stopped at a traffic light, then cut back on again, automatically, when it’s time to drive off. The electric motor/battery pack also provide some extra power for acceleration and passing, but the CR-Z doesn’t actually move on electric power alone, as in the Prius and some other hybrids.

Some reviews have criticized the CR-Z for having excessive body roll when cornering. I drive pretty aggressively (let’s be honest; I drive very aggressively) and I didn’t notice any such – until I was literally pushing the envelope of sanity (not to mention legality). Sure, on a road race track, the CR-Z isn’t going to keep up with Miata – or even a Civic Si. Does that matter? Honda’s intent was simply to inject enough personality into a hybrid to make it somewhat fun to drive. And the CR-Z absolutely is fun to drive – and more than just “somewhat,” too. Hard-core weekend racer types don’t buy hybrids anyhow. The target audience is someone who wants something that won’t put them to sleep.

Not scare them – or get them thrown in jail for reckless driving.

If you remember the ’80s-era CRX coupe, you’ll see hints of it in the CR-Z. It’s a stubby, dart-like little thing with a glass-topped tapered rear hatch. Aerodynamic efficiency (and so, fuel efficiency) is enhanced by a molded-in lower body kit/skirt – though unlike the ’90s-era Insight coupe, the CR-Z rides on performance-minded 16-inch wheels and tires (with 17-inch wheels optional) instead of super-skinny low rolling resistance tires.

The interior is even more aggressively futuristic than the exterior, with lots of swoopy angles and jet fighter-like displays. The main gauge is a jewel-like speedometer with three-color backlighting: It glows red when you’re operating in Sport mode, blue for Normal and Green for, well, green (hybrid/economy mode).

You sit low in the sport buckets and visibility for shorter drivers (and passengers) may be a issue; there’s also a fairly large blind spot caused by the steeply up-angled cat’s-eye rear quarter glass and the fastback bodywork – but the back-up camera and the car’s abbreviated dimensions (just 13 feet, end to end) make it very easy to maneuver in tight quarters.

The two-seater layout forces comparisons with other two-seaters, none of which (such as the Mazda Miata or BMW Z4 or Porsche Boxster) are hybrids or intended to be particularly economical – or even remotely “green.”

The ’90s-era Insight was also a two-seater, but it was capable of motorcycle-like fuel economy (some people got 70 MPGs out of them) and never intended intended to be particularly sporty.

So the CR-Z is somewhere in between – a compromise.

Evidence of this can be found behind the front seats, where you’ll discover what appear to be vestigial rear seats: A pair of molded-in-plastic cutouts that look like they’d accommodate a small person’s butt – along with a fold-down “seatback” that’s actually the floor of the cargo area. There’s zero legroom and no seat belts – as well as no way to get a person back there without literally crawling in from behind – but they sure look like almost-seats.

Though not usable for people, the end result is a decent amount of storage space – just over 25 cubic feet – for what’s otherwise a very small car. That’s more than twice as much as the “trunk” space you typically get in a conventional two-seater, such as the Mazda Miata or BMW Z4 – and it does add a dose of practicality to the CR-Z’s persona.

A young/single person could use this as their everyday driver with more ease than the typical two-seater and its glovebox-like “trunk.”

Though economy is a big part of the CR-Z’s mission it’s not a stripped-down basic car with only a few amenities. Automatic climate control AC, power windows, locks, cruise control and a nice stereo with steering wheel-mounted secondary controls are among the standard features. Many luxury-level features are available, too – including leather/metallic interior trim and a high-end audio system with Bluetooth wireless. The major stand-alone feature is GPS, which works through a large LCD display mounted at the top of the center console and canted toward the driver.

All the latest active/passive safety equipment – side-impactand curtain air bags, ABS, traction and stability control – is included in the cars base price.

The CR-Z also comes with a longer, hybrid-specific eight-year/80,000 mile warranty on the electric motor, battery pack and related hybrid system components. The rest of the car is covered by a shorter-lived three-yar/36,000 mile basic (and five-year/60,000 mile drivetrain) warranty.

There are equally (or even more) fuel-efficient and as (or more) fun-to-drive non-hybrid little cars out there – notably the spunky and 37 MPG Mini Cooper – but the CR-Z has the extra appeal of hybrid cachet desired by many people as much  – or even more – than either fuel-economy or sportiness. 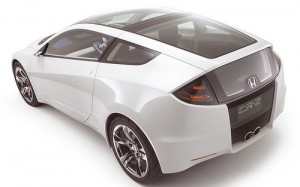