Let’s say you prefer (for whatever reason) not to “buckle up” when you drive.

Yes, I know that seat belts save lives – and that your chances of being injured or even killed in the event you have an accident go up if you are not wearing a seat belt. Well, fine.

It’s also true that eating right and exercising regularly saves lives – and I’m guessing you’d prefer to decide for yourself what to eat and whether you’ll hit the gym today.

Yet we tolerate all this “Click it or Ticket” crap.

Many states have laws on the books not only requiring that you wear your seatbelt but also, increasingly, empowering police to pull you over for this omission. It’s become yet another pretext for being hassled by the Polizei.

Since it’s probably a losing battle to fight this creeping nannyism head on – after all, what about the children? –  one must adopt guerilla tactics of evasion and obfuscation to assert one’s right to make decisions about personal matters for oneself.

Most states that have mandatory seatbelt laws also have exemptions to those laws for medical reasons. Some people, for (cough, ahem!) physical or other reasons, cannot use seat belts – and thus, are eligible for an exemption based on medical necessity. For instance, neuropathy and orthopedic problems.

That’s where Dr. Buckle Off! comes in (see www.buckleoff.com).

What happens is this: You fill out an online medical history/questionnaire and submit it for consideration by Dr. Bob – a licensed, board certified physician. If the good doctor determines that your need to drive unbuckled is medically necessary, he will issue you a certificate that so states – and which is “legal tender” in all states that have mandatory buckle-up laws. Keep the laminated certificate in the glovebox; if Johnny Law pulls you over for a seatbelt ticket, show it to him. That ought to be sufficient to end the transaction on the spot – but if the cop persists and issues you a ticket anyhow, go to court and  show the judge. He will have no choice but to throw out the ticket – because, after all, the law’s the law.

And that motherfucker can work both ways, chief!

The cost is $49.95 – not cheap, but less than the cost of a single seatbelt ticket. And if you routinely drive unbuckled, Dr. Bob might save you hundreds of dollars over the years – not to mention the satisfaction of having successfully evaded Big Momma’s rules.

But is this the equivalent of the notorious catalytic converter “test pipes” that were once available in auto parts stores?

Disabling a vehicle’s emissions controls results in pollution of the “commons” – the air we all must breathe. It’s hard to argue that your right to pollute is being violated by laws that require your car to have intact/operational emissions equipment.

On the other hand, not wearing a seat belt may result in harm to you – assuming you have actually an accident; and assuming that accident is serious enough to cause injury; and – biggest assumption of all – assuming that the wearing of a seat belt would make a difference. But even if we assume you will be injured as a result of not buckling up, no one else is directly threatened by your actions.

Driving unbuckled might be foolish, it might be something you’d never do yourself – but that’s beside the point. The relevant issue is – does the guy in the next lane’s decision not to wear his seat belt harm (or even threaten to harm) me?

And clearly, the answer is – no.

Some will try to argue that “social costs” justify seat belt laws; meaning – if you get injured as a result of not wearing your seat belt, then others bear the cost in the form of higher medical costs/insurance premiums/taxpayer burdens and so on.

But isn’t the same true of other private lifestyle choices  – from what and how much we eat to whether we exercise or not to the recreational activities we partake of? Fat people have much higher lifetime (and much more real as opposed to theoretical) health-related costs – borne by “society” – than athletic people. There is an absolute correlation between activity levels – and incidence of major illnesses such as heart disease and high blood pressure.

And so on, endlessly.

A line has to be drawn somewhere – or the alternative is a society in which every action or potential action taken by an individual may be checkmated by some tangential, hypothetical “harm” ginned up by an imaginative bureaucrat or busybody.

That line, it seems to me, is the one demarcating actions that present a clear threat to the lives or property or well-being of others. And by that reasonable standard, mandatory seat belt laws do not qualify.

So, here’s to Dr. Bob – and his “prescription” for dealing with laws that have no business being enforced in the first place. 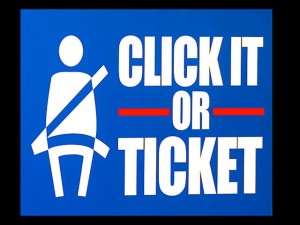 What the Founders Thought About Democracy