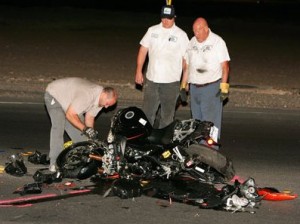 A recent poll in Superbike magazine asked the question, “How many times have you crashed/been knocked off in the past three years?”

The results of the poll, at the time I saw them (which may or may not have been the final figures) surprised me more than a little. They were as follows.

For a start, I was very surprised to see a figure as low as 41 percent for those who had not had an incident. I would have expected this figure to be far higher; around 90 – 95 percent would have been my guess. The last figure – 36 percent for those who have crashed or been knocked off more than ten times beggars all belief unless they are all getting rear ended riding in the rush hours in major cities. In the club I belong to there have been four accidents I am aware of (one fatal) in the last five years or so. With an average of around 300 members, if my math is correct, that works out at an accident rate of around 0.3 percent over the five year period.

Over my 60 year motorcycling career (excluding the times I came off trying out speedway riding) I recollect coming off my Triumph T110 twice. First time was when the center stand return spring broke and the stand swung forward as I braked and snagged the tarmac as I went into a left hander. The second time was cornering on snow and ice. I dropped my Sunbeam B23S once bump starting it and came off once on ice. (Memo to self: Always pull bike back against compression before bump starting.)

I had a major crash with a Sunbeam S8 combination when a car, running the lights, hit me as I was turning off a main road. I dropped my Douglas 90 Plus once, at slow speed, cornering on snow and ice. I also dropped my Suzuki GSX600, at a standstill, when stopping in a narrow lane and putting my left foot down into a grass covered hole. Only the S8 incident involved another vehicle. I’ve probably now covered getting on for 400,000 miles on bikes, giving me an average of around 6,700 m/yr. At a rough estimation this gives me an accident rate of 1 per 57,000 miles or 8.5 years. If we exclude the bump start incident and snow and ice events – in those days the bike was a 365 days a year transport – the rate drops to 1 per 100,000 miles or 15 years. (Curiously this is roughly the same accident rate as in the car, except that all car incidents did involve other vehicles and all bar two, for which I admitted liability, resulted in successful claims against the other driver’s insurance.)

Wondering why my personal experience differed so much from the results of the poll I looked up some of our government (UK) statistics to see what the main causes of two wheeled accidents were. Figures for 2008, 2009 and 2010 are not yet available as far as I can see. The 2007 figures were published, were available and are probably still reasonably representative.

My immediate reaction, which may or may not be correct, is that the riders who admitted being involved in ten or more incidents in the last three years were either having a joke or fell into the top five categories above. The majority of the riders I have seen riding badly here in Lincolnshire fall mainly into Group 4 – careless, reckless or in a hurry. Often I have seen riders, at high speed, overtaking long lines of traffic, up blind crested hills, or into blind bends apparently oblivious to the fact that someone may be coming towards them, at the same speed, in the opposite direction. Since they cannot see that the route they are taking is clear then they must also fall into Group 1, failing to look properly.

Hang about though. Doesn’t that also mean that they also fall into Group 3 (failure to judge another’s path or speed)? If they cannot stop in half the distance they can see ahead and they are on the wrong side of the road, then, unless they can pull into a gap or brake themselves out of trouble they will hit anything coming towards them at their speed. If so then they must also fall into Group 7 as well (traveling Too Fast for the conditions) and, possibly, Group 9 (the sudden braking group).

My analysis may be a bit hazy, but it does reinforce one of my long held tenets. I have always believed that an accident (is there such a thing?) is caused by a combination of events. I believe most arise through someone making an error, or several errors, of judgment. These errors are often coupled with someone else either not being sufficiently alert to see what is happening, or being unsighted and not being able to see what was happening – with both cases resulting in them not taking an appropriate preventive action.

That little poll in Superbike magazine certainly caused me to think about the way we ride. I still don’t know the real answer as to why my experience differs so much from the poll, but I think it has made me think more deeply about the things that cause “accidents.” I will continue to ride by my golden rule:  Ride to Survive. hopefully you will do the same.

Later this month I hope to be participating in a police sponsored “Performance Plus” training course – all being well this could well form the basis of another thought- provoking article.

Ken Lines has been riding motorcycles since the age of sixteen and has owned around thirteen British bikes and four Japanese machines so far.

There Will be More