Ad agency Carmichael Lynch, a unit of Interpublic Group, said many factors went into the decision, including the fact that the Milwaukee-based motorcycle maker has slashed its marketing spending in recent years amid slumping sales.

According to Kantar Media, Harley-Davidson spent about $11 million on television ads and other measured media last year, half its spending from 2007.

“It got to the point where we no longer felt we could take that brand forward,” Spong said.

Although Harley-Davidson isn’t a big spender on traditional media, the brand is one of the best known in the world with a loyal legion of fans who don the company’s black-and-orange logo.

The company’s fans may be fervent but its sales are not as people focus on necessities in the economic downturn. Harley-Davidson has been restructuring for more than a year. Last month it said sales of its motorcycles continued to fall in the second quarter, though the pace of declines eased. Worldwide retail sales fell 5.5 percent, a less-steep drop than the 18 percent first-quarter decline.

Harley-Davidson began its relationship with Minneapolis-based Carmichael Lynch in 1979 and had been the firm’s second-oldest client.

The company said in a statement it has a big roster of ad agencies, and Chief Marketing Officer Mark-Hans Richer said the company feels good about its creative direction. It is making progress reaching new consumers including women and younger people. And it is shifting its marketing to more agencies as it goes after new riders in new ways, including online and through social networks.

“We haven’t tried to be all things to all people,” Richer said. “We tried to be what we are to more people and we’re making progress on that front.”

Carmichael Lynch, which has Subaru as a client, gave Harley its 90-day notice last Friday. That means the ties will be severed in late November.
Harley-Davidson said it will not conduct an agency review process or look to replace Carmichael Lynch.

Spong said none of the firm’s 250 employees would be cut because their work would be shifted to new accounts, which he declined to name. 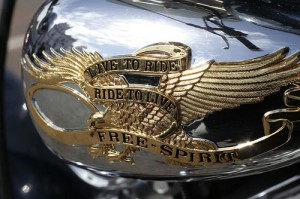