A crappy car is called a “lemon” – and lots of other unprintable things besides. But what do you call a used-up/thrashed/wrecked/you-don’t-want-it bike?

I like “Two Wheeled Turducken.” So, what precautions can you take to make sure you don’t end up with one?

Before you even begin shopping, figure out what the max amount you can afford to pay is. This will help narrow down the field and also keep you out of trouble (by over-spending).

Be sure to factor in all the “peripheral costs” you may not have thought about, such as insurance, registration and taxes. Insurance is the big one – especially if you’re a younger rider (under 35) and especially if you’re looking to buy a used sport bike. The insurance on one of these bikes can be killer – $1,000 or more per year, even if you have a perfect DMV record. It’s smart, therefore, to call your insurance company before you even go see the bike to ask them what it would cost to insure. Get a firm quote, too – from an actual agent and in writing – not an online “ballpark” quote that could change after you buy the bike. It’s miserable to have just bought a new crotch rocket only to find out you can’t afford to ride the thing because the policy costs so much.

Not as critical, but still important: Don’t forget to do the mental math about things the bike you’re looking at might need in the way of service and maintenance – for example, new tires. A new set of skins on a high-performance sport bike can run $300 or even more, depending on the bike. Other stuff to think about includes chain/sprockets, critically necessary valve lash adjustments, fluid changes and so on (more on this below, under “checklist”).

How about gear? Do you already have a helmet, jacket and gloves (the absolute bare minimum)? If not, you’ll be needing to buy these items – and a good helmet will cost you a couple hundred bucks (stay away from cheap units; they don’t fit well, are heavier – which will hurt your neck and contribute to rider fatigue – and may not meet the highest – British/Euro – safety ratings). Gloves are another $50 or so and a decent jacket $100-$200 on top of that.

Bottom line, stay within your budget. Ideally, under it. Unexpected stuff is more likely to come up than not – and it’s nice to have the extra coin available to deal with it when it does.

A good way to begin your actual search is by asking friends/fellow riders; let them know you’re looking for a bike. Word-of-mouth recommendations are usually solid, because usually, friends will at least try not to steer you wrong. Also, you might get first dibs on a bike that’s not yet officially for sale. As in, “Hey, I know Joe’s got a Goldwing he hardly ever rides and that he’s thinking about selling it. You ought to ask him about it.”

Other resources include online communities such as www.craigslist.org (see the “motorcycles” category), which is searchable both regionally (by state) as well as nationally. Walneck’s Classic Cycle (see http://www.walnecks.com) is a great tool for locating a vintage or special interest older bike. For newer stuff, try CycleTrader (see http://www.cycletrader.com). Like Craigs, both Walnek’s and CycleTrader let you search locally, by region (or within a specified radius of your ZIP code) as well as nationally.

EBay is another option – but if you go this route bear in mind you may have to deal with buying a bike sight-unseen (other than pictures, which can be seriously misleading) in another state or part of the country. Huge risk factor there. There’s also the issue of sending money to an unknown party, possibly before you ever get to see the bike in person – as well as potential hassles with the title and other paperwork. For this reason, I would not recommend eBay unless you’re looking for a really hard-to-find/unusual bike that may require a nationwide search and some willingness to go out on a limb.

Ideally, go for something within reasonable riding/driving range: a bike located close enough to home that you can go check it out and, if you like it, ride it home (or haul it home in your truck).

Now for the checklist/inspection of the bike itself:

* Is the bike close to being “as advertised”?

If it’s not, or the seller seems iffy in any way, he probably is – and so is the bike. Walk away. Unless it is a one-of-a-kind bike, your best bet is to continue shopping.

* Does it seem “too good to be true” as far as price or anything else?

If yes, be suspicious – and cautious. People don’t sell things for much less than they’re worth – unless there’s a good reason for it.

* Does the mileage on the odometer jibe with the overall physical appearance of the bike? If it does not, be wary.

* Has the bike ever been down?

Even a fairly minor wreck can ruin a bike by bending a key structural components such as the frame or swingarm. Before you throw a leg over the seat, do a careful walk-around, looking for any signs of road rash. If you find some on the frame or engine cases (look for chipped cooling fins or signs of repair,etc.) this is a bike you don’t want. On sport bikes, be suspicious if the plastic bodywork is obviously new or repainted. It may have been replaced after a bad spill. Be suspicious if the side signals/stalks have obviously been replaced. These are usually damaged when the bike gets dropped and so replacement is a sign the bike has been dropped.

For example, valve clearance adjustments – especially on sport bikes. If this hasn’t been done, not only will it need to be done – at your expense – the engine may have suffered excessive wear and tear if it hasn’t been done at the specified intervals. If the seller can’t produce proof that this service has been done, assume it hasn’t been done. Same goes with coolant changes on water-cooled bikes. It is very important that this stuff gets done according to the bike manufacturer’s recommendations. Replacing a clogged radiator on a bike can cost $500 or more.

Check the sight glass in the reservoirs for the clutch and brake fluid. It should be translucent/honey-colored. If it’s dark brown/black then it’s likely important maintenance has been skipped. Brake/clutch fluid should be changed out at least every two years.

Look for signs of seepage around the front fork seals, as well as cracks in the fork boots. Ditto the rear shock. Work the front end up and down by pushing on it. If you see any oil leaks at the forks (or shocks) it means major – expensive – work will be needed.

Don’t sweat minor cosmetic stuff such as cracks in the seat or scratches (if minor) on the boydwork. These can be easily repaired and don’t affect the bike’s safety or reliability. But you can use stuff like that as a negotiating point.

Ask the seller to have the bike “cold” when you come to see it. An already warmed-up bike could be hiding expensive to fix problems you’ll only discover later.

Before you hit the starter, put the ignition key in the “run” position and check to see that all warning lights come on and gauges read correctly. If a major warning light such as the oil pressure or temperature or volts light isn’t working, ask why and don’t buy the bike until you know for 100 percent sure it’s just a dead bulb or something else minor. Also try the signals, horn and any accessories. Make sure everything works properly and if not, ask why.

The bike should start immediately and quickly settle into a regular idle without your having to work the throttle (or choke) to keep it from dying. A hard starting/rough running bike may just need a tune-up or need to have its carbs (or injectors, if the bike has EFI) cleaned. But there may also be more serious trouble. Either way, it’s going to take time and money to deal with. Make a mental note to yourself.

Watch for any significant smoke at start-up. A small puff of blue or black smoke is ok, provided it goes away shortly after the bike is started. If the engine continues to produce blue smoke while idling or when you “blip” the throttle, it likely has worn rings/low compression or needs a valve job. Expensive work. If it spews black smoke, it means it’s running overly-rich; that’s not a serious mechanical problem – but it does mean maintenance work is required.

While the bike’s idling, look at the headlight. Does it flicker or change intensity as the engine is revved? If it does, there may be a problem with the bike’s generator/charging system or wiring. If the bike has a Volt gauge, observe the reading. High or low (or erratic/fluctuating) indicates a problem. Same with the temperature gauge. It should hold steady right in the middle – and not swing to either extreme.

Evaluate the clutch/transmission. The “pull” should be smooth and consistent. If it’s too tight or too loose, it could need a minor adjustment – or a major repair. A light downward tap on the shifter should get you first gear; if it “hangs up” or seems to want to stay in neutral, there may be a transmission problem. Big Red Flag: You should not be able to shift up into second from neutral with the bike stationary. Once under way, the transmission should shift smoothly from gear to gear; if it ever pops out of a forward range on its own, or doesn’t mesh gears smoothly, etc., it’s a sign there may be a serious problem with the gearbox.

Shaft drive bikes: If possible, remove the oil fill hole (usually located near the rear wheel) and check out the lube (some will/should drip out). If it’s gritty feeling that’s a big clue about possible problems. Listen for weird noises, including any grinding or slipping sounds.

Chain and sprockets: It’s a good idea to check that there’s not too much slack in the chain before you take a test-ride, just for safety’s sake. Don’t worry too much about chain wear and tear, though – unless it’s excessive for the advertised age/odometer reading (most chains are good for 10,000 miles or so). Adjustment is simple and replacing chain/sprockets isn’t massively expensive or difficult. Assuming the rest of the bike’s ok, don’t worry too much about that. Same deal with tires and brake pads. But be sure you inspect for signs of excessive wear/damage to disc brake rotors and calipers (such as grooves cut into the rotors, for instance, or seepage around the calipers) which can be expensive to fix.

Does the bike track straight? If not – or there’s wobbling through the handlebars, walk away. It could be a minor wheel imbalance. It could something much worse. Best to continue shopping.

Try the brakes (both front and rear). They should feel firm and neither grabby or spongy – and should slow the bike down effectively. Pulsating, excessive softness or loud screeching could mean trouble – ranging from air in the system that needs to be bled out to a bad master cylinder/caliper(s) to warped rotors and who-knows-what.

Be 100 percent sure the paperwork is clean. Do not let any money change hands unless the seller actually is the owner of the bike and has a clear title to it with no liens or absent co-signers. It is a monster hassle to buy a bike and then find out you can’t get it registered or titled in your name because of something skeevy with the former owner/paperwork. 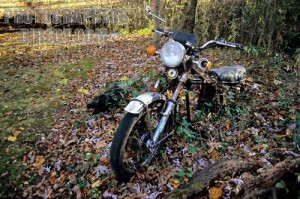