Before there were “SUVs” there were Land Rovers – the four-wheel-drives of the country gentry.

The only thing American-made that was even close was the old Jeep Wagoneer.

Then came the SUV boom – driven by the home equity-affluent middle class. $50,000 SUVs became as common as IROC-Z Camaros once were back in the late 1980s.

These days, a 15 mpg $50,000 SUV is the four-wheel-drive equivalent of an underwater mortgage on a suburban McMansion. At least, for the no-longer-equity-affluent middle class. They won’t be buying $50k SUVs anytime soon. And the bread-and-butter brands probably won’t be building them for much longer as a result. Ford just converted the Explorer into a front-wheel-drive, four-cylinder-powered “crossover.” No more V-8. No more Eddie Bauer Editions.

A heavily updated version of the previous LR3. It’s a mid-sized, ultra-luxury 4WD SUV that can seat up to seven people with the optional third row.

The LR4 is equipped with an all-new 5.0 liter 375 hp V-8, replacing the LR3’s 4.4 liter, 300 hp V-8. The interior has also been updated as well – with a new hard-drive-based navigation system, Bluetooth wireless connectivity, iPod hook-up and satellite radio.

Superb off-road tenacity is great if you really do need to go off-road and know how to drive off-road. But if you don’t – and intend to drive your LR4 like a standard car, on-road (especially in corners) you may not like its heavy, ponderous handling.

The new LR4 comes with one standard powertrain – a 5.0 liter all-alloy V-8 rated at 375 hp teamed with a six-speed automatic and automatic four-wheel-drive.

The old LR3 was underpowered – which sounds a little off given it did have 300 hp. But 300 hp is marginal when close to 6,000 lbs. of SUV is yoked to it. It took the LR3 about 8.3 seconds to reach 60 mph – in the same ballpark as most economy compacts such as a Toyota Corolla. That simply won’t do. The LR4’s new V-8 cuts the 0-60 time down by almost one full second, to about 7.5 seconds. It’s not fast, but it’s fast enough to get away from $13,000 prolemobiles and that is an absolute must.

Towing capacity (7,716 lbs. max) is the same as last year. So is gas mileage, rated by the EPA at 12 city, 17 highway. It’s not going to make the global warming crowd happy, but it should impress prospective buyers given the new model at least matches the old model’s efficiency even though it has a larger and much more powerful V-8 under the hood.

The LR4 has an extremely sophisticated 4WD system that’s fully capable of dealing with severe conditions such as deep mud, steep inclines and declines, crawling over large rocks and through heavy snow and a foot of running water. The system features terrain-sensing technology that adjusts throttle response and tailors engine output to individual wheels.

Via a console mounted rotary knob, the driver can select for conditions ranging from gravel/grass/snow to mud and ruts to rock crawl. The system features low range gearing, locking front and rear axles, Hill Descent Control and an adjustable height suspension system that can be raised up or lowered at the touch of a button.

The thing to know about the LR4 relative to others in this segment is that it is a real-deal, no compromises 4WD. The thing will literally go just about anywhere – and get back out, too. This extreme off-road capability makes it almost unique in its class/price range. Competitors like the Mercedes-Benz ML Class and BMW X5 are much more street-oriented and far less capable off-road. Pretty much the only vehicle that can go toe-to-toe with the LR4 off-road (and also compete with it on luxury) is the Lexus GX460.

There’s just no hiding that heft once the LR4 gets rolling.

Land Rover has done a commendable job idiot-proofing the thing by building in plenty of understeer – not to mention the always-alert electronic stability control system that keeps the vehicle right-side up even when driven with zero respect for what it is – and what you shouldn’t do with it.

Driven reasonably, it’s fine. The problem is there are a lot of people who have no clue how to reasonably drive real SUVs like the LR4. It’s these people who might not be happy with this vehicle. They want the looks of a rugged off-roader and maybe the iconic brand cachet of owning a Land Rover. But the truth of the matter is they’d be be better off in a street-friendly light-duty SUV or crossover such as the Benz ML or BMW X5.

But if you do appreciate a real-deal 4WD, you will just love the LR4. Every detail has been conceived with serious use in mind. The seating position affords a commanding view all around you. The upright front glass and side panels never leave you guessing where the road drops off. The GPS system has terrain mapping (including topographical details) and there’s even a display showing your steering angle – eliminating the need to get out and check when you’re trying to crawl over and around tricky obstacles.

Driving an LR4 off-road – even in the worst conditions imaginable – is a lot like having a platoon of Marine Force Recon head-kickers with you in a really bad neighborhood.

You feel absolutely 100 percent secure you’re going to make it through.

The LR4 looks like a real-deal SUV ought to look. It’s boxy and upright and purposeful. Exterior styling updates for 2010 include new fender vents and a lattice grille (replacing the LR3’s triple bar grille). The interior has been much more obviously updated, with a completely new center stack and simplified control layout. Larger, rotary knobs replace the confusing array of Chiclet-sized buttons used in the LR3. A nice touch is a new analog clock. But it’s the only old-fashioned thing about the LR4.

Unique Land Rover features include a heated front windshield, which has an embedded defroster grid – plus available heated washer jets and heated steering wheel (along with heated seats) that comes with the optional Cold Climate equipment package.

The tall profile and two-piece rear gate help make the most of the available interior space (including 90 cubic feet of cargo capacity, more than the Benz ML and BMW X5, which have 72 and 75 cubic feet respectively – and much more than the puny 65 cubic feet in the Lexus GC460).

The third row seating that comes with the HSE package makes it feasible to carry up to seven people but the third row is not adult-friendly, at least not for more than very short trips. Still, it’s perfectly suitable back there for kids and young teens – and that gives the LR4 more versatility than SUVs and crossovers that don’t offer a third row at all.

There is more front-seat headroom in the LR than in the Benz ML, BMW X5 and Lexus GX460 – and noticeably more legroom than all of these except the ML, which has about the same (42.2 inches).

The LR4’s off-road bona fides have been discussed. The only price-competitive vehicle that can touch it is the Lexus GX460 – but it’s still a couple thousand bucks more expensive to start and its 301 hp V-8 is much less powerful than the LR4’s mighty 5 liter V-8.

Land Rover, the company, is very much like it corporate partner, Jaguar – in the sense that both build beautiful, appealing vehicles that have unfortunately had more than their fair share of quality control issues. However, things have been improving and while there’s no way to know until we have a few years of real-world data to examine, it’s a decent bet that the LR4 will prove much better in terms of reliability and minor/major gremlins than previous Land Rover vehicles.

Land Rover could boost buyer confidence by extending the powertrain coverage another year – or three – beyond the envelope of the basic warranty.

Every current safety technology is standard except for third row curtain air bags, which are included when third row seats are ordered. A surround-view parking camera system is available that works through the 7-inch LCD display in the center console.

If you’re able to afford such a vehicle – and need real-deal 4WD capability – nothing can touch the LR4. 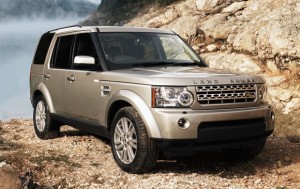 Update on the Glendale Sadist