From the Vega to the Chevette to the Cavalier to the Cobalt – GM’s economy cars have had their ups and downs.

Mostly, GM looked on small, economy-type cars as throwaways – “loss leaders,” in the language of Detroit. The money was in big cars (and bigger SUVs). So that’s where the effort went.

Exiting bankruptcy – and facing a world that has come to appreciate the virtue of well-built small cars – GM knows that so-so isn’t going to cut it anymore.

The 2011 Cruze shows GM has learned a hard lesson.

The big question is whether it’s in time to recover the market share now owned by the Japanese (and increasingly, the Koreans). Not to mention Ford – which has a helluva little car in the just-released 2011 Fiesta and an already successful slightly larger small car in the Focus.

The Cruze is a font-wheel-drive sedan that replaces the Cobalt as Chevrolet’s entry-level compact.

It competes against models like the slightly smaller Ford Fiesta and roughly same-size Ford Focus, Toyota Corolla and Honda Civic, among others.

A huge improvement over the outgoing Cobalt.

On looks, features and equipment, build quality, etc. this car is absolutely competitive with the segment leading Corolla and Civic – and nicer than the Focus.

Optional 1.4 liter turbo engine has on-demand boost for almost as much power as standard (non-turbo) 1.8 liter engine while achieving 40-plus MPGs on the highway.

Big (for a compact) 15 cubic foot trunk; comparable to some mid-sized cars’ trunks.

Chevrolet doesn’t have the Blue Chip status of the segment leading Corolla and Civic.

Long-term quality/durability is an open question.

Cruze comes with one of two available four-cylinder engines. The standard engine in the LS displaces 1.8 liters and produces 136 hp. Optional is a smaller 1.4 liter engine with a turbocharger that’s rated at 138 hp.

A six-speed manual is standard with either Cruze engine; a six-speed automatic (with manual shift function) is optional.

The purpose of the turbo four is not to offer more power/performance than the larger, non-turbo four does. It is to offer equivalent on-demand power/performance from a smaller, more fuel-efficient engine. At the time of this review, official EPA figures hadn’t been published – but GM is claiming the Cruze with 1.4 liter engine is capable of just over 40 miles per gallon on the highway – which if accurate would make it among the most fuel-efficient cars on the road.

An “Eco” package is available with the 1.4 liter engine that includes low rolling resistance tires plus aerodynamic tweaks to eke out maybe another 1-2 MPGs on top of that.

Acceleration is leisurely, regardless.

Both engines get the car to 60 mph in just under 10 seconds – with either transmission. But that’s par for the segment.

All versions of the Cruze are front-wheel-drive.

Older economy cars may not have sucked gas but they absolutely sucked to drive. They felt fragile, weak – and cheap. You drove one because you had to – and hated every minute of it.

New economy cars like the Cruze (and its competitors) are light-years improved. They may not be quick, but they do have adequate power for most driving situations – and more important than that, they feel tight and well-built. They’ll pull 80 mph all day, if you want (and can get away with it). The wheelcovers don’t fly off in corners. Hit a pothole and the suspension wont bottom out, kicking loose your fillings.

The Cruze differs from its competitors in approaching the fuel economy vs. power paradigm by using a turbo to provide on-demand power equivalent to a larger engine when the driver needs to accelerate quickly – with the superior fuel economy potential of a smaller engine during light-load/steady cruise driving. The Cruze’s optional 1.4 liter turbo engine is pretty much the smallest four-cylinder gas engine (outside of a hybrid or something really tiny like the two-seater SmartCar) on the market.

On the plus side, it performs just as GM intended. It delivers big engine (for an economy car) power, without surging, when you stab the gas – but it’s more economical than the larger (and thus, thirstier) non-turbo 1.8 liter engine.

On the downside, there is a roughly $2k price premium to get the turbo 1.4 liter engine, which, don’ forget, only produces 2 hp more and doesn’t significantly improve the car’s acceleration. Yes, it delivers better fuel economy (3-4 mpgs on top, according to estimates). But that up-front price will take some time to work off in the form of improved fuel economy.

Also, there’s the potential down-the-road cost issue of the turbocharger, which is an expensive piece of equipment. Many people buy economy-type cars expecting to be driving them 150,000-plus miles. Will the turbo last that long without needing a rebuild?

A Cruze plus is the six-speed manual transmission, which provides both a fuel economy and fun-to-drive benefit. It lowers engine RPM in top gear on the highway and though it doesn’t make the Cruze quicker by the stopwatch, it feels zippier because the gear spacing is tighter than in competitors like the Fiesta and Corolla, which have only five-speeds.

The exterior of this car is fairly generic small sedan-looking. It’s by no means unattractive, but nothing special, either. On the inside, though, the Cruze has a very handsome dual-cockpit layout accented (on higher trim versions) with two-tone inserts and brushed metal/nickle trim.

You can equip the Cruze with a variety of high-end-ish features, too – everything from leather and seat heaters to 18-inch alloy wheels. Some of this stuff is of debatable value in what’s supposed to be, after all, a value-priced car. The optional 18 inch wheels, for example. Sure, they look nice. But they also add significantly to the cost of the car and not just up-front, either. Large wheels require larger (and more expensive) tires; tires that also wear out sooner and which give the car a firmer (read: harsher) ride. In a Corvette or Camaro, big wheels and grippy, performance tires make sense; but the Cruze is supposed to be about getting from “a” to “b” comfortably and inexpensively. Eighteen-inch ree-uhms kind of defeats the purpose.

On the other side of the coin, all but the top-of-the-line LTZ trims come with drum rear brakes (instead of discs all around). Drums cost less up front and much less to maintain than disc brakes because the main service parts are cast iron/steel drums (cheap and hard to hurt) and even cheaper and long lasting shoes that can routinely go for 40,000 miles or more – vs. easy to damage (via an air gun over-tightening lug nuts during a tire rotation) rotors and (often shockingly expensive) calipers.

So, that’s a plus in terms of keeping down the Cruze’s ownership costs.

In fact it has the largest trunk of any car in this segment – and that makes the Cruze more road-trip viable (and family-friendly) than its small-car competition.

The standard-issue Cruze LS comes equipped with all the really important stuff – like air conditioning, power windows and locks, as well as a very decent CD and MP3-playing/satellite-ready stereo – standard.

Ditto the major safety stuff – which (like AC) is becoming a given on even low-cost vehicles. That means stability and traction control, ABS and curtain air bags. But the Cruze notches things up by also including a standard driver’s side knee air bag and rear seat side-impact bags, too (in addition to front seat side-impact bags). The knee air bag – a feature that as recently as two or three years ago was available for the most part only in high-end luxury vehicles – can dramatically reduce the severity of injuries to your legs in a front-end wreck. That it’s standard equipment even in base trim versions of the Cruze is much to Chevy’s credit.

A factory GPS unit is available but I would recommend skipping it because an aftermarket Garmin or similar unit will cost you less, can be used in other vehicles and perhaps most importantly – in five years’ time, if your aftermarket unit is out of date, upgrading it is easy and fairly cheap.

The Cruze’s biggest weakness is its fairly high price relative to the established players in this segment (Corolla and Civic) as well as newcomers like the thoroughly excellent Ford Fiesta, which is only slightly smaller outside and has nearly the same interior space, backseat legroom excepted. (Ford has an updated version of the Focus on deck for the 2012 model year; expect it to one-up the Cruze in several key categories.)

If Chevy had figured out a way to start this car out around $15k rather than over $16k, it’d be one of the top choices out there, without question.

It’s still a good choice, though – and that’s a lot more than you could say about its predecessor the Cobalt. 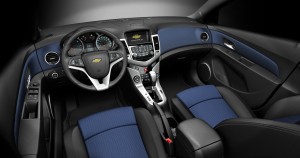