A woman in England was recently arrested for sleeping in her car.

Then she was arrested for not wanting to take an alcohol breath test.

Do you think that there’s a good possibility that she was sleeping in her car because she might have been tired? Perhaps because she may have had an alcoholic beverage and, therefore, decided to sleep it off?

In which case, she was acting responsibly.

She certainly wasn’t a threat to anyone else, or even to herself.

Shouldn’t she have been left in peace?

Instead, the woman was cuffed and stuffed, then brutally shoved into a prison cell by a government thug (more commonly referred to by the oxymoron “peace officer”). The government “service” that he provided was caught on surveillance tape.

http://www.youtube.com/watch?v=sqIH2EZMkFA&feature=player_embedded
Amazingly, the government thug was actually convicted of assault. Chalk one up for the good guys, at least.

What I’ve always wondered about, though, is why people are arrested for pulling over in order to sleep in their cars. Considering that driver fatigue is the number two-cause of auto accidents (driving under the influence is number three), you’d think that the law (and cops) would encourage people to pull off the road (or not get behind the wheel at all), to sleep for a bit (or sleep it off). Right?

And they (the cops) pull the same trick here. You can be arrested for “DWI” while sleeping in your car, even if the car is parked, the engine stone cold, the keys in your pocket and you’re soundly asleep on the back seat.

Thus, the cops actually encourage people to drive drunk. And thus, to become a threat to others.

You’re screwed either way, so why not at least try to make it home?

Asleep in your parked car, you’re a sitting duck.

The reason for this insanity is perfectly sane – if you’re a government thug: You’ve got another pretext for hassling (and often, assaulting) people who are just trying to avoid you and otherwise minding their own business. Cops are, after all, in the business of “law enforcement” (not justice) and thus, the more laws to enforce, the merrier. It enhances job security, satisfies the lust to dominate other people – and it keeps the “revenue” flowing.

And that’s what it’s all about. 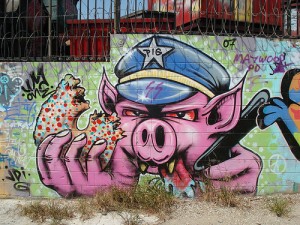