Diesels are at the top of the Dead Pool – on account of their particularly diesel exhaust byproducts, specifically particulates (aka, soot) and oxides of nitrogen (aka NOx). But diesels are much more fuel-efficient than gas-burning engines because they are compression ignition engines.

Instead of a spark to set off the explosion, the air/fuel charge is progressively squeezed (and thereby, heated) as the pistons ascends within its cylinder until – boom! – it ignites spontaneously.

More of the potential energy contained in the fuel is translated into useful mechanical energy.

This is why diesels go farther on a gallon of fuel than gas-burners. 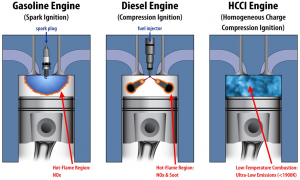 But diesels also have the aforesaid emissions issues – also unique to their design.

Most of this – almost all of this – has been dialed out or tamped down or otherwise sequestered, notwithstanding the despicably exaggerated presentations of the media. Nonetheless, diesels are persona non grata, especially in the United States but increasingly in Europe, too.

There are outright bans – and if not bans, then regulatory rigamarole so stringent and expensive to comply with as to make it not worth complying with them.

Electric cars are touted as the alternative. But – again – the presentation is wildly misleading. They can only be the alternative if cost isn’t a consideration (which is like a woman getting pregnant at 60 without sex and hell, without a man involved at all) and only if large numbers of people are willing to accept not-minor functional inconveniences – in particular, the best-case scenario 30-45 minute wait to recharge the battery pack at a “fast” charger.

Which is as likely as expecting that people will put up with a 30-45 minute wait to get a cheeseburger at a “fast” food restaurant. 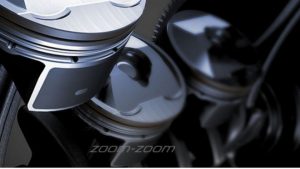 Mazda may have a better option: The diesel gas engine.

It won’t burn diesel fuel, of course. But it will diesel. That is, it will compression-ignite the air-fuel mixture. But it will also transition to spark ignition under certain conditions, the idea being to give the best of both worlds. This type of engine is called Homogenous Charge Compression Ignition – and Mazda says this will uptick fuel efficiency by 30 percent vs. an otherwise same-size spark-ignition engine.

And it will do this – so Mazda claims and hopes – without the soot and NOx emissions that have become politically problematic for diesel-burning diesel engines.

A side benefit will be more torque – something diesel-diesels have always had more of (and sooner) than spark-ignition engines.

The new gas-burning diesel will be marketed as Skyactiv-X – alongside Mazda’s current line of Skyactiv-G gas (not diesel-gas) engines and Skyactive-D diesel (diesel) engines – beginning in 2019. Here’s the official announcement. 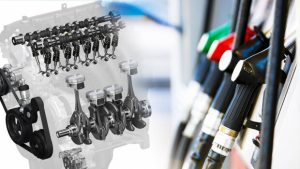 And there is always a but.

This is a complex system, first of all. Compression-ignition and spark-ignition must work together, seamlessly. This presents a huge engineering challenge because of the very different operating characteristics of the two types of internal combustion.

Diesels burble – and sometime rattle. The word, “diesel” is also an adjective. Sound deadening can deal with some of this, of course. But diesels are also low  RPM engines – usually all out of steam by 4,500 or less RPM.

This is not very Zoom! Zoom!

Will Mazda buyers warm to this? 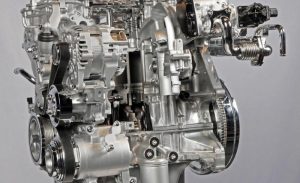 They may – assuming also that the Skyactiv-X engines’ price-to-mileage ratio falls within the economic sweet spot. Provided, in other words, that the new diesel-gas engine doesn’t cost too much relative to the mileage it delivers.

That has become an issue for hybrids. As gas prices have fallen, so have sales of hybrid-powered cars – precisely because the price-to-mileage ratio is no longer as favorable and won’t be unless gas prices go up by at least $1 per gallon. No matter how “cool” the technology may be, if the car costs more to buy, its cost to own is necessarily higher.

This matters to most people – even if it does not matter to the government.

As a purely technical achievement, what Mazda has managed to do is remarkable. Engineers have been trying to make a viable compression-ignition gas engine for generations.

But the Emperor’s Clothes question remains: Is any of this really necessary?

Gasoline is inexpensive – a consequence of abundance rather than scarcity. Gas-burning engines (spark-ignition engines) are remarkably efficient and would or could be 50 percent more so if the government would quit forcing the car companies to build 3,000 pound-plus tanks (for “safety”).

Currently available diesel engines are capable of 60-plus MPG and are “clean.” Just not that extra .005 percent “cleaner” demanded by the government.

Instead of simple, cost-effective solutions we get complex and expensive ones.

Because that’s what government excels at.