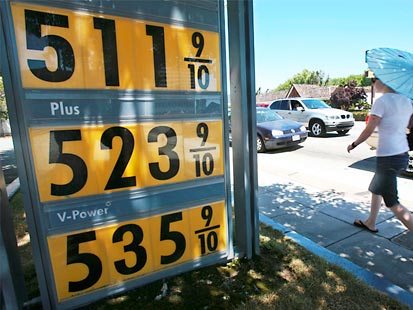 The way things are going,  gas prices will probably top $5 a gallon this summer. We may be lucky if it stops there. Some industry experts, including former Shell CEO John Hoffmeister, believe that a combination of bustin’ loose inflation and real fears about an impending war in the Middle East being pushed by neo-con chickenhawks will push gas over $5 per gallon by July. An actual war with Iran, courtesy of these chickenhawks, could push prices much higher.

Remember: It was $4 a gallon gas back in ’08 that triggered the economic free-fall we’re still trying to pull out of today. And while many of us have acclimated ourselves to the New Normal of $3-and-something gas, an uptick to $4 or more is likely to have the same effect it had back in ’08 – only worse because millions of people don’t have the reserve cash (savings, equity) they still had back in ’08 – many don’t even have a job.

Now, for example, might be a good time to buy a motorcycle or motor scooter for “just in case.” Rising gas prices are a good excuse to indulge – and smart policy if gas prices do go through the roof.  Not just because of the money you’ll save on gas, either. If the cost of fuel continues to rise, expect the cost of high-mileage transportation options to go up, too. Supply and demand. Simple. A used 50 MPG bike that goes for $2,500 today might very well draw $3,500 (or more) a couple of moths from now, in a world of $5 regular. Same goes for scooters. They were very popular circa ’08 – and popularity equals pay more.  Right now, it’s still cold out and gas prices, though higher, are still manageable. I have a buddy who owns a bike shop; he also sells Chinese-made scooters. Things have been slow for the past year. If you walked into his store today, odds are you’d ride out on a good deal. But tomorrow? What happens when customers are lining up for his 80 MPG scooters? Right. Forget about haggling. If you don’t want to pay full MSRP sticker, the next guy in line behind you will. So, again, if you’re worried about what’s coming and are considering possible ways to insulate yourself, the time is, indeed, now.

Another option is a basic beater. Something you can sub in for your current (thirstier) ride, to get you from a to b as inexpensively as possible or at least, less expensively. Let me give you an example:

Friends of ours recently nabbed a steal of a deal on a one-owner late ’80s GM compact-sized station wagon. Just over 70,000 miles, great shape – and 30-plus MPG on the highway. They picked it up at an estate sale for $2,200. If they drive this unit instead of their Suburban (12 MPG) they’ll have recovered the $2,200 outlay within a year. After that, it’s gravy.

As with bikes and scooters, expect the price of used economy cars to skyrocket along with the cost of gas. And not just because people will want more fuel-efficient cars. $5 gas is going to make it that much harder for many people – millions of people – to buy a new car, including new economy cars. When food costs 15 percent more; when your heating bill has gone up $100/month – and so on – there’s less money on hand to buy a new car. This will boost the price of used cars, which people will smile on as more financially feasible. And high-mileage models will be especially popular.

The last thing is to consider doing what the smart money does on Wall Street – get out before the bottom falls out.

If you currently own a big SUV – or even a mid-sized crossover – be aware that its value could drop like, well, a Hummer falling down an elevator shaft if we get to $5 a gallon gas. Remember Hummers? Don’t see them much anymore. Even with gas “reasonable” at $3.60 per gallon, they are about as popular as mustard on a hot fudge sundae. The people who held keys to them back in ’08 found they owned the four-wheel-drive equivalent of an underwater McMansion. No one wanted them. Depreciation rates soared. The Hummer itself soon became extinct.

I expect a lot of the same to happen again. So if you have a vehicle likely to become a liability in a world of $5 gas, it might not be a bad idea to consider selling it now – before it loses 30 percent of its market value in a matter of weeks.