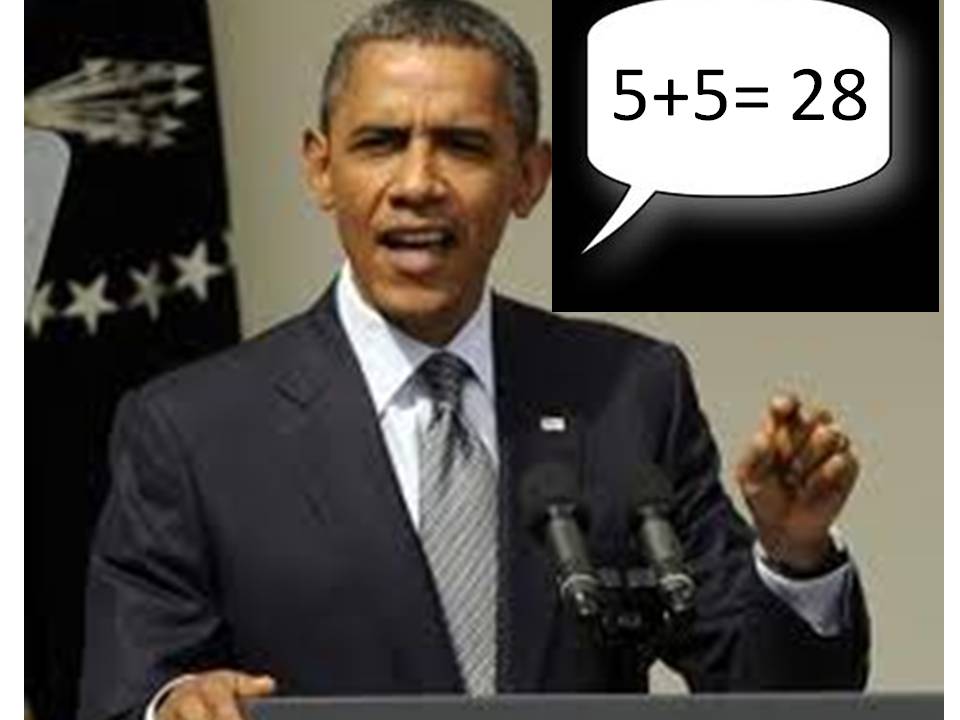 Obama can read a TelePrompter pretty well – but math is apparently not his strong suit. Responding to questions about the rising cost of gas (really, the falling purchasing power of the increasingly worthless dollar), our Great Leader explained that his 55 MPG fuel economy mandate would provide relief:

“…folks will be able to fill up every two weeks instead of every week, saving the typical family more than $8,000 at the pump over time,” he said. “That’s a big deal, especially as families are yet again feeling the pinch from rising gas prices.”

Very folksy talk. No doubt he assumes the folks are as innumerate as he is a smooth talker.

Because what he is saying amounts to – first – you will have to buy a new Obama Car in order to offset the cost of fuel. Let’s work that out and see how it will help the folks.

The average cost of a new car – 2012 – is about $18,000 (not including the financing, not including the taxes, including personal property taxes where applicable, or the cost of a full-coverage insurance policy on a new car). This amount will buy you something along the lines of a Honda Civic one step up from the base model without AC.

Let’s say gas goes to $5 per gallon. That’s about $1.25 in depreciated dollars more than we were paying around this time last year.

So if you have a 15 gallon tank in your car and you fill up once a week, you are now spending about $19 more to fill’er up. Times four times twelve, that works out to $900 more a year. It’s a lot of money, yes. But it’s a lot less than the cost of an $18,000 new car (again, not counting interest payments, taxes and insurance).

Well, let’s see. Being generous and assuming 0 percent interest on a five-year loan, the payment on an $18,000 balance works out to $300 a month. So, using Obama maff, your “savings” comes to… well… uh… hmmm.

Three months after you’ve bought your new car, you’re starting to pay a lot more per month for the car than you were paying for gas.

Oh, but wait – because it gets better.

The $18,000 car used in this example is a 2012 model car – not the Obama Car of 2025, when new cars will be required by government mandate to average 55 MPG. And mandates aren’t free. Technology, R&D, hardware, tooling, new materials, etc. – it all costs money.  Perhaps Obama has watched too many Star Trek episodes and imagines that just like Captain Picard, he can “make it so” merely by saying so.

Look at current hybrids for a taste of what’s to come. They all cost several thousand dollars more than comparable non-hybrid cars. A 2012 Prius hatchback, for example, has a base sticker price of $23,520 – about $5,500 more than the current average car’s cost. Call it the Obama Car Surcharge.

And none of them – not even the sainted Toyota Prius – averages 55 MPG.

To get to the magic 55 MPG mark, it will be necessary to re-invent the car (and the car engine and lots of other stuff besides).

Expect the Obama Car Surcharge to go up. A lot.

We’ll pay another way, too. By prematurely throwing away a number of otherwise still-saleable new car models long before their R&D and tooling costs have been amortized. Unless there is an engineering miracle, expect anything with a V-8 (or V-6) to be placed on the endangered species list. Large sedans (excepting high-dollar luxury sedans) are already gone. Mid-sized cars will follow – at least as mass-market vehicles. So also most current pick-up trucks, SUVs and crossovers – as none of them come within spitting distance of 30 MPG, let alone 55.

We’ll just throw them away.

And who will make up the shortfall? You and I will. Either in the form of directly passed-on costs (higher new car prices) or in the form of reduced stock value as a result of the automakers’ declining profitability. We may also get to pay for a new round of bailouts as this could easily result in several too big to fail automakers going belly up (again).

There are diesels – some of which (in Europe) are capable of more than 55 MPG already. But take note that none of these cars are sold here, because our government’s screwy regulations make it too much hassle (and not profitable enough) for these cars to be sold here. It’s not that the Europeans are loosey goosey on pollution controls. They just have different ones – and rejiggering their Euro-spec diesels to comply with Uncle’s specs isn’t worth the trouble.

So nix that reasonable solution.

There will also be a conflict between the government’s fuel economy edicts and its “safety” edicts – which have already added several hundred pounds of deadweight to the average new car. And every pound of weight imposes a fuel efficiency penalty. The only inexpensive way to improve fuel economy is to reduce the curb weight of a car. But to maintain the same level of “safety,” wholesale redesigns will be required – as well as the use of costly alloys and composites. You can’t have your cake (high economy) and eat it (“safety”) too. Something will have to give.

And something will give.

You and I will give more money.

It will either be given at the pump, in the form of depreciated Obama Bucks to buy gas that hasn’t actually gotten more expensive in real terms but which nonetheless costs us more  because our dollars are worth less. Or we’ll be herded into a new Obama Car and swap an extra $900 a year in gas costs for a $400-$500 a month debt albatross around our necks .