Diesel-powered vehicles are making a big comeback – no surprise given renewed buyer interest in high-efficiency, long-life vehicles. But like gas-burners, diesels have their downsides as well as their upsides.

Here’s a look at both sides of the equation:

Many people remember the days when “diesel” meant “slow.” But modern diesel engines such as those offered by VW (Jetta TDI) and BMW (330d) and Mercedes (E350 BlueTec) can deliver 40-plus MPGs – not far off the pace of complex, expensive and slow gas-electric hybrids – while getting the cars they’re in to 60 mph in as little as 7 seconds.

In a large truck such as the current GM 2500 HD series or Ford F250, diesel-equipped versions can pull/haul much more weight than the gas-powered versions while burning less fuel doing it.

Assuming proper maintenance, it is not unusual for a diesel engine to run 300,000 miles or more without needing major work. Even though modern gas engines generally last much longer than they used to, few can go more than 200,000 miles or so without beginning to show definite signs of wear and tear, such as smoky blue exhaust and declining gas mileage/performance.

* Diesels can burn more than one type of fuel –

For example, old fry grease – aka Waste Vegetable Oil (WVO). Frugally-minded people have been powering their diesel vehicles with this stuff at little or no cost by getting local restaurants and so on to give it to them for free. Modifications to the engine (such as a preheater to keep the grease from congealing) will be needed, but you can operate a diesel engine with such stuff in a pinch.

“Biodiesel” (not the same as WVO) can be brewed at home, too.

Gas engines, meanwhile, are designed to burn gas only. And you can’t refine your own gas, if it came to that.

New federal laws mandating “Ultra Low Sulfur” fuel (15 PPM sulfur) have jacked-up the price per gallon of diesel, which is still close to $3 per gallon in most areas of the country, while unleaded regular is often available for closer to $2.30 or so. The higher at-the-pump price eats into the down-the-road mileage advantage that diesels have.

Another potential problem with the new Ultra Low Sulfur diesel fuel is that it doesn’t have the same lubricating qualities (due to the low sulfur content) as diesel fuel used to have, which could mean faster wear and tear – and shorter engine life. Some diesel engine experts recommend that additives (http://www.powerservice.com/dfs/5) be used – especially in diesel engines built before about 1997 – to make up for the poorer lubricating qualities of the new Ultra Low Sulfur diesel fuel.

In addition to Ultra Low Sulfur diesel fuel, the car companies have had to add urea injection and particulate traps to their diesel engines, in order to comply with the latest tailpipe emissions requirements. The urea tanks have to be refilled regularly – an additional expense (appx. $20-$40 or so each time) and the particulate traps add a new layer of maintenance – and thus, expense.

No one really knows, either, how these systems – and the diesel engines themselves – will hold up over the long haul, or under severe conditions such as extreme cold/heat.

I recently test drove a diesel-powered version of the 2011 Chevy Silverado 2500 HD equipped with the optional Duramax diesel V-8. Selecting this engine (and the mandatory heavy-duty transmission that it’s paired with) added nearly $10,000 to the price of the truck. In a passenger car like the VW Jetta TDI, choosing the diesel over the gas engine adds about $2,500 to the sticker price.

The much higher up-front costs will take many years of driving to wash away in the form of at-the-pump savings on fuel – unless, of course, gas prices shoot up again to $4 (or more) per gallon. Which they very well could.

In which case,  everything changes. In a world of $4 or $5 per gallon regular unleaded, a diesel vehicle that gets 15-2- percent better mileage than a gas equivalent could work off the higher up-front costs in as little as a year or two of driving. 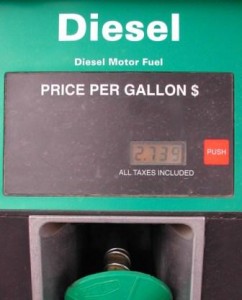