I just did a burnout – which is nothing unusual, except …

I did it in a Hyundai.

The Genesis is a mid-sized, rear-wheel-drive, two-plus-two sport coupe in the Camaro/Mustang tradition – lacking only a V-8 engine (for now) and bodybuilder exterior styling to seal the deal.

The Genesis coupe was introduced last year as an all-new model for Hyundai. Despite being a brand-new model, there are a number of significant changes for 2011, including an updated interior (new materials, including padded armrests and additional chrome trim for the gauge cluster) as well as a new performance-minded 3.8 R-Spec package. It includes the 3.8 V-6 and manual transmission, plus the other performance equipment that comes in the 3.8 GT and 3.8 Track – but with a much lower base price of $26,750.

Lower profile appearance lets you slide under the radar instead of drawing the attention of every cop in town.

Not as heavy – or hulking – as a Camaro or Mustang (or Challenger).

Better warranty coverage than you’d get with a Camaro, Mustang or Challenger.

No V-8 (for the moment) in a segment where V-8s are pretty much mandatory must-haves.

A Mustang GT, Camaro SS or Challenger R/T will clean its clock in a straight line.

Base V-6s in new Mustang, Camaro and Challenger have nearly as much power as the optional V-6 in the Genesis – and lower starting MSRPs.

Doesn’t have the history you get with a Camaro, Mustang or Challenger.

Lacks the Drive-Thru Hero studliness of the retro-revival muscle cars.

All versions are rear-wheel-drive.

Four-cylinder/manual versions do 0-60 in just under 7 seconds; the V-6/six-speed cuts a second off that time.

Gas mileage with the four-cylinder engine and six speed manual is rated by the EPA at 21 city, 30 highway; V-6/automatic versions register 17 city, 27 highway.

Rear-wheel-drive performance is not unique to American brands – but two-plus-twos with high-powered V-8s in the high $20k-low-$30k range have been exclusively Detroit’s turf since the 1960s all the way through to now.When – not if – Hyundai puts a V-8 into this thing (the Genesis sedan already offers a 4.6 liter, 368 hp V-8) American muscle cars will be facing the first direct challenge to their 40-plus year dominance of the market for this type of car.

The Big Three have already upped the ante in apparent recognition of the Hyundai Threat – by putting 300-plus horsepower V-6s into their muscle coupes as the standard powerplants – with 400-plus hp V-8s available optionally. Even the Challenger V-6 now has over 300 hp (up from 250, previously).

Still, the Genesis remains competitive, despite its short-term lack of a V-8 and with a top dog engine that metes out “only” 306 horsepower.

Even though the Big Three’s muscle coupes all have more power, even in base V-6 form – they’re also carting around a lot more weight. At just 3,294 lbs. (vs. 3,780 lbs. for the base 2011 V-6 Camaro, 3,750 lbs. for the base 2011 V-6 Mustang – and 3,720 lbs. for the V-6 Challenger coupe) the Genesis is a comparative lightweight. Its power-to-weight ratio relative to the V-6 versions of the America muscle coupes is pretty close – and this is reflected in the comparable 0-60 times (not counting vs. the V-8 versions of Camaro, Mustang and Challenger of course).

The American muscle coupes are big, heavy cars – and they feel it. They are thunderous in a straight line but more of a handful in the curves, especially if you’re not used to wrestling with a hulking, high-powered but still two-ton-plus American muscle car.

The Genesis is more user-friendy and agile-feeling, factors that can be credited to its smaller size and much lower curb weight. It also has better lines of sight, especially compared to the Camaro – which looks cool on the outside but has atrocious blind spots because of its chopped roof and steeply raked/short glass.

There’s also value to consider. For $24,500 (only about $2k more than the cost of the base model V-6 Camaro and Mustang) you can get a Genesis 2.0 coupe with the optional R-Spec package that includes pretty serious performance equipment like 19-inch rims with ultra-performance summer tires, high-capacity Brembo brakes, limited slip rear axle, firm-ride suspension and several exterior/interior enhancements. This package also includes manual adjusters to tailor front-end camber to you tastes.

Adding the much more powerful V-6 to the deal makes it even sweeter. No, it won’t beat a Mustang GT, Camaro SS or Challenger R/T in the quarter mile. But it’ll be right on their heels and when the road gets twisty, things will even up fast.

V-6 versions of the Genesis accelerate strongly, sound really good and handle just as well as the four-cylinder versions. When Hyundai offers the 4.6 liter, 368 hp V-8 that’s currently available in the Genesis sedan, it will have a superior power to weight ratio than the Mustang GT, Camaro SS and Challenger R/T – and ought to be at least as quick, if not quicker.

Looks are a point of clear departure for the Genesis relative to the traditional American muscle coupe. Though its layout is very similar to Camaro, Mustang and Challenger, it’s not nearly as mean-looking as they are – and it’s physically a smaller car. At 182.3 inches long, it is six inches shorter, nose to tail, than the next-longest Mustang at 188.1 inches – and more than a foot shorter than the absolutely huge Dodge Challenger at 197.7 inches.

If you don’t know what it is, you’d probably assume it’s another FWD sport compact – maybe an updated version of the Tibby – instead of Hyundai’s first stab at building a real-wheel-drive muscle car. This was probably inevitable since neither the Genesis nor Hyundai have any history to fall back on – or retro styling cues to recall.

Genesis – as its name implies – is the start of something new.

Some buyers may like this; others not so much. The Genesis runs a much lower profile than the Heroes of the Drive Thru – who are all about getting noticed. That’s great if you want everyone looking at you (cops included) but not so great if you don’t. It’s also possible that because the Genesis doesn’t have the decades-long bad boy rep that comes with Camaro, Mustang or Challenger, its cost to insure may be less.

Size also matters when it comes to cabin space.

Despite its more compact outside dimensions, the Genesis has about two inches more front seat legroom (44.1 inches) than the much larger on the outside – and much heavier – Dodge Challenger (42.4 inches) and close to two inches more front seat headroom than the chop-roofed Chevy Camaro (39.2 inches for the Hyundai vs. 37.4 for the Camaro). I love the Camaro, but it’s not the most livable car if you’re over six feet tall. The Genesis, meanwhile, is easy to get into and out – and comfortable to be in – even if you’re well over six feet tall.

Back seat space in all these cars is limited – it’s the nature of the beast – but surprisingly, the smaller-on-the-outside Genesis has about the same back seat head/legroom as its main competition. Only the Challenger has significantly more rear legroom (32.6 inches vs. 30.3 inches for the Genesis). And the Hyundai actually has slightly more backseat legroom than either Mustang (29.8 inches) or Camaro (29.9 inches).

Pretty much the only size-related area where the Genesis comes up short is trunk room, with just 10 cubic feet vs. 16.2 for the class-leading Challenger. But Camaro and Mustang only have marginally larger trunks than Genesis – 11.3 cubic feet and 13.4 cubic feet, respectively.

None of these cars are made for carrying more than two adults comfortably – or carrying much with you in the trunk. And their rear-drive layout means they are iffy in the snow – worthless, if they’re riding on high-performance “summer” tires.

Unlike most current-year cars, the Genesis has frameless door glass – and while it seals well and helps the car feel less closed-in, there is some shudder when you pull the door closed with the glass up.

To the right of the very straightforward main gauge cluster – large speedo and tachometer with large, highly legible fonts – is a kind of hokey engine torque output meter, plus a bar graph “instant” fuel economy readout that frequently reads out a very optimistic 50-plus MPGs. I’d rather have seen a set of useful accessory gauges, such as one for oil pressure and another for oil temperature.

Gadget-wise, Genesis can be ordered with touch-screen navigation and Bluetooth as well as a premium Infinity audio system with music storage hard drive.

There’s also an iPod pigtail in the center console.

As a brand-new model, it is impossible to judge the Hyundai’s prospective long-term reliability directly. But indirectly, one can feel confident in it because all recent Hyundais have proved to be well-built and problem-free as judged by the number of recalls and consumer complaints – which have been few. It certainly appears to be well-built, with no obvious corner cutting or evidence of slipshod construction (which you can’t say about the appallingly slapped-together Challenger).

At the time this review was written, crash test scores were not available.

Hyundai’s clearly gunning for the big boys – whose unchallenged hold on the last remaining American-only corner of the marketplace may be about to end. 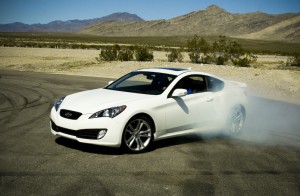