Back in 1970, the Dodge Challenger was rougher around the edges than the Chevy Camaro and Ford Mustang. It came to the game a few years late; it was heavier and didn’t handle quite as well. But it made up for its deficits with its outsized personality, heroic engines and brutal straight-line performance. 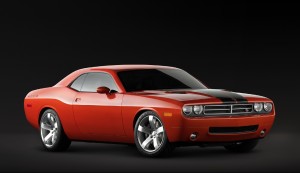 Bit when it comes to balls, nothing can touch the Challenger – then or now.

Challenger is a significantly bigger car than its two main competitors, the Camaro and Mustang – with usable (for people) rear seats.

All current versions are hardtop coupes but a convertible is on deck (reportedly)  for summer 2011.

The top-of-the-line SRT8 gets a new, larger version of the famous Hemi V-8, with power bootsed to 475 hp.

New 3.6 liter V-6 is a godsend that makes base SE coupe a player.

Reincarnates the audaciousness of the original early ’70s Challenger – along with even fiercer performance than the old 440 Magnum and even the legendary 426 cubic-inch Street Hemi big blocks of that era delivered.

It’s huge. The Challenger’s near 17 cubic-foot trunk is bigger than many current mid-sized family sedans’ trunks.

Back seats are actually viable for transporting adult humans – unlike smaller Camaro and Mustang’s for-looks-only back seats.

Chrysler itself is iffy – and may not be in bidness a few years from now, if people don’t buy lots of Fiats.

Three engines are available in the ’11 Challenger, one V-6 and two versions of Chrysler’s Hemi V-8.

Zero to 60 runs now take about 7.1 seconds – not as quick as Mustang or Camaro, but much quicker than the previous base model Challenger with the 3.5 liter engine (about 8 seconds flat) and certainly respectable enough to be in line with the car’s image.

The bad news is that the Challenger’s new V-6 comes teamed only with a five-speed automatic. At least, initially. Chevy and Ford both let you have a manual transmission – a six speed manual – with their V-6s. 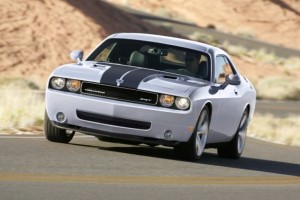 And their optional automatics are six-speeds, too.

Why is Dodge always playing catch-up?

Challenger R/T is powered by a 5.7 liter V-8, Chrysler’s famous Hemi – tuned up a bit to 379 hp (if you order the five-speed Tremec manual transmission; automatic-equipped Hemi Challengers are rated at 372 hp).

Both the Chevy and Ford are several hundred pounds lighter, too.

Then there’s the top-of-the-line SRT8 – and some extremely happy news for Moparians.

For 2011, the SRT8 gets a hogged-out 6.4 liter version of the Hemi that produces 475 hp – making this model the strongest of the three latter day muscle cars.

And not by a hair, either.

Even with more weight to carry, acceleration is seriously antisocial: Expect  zero to 60 in the mid 4 second range – and very frequent tire changes.

The Hemi V-8 is available with Chrysler’s cylinder deactivation technology – which helps fuel economy a little bit. But even with the assistance of modern technology, the V-8 Challenger drinks gas just like a classic 1970 Challenger: The R/T rates 16 MPGs in the city. Highway mileage, though, is better at a possible 25 mpg.

The SRT8 is even thirstier, of course. EPA ratings weren’t available at the time of this review, but expect city mileage to be high single digits, maybe 11-12 or so, in normal, real-world use.

Both versions of the Hemi V-8 require premium fuel but the V-6 can drink regular unleaded.

The base car with the V-6 is now a decent choice.

Previously it was a toothless tiger that looked tough but couldn’t even do a burnout unless you power braked it. A Camry V-6 could smoke it.

Now it will run with the Camaro and Mustang V-6s.

It’s just too bad it’s still playing catch-up by not having a manual transmission.

The R/T and SRT8 definitely deliver the goods, though.

As the owner of a ’70s-era muscle car (a Pontiac Trans-Am with a 7.4 liter 455 V-8) I felt right at home. Same big bruiser/Nextel Cup stock car feel. The engine throbs, the gearshift vibrates. Acres of steel. You feel as invincible as the commander of a King Tiger tank stomping through a Russian village in the summer of 1943.

Mustang and Camaro are fun, but they can’t match the Challenger’s ironheaded brutality. It is a four-wheeled .44 Magnum, the Most Powerful Handgun in the Whole World.

And it will take your head clean off.

Push the traction control “off” button and tickle the gas; the rear tires vaporize in a haze of blue smoke at anything more than half-down. Push down all the way and the rear end will slide sideways; don’t be afraid! Keep your foot in it! Crank the wheel hard in the opposite direction! Shift! Everybody else, get the hell out of the way.

And that’s just the R/T.

If you grew up with big American muscle coupes and remember them like your first girlfriend, you will fall in love  with the Challenger.

The Challenger is a sled.

If you were born after 1980 and grew up with compact-sized FWD imports, the linebacker massiveness of the Challenger will probably take a little getting used to. But you’ll soon see what all the guys who were lucky enough to have been around when cars like the Challenger were the rule instead of the exception got to play with when they were young.

The only downside to all this is handling. Barreling down the highway with the Hemi singing is muscle car Nirvana. You are king of the road. But the car’s proportions and its weight do clip its ability to corner like a sports coupe – which to be fair, it really isn’t.

The Challenger is basically a redneck GT; an Aston Martin Vantage for the Bruce Springsteen set.

No one does it better. 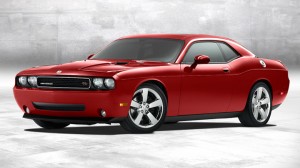 Ford has done a really nice job incorporating retro styling elements to the new Mustang – and the new Camaro does a fine job of hinting at the ’69 – but the 2011 Challenger actually looks like it teleported here in one piece from the early Nixon Years.

There aren’t just hints and echoes of the original 1970 Challenger. The new Challenger could easily be mistaken for a meticulously restored ’70 Challenger from 20 yards away – especially if you order yours in one of the available day-glo colors with the optional stripe and decal packages – and add a set of black louvers to the rear glass.

It has the same arrogant squat and hungry-looking front end with deep-set hooded headlights and prominent chin spoiler, up-arched rear quarters and twin-scooped hood as the original car did.

Somehow, Chrysler designers managed this insolent re-creation while also complying with all the federal government’s bumper-impact and crashworthiness rigmarole – which may be a boon for safety but which make it very difficult to bring non-standard shapes to production.

Inside, meanwhile, Dodge has at least tried to put some more distance between the Challenger and its parent car, the Charger sedan. There is still a lot of commonality, unfortunately. Both cars share the same basic dashpad/gauge layout/look. It isn’t bad, just bland – given the rest of the car. It doesn’t mesh with the wild child exterior – or match the retro coolness of the interiors of its competition. There is a new three-spoke steering wheel, which is a noticeable and significant improvement. Still, the Challenger’s interior – at least in so far as looks go – is not up to the turn-back-time standard set by Camaro and Mustang.

But, there is an upside – space.

As mentioned earlier, the Challenger is a lunker of a car. It has much bigger trunk – 16.2 cubic feet – than either the Camaro (11.3 cubic feet) or the Mustang (13.4 cubic feet) as well as actually usable rear seats, which you won’t find in either the Ford or the Chevy.

Dodge advertises the Challenger as five-person capable and while that may be stretch, four adults can definitely ride in one. That’s impossible in either Camaro and Mustang, where the back seats are at best usable for young children and overflow cargo you couldn’t squeeze into the trunk.

The Dodge has 32.6 inches of backseat legroom vs. 29.8 for the Mustang and 29.9 for Camaro. There’s also two-plus inches more headroom in the Challenger’s backseat area.

This roominess – pus the car’s visual impact and retro-historical appeal – are probably its biggest assets, even more so than its 0-60 and 1/4 mile times. The useable back seats make it a plausibly practical car for people with kids. And the spacious front seats (again, significantly more headroom vs. the competition) make it more comfortable for bigger (and less flexible) people like the typical over-40s who are probably the most likely people to lust after one of these trips down Memory Lane – and able to afford one, too.

The fastback rear glass somewhat limits rearward vision – and there is a little bit of a blind spot at the B pillar near the rear quarter glass. But bottom line, the Challenger looks great from any angle and as with the car’s outsized proportions, you quickly get used to the minor visibility issues.

Seat patterns, the canted toward the driver center console and the trapezoidal shape of the dashpad also echo the early ’70s – though modernity shows through in the form of the optional LCD display for the GPS/audio system (with MyGIG music hard drive) as well as the air bag-equipped steering wheel and Bluetooth wireless connectivity.

There is another area where the Challenger reminded me of the 1970s.

When I opened the trunk of my test car, I saw some fairly crude-looking assembly work – specifically, where the rear quarter panels meet up with the trunk shell. Dimpled spot welds and slathered on body sealer at the join points. None of it was clear-coated, either. Several car companies don’t clear coat the door jambs, under the hood and trunk – in order to save a few bucks per car.

It doesn’t hurt anything, but it does look cheap.

The Frankenstinian welding/joining, though, really surprised me. I haven’t seen anything like it on a production car in close to 20 years now of test-driving new cars. Like the absence of clear-coating on not-visible panels, it’s probably not a functional issue – but it implies serious penny pinching and possibly, slapdash assembly. You would never in a million years see this kind of thing on a current (or even recent) Japanese or European car.

Or for that matter, even a current GM or Ford car.

Prospective buyers who see this may react badly.

The rest of the car seemed ok – and Dodge’s powertrains ( especially the V-8s) have a good rep for quality and basic soundness of design. The heavy-duty muscle car underpinnings should prove tough and durable, too.

The car’s sheer size and mass confer a safety advantage, even without the air bags and ABS and all the rest of it. Like its forbears, this 4,000 pound-plus hunka burnin’ love would accordionize a Honda Civic with only a few scuffs on the bumper to show for the encounter.

The one major worry, of course, is the future of the company that makes this car. Fiat is bankrolling Chrysler now, but it faces the forbidding challenge of building up a presence in this market from literally nothing at a time when the economy is worse than it has been in 30 years or more.

If Fiat pulls out, Chrysler’s a goner.

And Challenger owners may lose dealer support/service/ready access to parts.

The Mustang and Camaro are better all-arounders but no one’s got bigger balls than the Challenger. 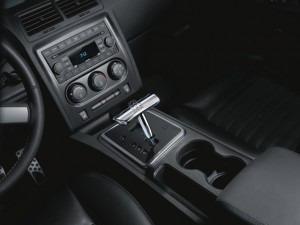