The Dodge Nitro isn’t a favorite of car journalists.

Google reviews of this chunky little SUV and you’ll see it gets slammed a lot. It has a silly name (ok, fair enough). It’s got “vague steering” and “trucky handling.”

But that’s because it is trucky – unlike virtually all the car-based, light-duty “crossovers” out there masquerading as 4WD SUVs.

The Nitro may have a silly name but at least it can back up the macho pose with legitimate off-road capability, including real 4WD (not light-duty, car-based AWD) with Low range gearing.

The Nitro’s also priced about $1,000 less (to start) than the Jeep Liberty it’s based on – and it but offers a stronger optional 4.0 liter V-6 that’s not available in the Jeep.

Hey, that’s at least two things in its favor!

The Nitro is a five-passenger compact SUV based on its corporate cousin, the Jeep Liberty. It comes in rear-drive and four-wheel-drive versions, with one of two available V-6 engines.

Yes, the names are a bit much.

Very little. Chrysler won’t have much in the way of significant new metal until the 2012 model year. So the ’11 Nitro is pretty much a carryover – with a small uptick in price and a few tweaks added here and there, such as an automatic fuel-shutoff feature during deceleration (to boost gas mileage slightly) for the standard 3.7 liter V-6 and standard heated outside rearview mirrors on all trims.

The performance-minded R/T package was dropped a year ago, but Nitro still offers as optional equipment a 260 hp, 4.0 liter engine that’s considerably stronger than the 3.7 liter, 210 hp V-6 that’s the only engine available in the Jeep Liberty.

The Nitro can be equipped with a 260 hp 4.0 liter V-6 that’s not even offered in the Liberty as an option – and it still costs less than the Jeep when so equipped.

The Nitro is a real-deal 4WD with Low range gearing and a sturdy, truck-type frame/suspension that can handle the abuse of off-road driving.

It can tow 5,000 pounds – much more than most light-duty, car-based “crossover SUV” pretenders.

Bet you can pick one up real cheap.

The critics are right: It doesn’t handle like a sports car. It handles like a truck – because it has truck-type underpinnings.

It’s also a Dodge – and that means big-time depreciation, due to the precarious state of parent company Chrysler Corp. (now a subsidiary of Fiat).

Resale/trade-in values are likely to be horrible, but this may not matter to you if you plan on driving your Nitro until the wheels fall off.

Ghettomobile 20-inch wheel-tire packages that are a bad idea for off-road/bad weather driving.

Base and mid-trim Nitros come with Dodge’s long-serving 3.7 liter, 210 hp V-6. It is teamed with a four-speed automatic and rear-wheel-drive.

This engine returns about 16 MPGs city and 22 mpg highway, with a 0-60 time of about 9.4-9.6 seconds, depending on whether you’ve got 2WD or 4WD (heavier 4WD versions are slightly slower).

When you let off the gas pedal, you’ll see a little green “Eco” light come on. That’s telling you the fuel shutoff feature is engaged. Other than the light, the system’s operation is undetectable.

But so is the difference in fuel economy.

Top-of-the-line Detonator and Shock trims get a much stronger 4.0 liter, 260 hp V-6 and a more modern five-speed automatic. Performance with this engine is significantly better, with a 0-60 time of 7.5-7.7 seconds, again depending on whether you go 4WD or 2WD.

Gas mileage is virtually the same as with the 3.7 liter engine, despite the much higher horsepower: 16 city, 20 highway. So, other than up-front price, there’s no real advantage to be gained by choosing the smaller V-6.

The Nitro does have a heavy, solid feel to it – like the critics say. In other words, it rides and drives like an SUV – a real SUV. That doesn’t mean the ride is harsh or bouncy (it’s not). Nor that it handles poorly – for what it is, driven with respect for what it is.

It just means there’s no pretense made at being a high-performance sport sedan – which seems to be what the automotive press demands of every vehicle on the road. Driven within reasonable bounds – take curves within 5 mph or so of the posted speed limit – and the Nitro’s stable, doesn’t feel tipsy and pretty much goes where you want it to go, like any other car.

What it won’t do is take high-speed corners like it’s on rails – and if you try to drive it at 80 mph zig-zagging through traffic you’ll probably end up barrel-rolling into a ditch. But do you drive that aggressively?

And if you do, why would you buy a truck-based 4WD SUV for such work?

If you want high-performance, high-speed handling, get a sport sedan – or one of the many “crossovers” on the market that’s built to be driven like a sport sedan but which is useless off-road and can’t tow squat.

But if you want an SUV – a real one, that can handle off-road driving as well as pull serious weight – then the Nitro may have what you are looking for.

The main driving-related/functional weakness of the Nitro relative to the two competitor vehicles most similar to it – the Nissan Xterra and the Toyota FJ Cruiser – is that Dodge doesn’t offer a manual transmission with either the 3.7 liter or the 4.0 liter engine. You can get a six-speed manual in both the Nissan and the Toyota while the Nitro comes only with a dated four-speed automatic (with the 3.7 liter engine) or five-speed automatic (with the optional 4.0 liter engine).

A manual would make the Nitro – especially models with the standard 3.7 liter V-6 – more fun to drive.

The other thing is, tires. Dodge fits the Nitro with some massive wheels  – including up to 20-inchers – fitted with tires that are about as knobby as Mussolini’s head. Which is fine if you want a ghettowagon, but absolutely worthless for real work, especially off-road work.

Jeep, meanwhile, offers some aggressive knobby-style M/S-rated wheel and tire packages on the basically identical Liberty – along with a greater abundance off-road hardware, such as skid plates and so on.

But you could take the money you save up-front on the Nitro’s substantially lower MSRP sticker price and fit it with similar equipment, including knobby off-road tires, and have the same off-road tenacity as the Liberty – with the superior power/performance of the Nitro’s bigger, stronger 4.0 engine.

A set of new tires can be easily and relatively inexpensively added to the Nitro. But you can’t add the 4.0 six to the Liberty

At least, not easily – or inexpensively.

The Nitro has chunky exterior styling – sort of like a kid’s Tonka truck toy in full scale. But at least it looks like an SUV and not another melted-in-the-microwave, jellybean-looking, minivan-esque “crossover.”

An interesting – because unusual – feature is the Nitro’s old-school push-button exterior door locks. Almost all new vehicles have pull-up/out handles of one sort or another. The Nitro has fixed handles with a thumb button you push in to release the lock – the way it used to be on almost all cars 30 years ago. I kind of like it. It feels sturdy and just goes with the rest of the Nitro’s macho look.

The rear seat folds and reclines but the Load ‘n Go sliding trunk floor that was offered previously in the discontinued R/T has been dropped along with the R/T package itself. That was a neat feature and it should have been retained.

The optional seat heaters are really excellent. They get hot – not merely tepid. Feels great on a cold day.

Plenty of leg/head/knee room in both first and second row seats for a guy my size – 6 ft 3 and 210 pounds. Even in the second row, there was still several inches between my knees and the front seatbacks.

That’s excellent for a compact SUV.

Critics slam the Nitro’s interior for its use of hard plastics and for not being as luxurious as what you’d find in “upscale crossovers” – but again, the Nitro is not trying to be an upscale crossover and shouldn’t be compared to them. Cross-shop it against functionally similar real-deal SUVs such as the Xterra and FJ Cruiser. All of them have hard plastic interiors – and that’s what you’d want in a vehicle that might actually get dirty.

Yeah, the Nitro’s plastics are on the cheapy looking side. But so is the price. And you can bet you’ll pay less than MSRP for one, too. Good luck trying that with an FJ or Xterra.

If you want, you can add leather, a sunroof and other luxury upgrades. Hard-drive based GPS/compass, Bluetooth wireless and a premium 8-speaker stereo can be ordered as well.

The Nitro’s got lots of room for stuff – 76 cubic feet – which is a solid ten cubes more than the Xterra’s 66 cubic feet and the FJ’s 67 cubic feet. And its boxy/tall shape helps make the most real-world use of the available space, too.

In the cargo area, there’s a large secure/covered storage cubby built into the floor you can use to hide items away from prying eyes. There are multiple tie-down points, too, which can be a real help securing cargo you don’t want moving around.

The 5,000 pound max tow rating (same as Xterra and FJ) means the Nitro can pull more than just a little trailer. You could tow another vehicle – something none of the light-duty “crossovers” could deal with (at least, not without voiding the warranty or possibly burning up the transmission).

The future of Chrysler Corp. is the still a Big Unknown that is driving down the out-the-door costs of current Chrysler/Dodge models (good for consumers) and also likely to act like an anchor strapped to the back of Wiley Coyote swan-diving off the edge of a cliff as far as Nitro resale values go.

You could take a bath in three or four years from now at trade-in time. But if you plan to drive your next new vehicle until the wheels fall of, then resale/depreciation stuff is irrelevant – and the savings up front can be a huge attraction.

Quality/durability-wise, the automotive press has nit-picked minor stuff such as the Nitro’s less-than-Lexus fit and finish. For example, the exposed joints when you open the doors/liftgate in the rear are not clear-coated and look dull. Fair enough, if that matters hugely to you. But the functional stuff – including the Nitro’s 3.7 and 4.0 liter V-6 engines – have proved to be pretty solid overall. And the simple, tough layout (including solid rear axle suspension) should require nothing from you for the useful service life of the vehicle.

The optional 4WD system is arguably a major safety feature in its own right – in particular relative to the light-duty, car-based all-wheel-drive (AWD) systems found in crossover SUVs. The Nitro’s Low range gearing could save your bacon in conditions (deep snow/mud) that would leave an AWD crossover stuck and out of luck.

There is an old-school pull-up parking brake lever – which I like because if you ever need to use it in an emergency situation (such as the main brakes failing on you), you can control how much braking force is applied much better than you could with a foot-actuated parking brake.

I think pull-up parking brake levers should be standard equipment in all cars.

If you like the Jeep Liberty but would like more engine – or maybe a value-priced alternative to the Nissan XTerra or Toyota FJ with similar 4WD credentials – the Nitro could be worth considering. 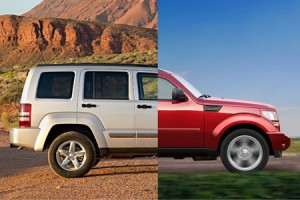