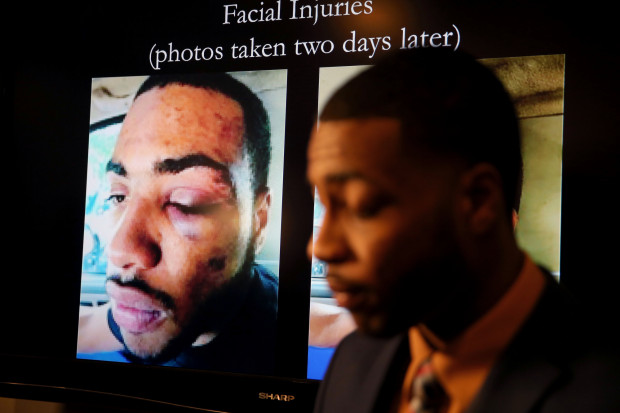 Well, here’s another one…

In Pasadena, CA some “heroes” (aka, law enforcers) noticed a motorist driving a car with windows that were tinted “too much” and which was missing its front license plate. These are heinous offenses against the peace, you see. Can’t that let that go.

A stop was initiated.

Which quickly led to a violent beat down of the unarmed, unresisting motorist:

The “heroes” beat the man – 21-year-old Christopher Ballew – bloody and broke his leg, later claiming that Ballew’s attempts to ward off the beatdown constituted “resisting” and “assault upon a peace officer.”

Bellew was the peaceful party here. He wasn’t accosting anyone or even looking at them cross-eyed. Nonetheless, he found himself being accosted by a gaggle of armed government workers, who were (and are) anything but “peace officers.” 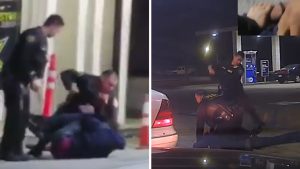 If they had been peace officers – as opposed to law enforcers – they’d have left Bellew in peace. Instead, they savagely beat him, until he was literally bloody and broken, lying facedown in the road, pleading for them to stop  . . . all to the accompaniment of shouted obscenities.

All this happened over something that should never have happened. The initial stop being an affront to anyone who thinks people shouldn’t be stopped – much less violently assaulted – for not causing any harm to anyone.

Who is harmed by “too much” window tint? It is illegal, certainly.

Shouldn’t right or wrong be the criteria for leaving people in peace – or not? This business of enforcing the law – right or wrong – to the nth degree is the ne plus ultra definition of a police state. The official, commonplace cruelty. The screaming demand for immediate submission – the blows raining down even before the baffled, terrified victim has had  chance to process the shrieks.

The absence of any meaningful recourse – and few if any repercussions.

It is the antithesis of a decent, civilized state. Which is one in which people are not subjected to violent assaults for no reason except that they have transgressed some arbitrary edict and thus given the state’s bully boys the excuse to administer violent assaults. What we see in this video no longer happens in Russia. It may still happen in North Korea.

This is what’s become of America. 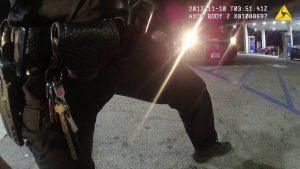 Meanwhile, the “heroes” administering the beatdown tint the windows of their vehicles opaque. Why should it be an offense for us to tint our windows just as much? So that “heroes” can see into our cars more easily? Why should we be subject to that? Isn’t it exactly the same thing as a demand – probably coming – that we never shutter the windows to our homes, because doing so makes it harder for a law enforcer to see inside?

How is anyone harmed by a car not having a front license plate? Is it not enough to have one? What is the affront to the public safety?

Or is the requirement that we have two plates, one front and another rear, merely a means for “heroes” to more easily hurt us again? This time by making it easier to extract money from us over other harming-no-one actions such as driving faster than an arbitrarily decreed number posted on a sign – posted such that almost every driver is likely to be “guilty” of driving faster?

Meanwhile, as everyone knows, “heroes” routinely exceed the speed limit – which applies to us without exception but to them as they please.

Regardless, no one should be subject to a beatdown over such trivial offense as “too much” window tint and the absence of a front license plate.

No one who lives in a free country, that is. Or even a decent one.

America, unfortunately, is no longer either.

How They’ll Take Your Citizenship