A solid-running used car – a paid-for car – is almost as good as gold these days. Unlike new cars – whose value drops almost as soon as you sign the paperwork – the value of used cars is actually going up. Market demand for them is higher than it’s been in decades.

Part of the reason for this is last year’s “Cash for Clunkers” program, which crushed hundreds of thousands of perfectly good older cars – driving up the prices of those remaining. The other reason is that people  have figured out that pretty much any car built in the modern era (1990s-up) is a good bet to run 200,00 or more miles with decent care, so it’s stupid to sign up for a new payment plan every 5-6 years, as was the usual thing to do before the ’90s. Throw in a FUBAR economy, with an admitted 10 percent unemployment rate (and a 20 percent real unemployment rate), a scared (or broke or both) middle class and it’s easy to understand why people are holding on to “old faithful” as long as they can.

But how long is too long?

The simple answer is:  after the point at which it costs more to keep it than it would to replace it.

Owning an older, paid-for car can save you a pile of money in the form of lower insurance and personal property taxes. People sometimes forget this when they decide to buy a new car, mainly because insurance and personal property taxes aren’t included in the car’s sticker price or its monthly payments. But you have to pay up just the same. In states that have personal property taxes on motor vehicles, the annual hit can be as much as several hundred dollars (or more) annually, for years – until the car has lost enough value to cut the tax rate down to  a less obnoxious burden. This typically takes at least eight years, fyi. (I am still forking over $120 annually to my county in Virginia on a 1998 model year pick-up I own. Imagine what the tax rate would be on a brand-new, 2011 model truck.) Over five or six years, you might have to cough up $2,000 in property taxes on a new car purchase. That would pay for a new transmission or clutch job for your current older car. Just something to consider.

Insurance is the other bogey. If you buy a new car and don’t pay for it cash-in-full, you must carry a full-coverage, comprehensive insurance policy. (And even if you do pay for the car in full, up front, you probably will still want a comprehensive policy). Depending on where you live, and the type of car you’ve bought, the cost of a full-coverage policy can easily top $2,000 annually.  And may the Motor Gods protect you if you have more than a ticket or two on your DMV rap sheet.  Over the typical 5-6 year new car loan period, you might end up paying $6,000 for insurance alone. Think about that. You could have bought a decent 4-5 year old economy car for that. Or covered your entire gas bill for the same period.

On the other hand, if you drive an older car, not only will the insurance costs be lower (often, much lower) but you have the option of going with a basic, liability-only policy that might cost as little as $200 or so annually (assuming you have a “good” driving record). Over 5-6 years, that amounts to a pretty large chunk of cash you just saved yourself.

Keep in mind, too, that insurance companies are scum. If someone hits you – no fault of yours – and your car is totaled out as a result  – expect to get a lowballed settlement offer that’s nowhere near the replacement cost of your smashed-up car. People who think insurance means they make you whole after an incident often get a rude awakening when they file a claim, even if they’ve been faithfully paying money to the insurance company for years.

Buy a new car and it will lose about 30 percent of its value during the first three years of its life. Then it hits a plateau. It still loses value, but at a lesser rate. The rate picks up again after about 6-7 years, by which time it’s (on average) going to be worth about half what it cost new. Then, another plateau. The final big drop happens around year 10, maybe because for psychological reasons, people view a double-digit car as an “old” car. So, if you don’t want to keep it for another few years at least  – and want to get the max value out of what’s left of its hide – consider trading or selling before it hits the decade mark.

* A guaranteed monthly payment vs. the possibility of occasional (and potentially large) unexpected repair bills –

Once a new car is out of warranty – especially its powertrain or extended warranty – you face the Russian roulette of dealing with the possibility of large unexpected expenses from that day forward. The older the car – and the higher the mileage – the more the odds stack up against you that, eventually, something’s going to break or require potentially costly service.

Some cars are better-built – and so inherently more reliable, for longer periods of time – than others. (Checking sources like Consumer Reports, JD Power customer satisfaction rankings and government recall data will give you a good feel for which cars have the best – and worst – track records.) But just as people get creaky as they age, even the best-engineered, best-cared-for car will eventually wear out. Or more accurately, it will get to the point where it begins to nickel and dime you into the po’ house.

If you keep track of how much money you’re putting into your car for upkeep, you’ll be able to notice trends that can serve as the hint it’s time to begin thinking about a new car – hopefully, before the old one suffers a major breakdown, such as a dead transmission. You don’t want to find yourself in the catch-22 position of having to put more money into the car than it might be worth – and without increasing its value significantly after having done so. Looked at another way, spending $2,500 to fix an older car is the equivalent of more than six months’ worth of $350 per month new car payments. Instead of nursing an old beater that could suffer another breakdown at any moment, you could be driving a new – and fully warranted – vehicle.

Related to the above is your willingness to deal with more frequent trips to the shop – not just for unexpected repairs, but for ever more frequent preventive upkeep and maintenance. The farther you get from the day you drove off the dealer’s lot, the more often you’ll find yourself coming back for service. And paying for things like brake jobs, new tires, clutches, CV joints, struts, etc.

Everything from new batteries and tires to fairly big and involved jobs such as timing belt replacement are hassles and expenses you can avoid entirely if you trade-in once every five years or so. For some people, the higher costs associated with buying a new car more frequently are worth it – if it means dodging the time and expense spent at tire stores, brake shops and the dealer.

This last criteria is the least objective – but it’s no less important in terms of deciding when to ditch your ride. Some people are perfectly content to drive a car that’s obviously older – so long as it still runs well (and is paid-for). Most Americans, however, have a lot of their personal image wrapped up in their wheels. And there are people in professions – such as real estate – where it’s important and even necessary  to be seen in a car that looks new and sharp.

It comes down to what you want as much as what you need. Hopefully this discussion will have helped you strike a balance between the two. 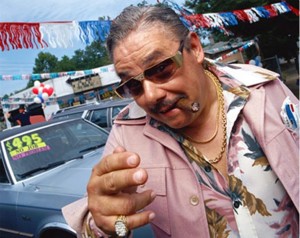