Racial profiling is a law-enforcement no-no, but “automotive profiling” is a going concern in every state across the land.

Drive a bright-colored car, or an obviously sporty/performance car, and you dramatically increase your chances of being issued a piece of payin’ paper  – because your car stands out from the crowd.

Most speed traps involve a stationary patrol car and a radar gun. And radar (unlike laser detection) can’t single out a particular car in a pack of fast-moving vehicles. It’s up to the cop to choose which vehicle he’s going to go after. Nine times out of ten, it isn’t going to be the off-white minivan to your left or the silver pick-up on your right. It’s gonna be you, amigo – if you’re the pilot of a cherry red Mustang GT or glistening black Escalade with chromed to the max 20-inch ree-uhms.

And not only are you more likely to be pulled over if you’re driving a high-visibility car, you’re also more likely to feel the full extent of the law as well. The family-looking dude doing 64 in a 55 in his schleprock-looking Camry stands a decent chance of getting  off with just a warning. Or the cop  maybe knocks the ticket down to 60. But the young kid in the winged-up, fart-can equipped EVO doing exactly the same thing can expect to be written up for every single MPH the cop can throw at him – with maybe a seatbelt violation tossed in for good measure.

The cop is going to assume you’re a Regular Violator – and use this opportunity to chew on you a bit. It’s not unlike the difference in treatment you know you’ll get if you apply for a loan dressed like Bob Marley vs. one of the suits from “Mad Men.”

* Avoid driving a car with a big wing on the trunk – or an oversized/overload exhaust.

They draw the attention of cops like a Night Train sale at 7-11 draws winos. On cars like the Mustang GT, you can “delete option” the rear spoiler. Or just delete it yourself. Most unbolt in minutes and the truth is they serve no meaningful function on a street car anyhow. It’s just for show – and if you’re smart and want to actually use your machine, showing is the last thing you should want to do.

They make you more visible – especially when moving fast relative to traffic. Silvers, greys and dark greens help you fade into the pack. There is a reason why unmarked cop cars are typically painted one of those color. It’s camouflage. If you don’t get noticed – or don’t get noticed first – the chances of getting tagged with a ticket drop significantly.

Two-door cars say “I’m a fast driver” to a cop; they also tend to cost more to insure – because insurance companies assume (based on accident statistics) that people who own two-door cars tend to drive faster than people who own four-door cars. Cops just don’t pay as much attention to a bland-colored, nothing-special-looking four door – even if happens to a 150-mph capable four door.

You may feel older driving a car with less obvious attitude – but you’ll be hassled less by the Man. 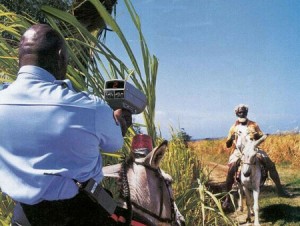