Ok, it’s nothing much to look at – and let’s be honest, nothing special to drive, either.

But the Toyota Corolla has the one thing that matters most to literally millions of consumers: a reputation for being the best-built, most long-haul reliable economy sled on the road.

And that’s no small thing.

The Corolla is Toyota’s entry-level economy sedan. It’s also the best-selling car of all time, eclipsing both the VW Beetle (old model) and the Model T Ford.

It competes against other compact economy sedans like the Ford Fiesta, Hyundai Accent and Honda Civic, among others.

Stability control is now standard equipment on all Corollas.

You pay more up front for those higher down the road resale values.

Not much in the way of personality; a transportation appliance.

The Corolla is intended to be an economy car more than anything else, so it comes standard with an efficiency-minded 1.8 liter engine that produces 132 hp. This engine is available with either a five-speed manual transmission or (optionally) a four-speed automatic.

The little Toyota takes just over 10 seconds flat to get to 60 mph, about the same as a Prius hybrid.

Gas mileage is very good: EPA rates the Corolla at 26 mpg in city driving and 35 mpg on the highway.

An optional 2.4 liter, 158 hp engine is available as part of an XRS sport package. This engine also comes with either a five-speed manual transmission or an automatic (a five-speed, upgraded over the base car’s four-speed).

The Corolla XRS gets to 60 mph about a second sooner, but you pay a price at the pump (as well as up front) for the improved performance: EPA rates the XRS Corolla at 22 mpg city and 30 mpg highway.

One of the reasons the Corolla’s so popular is its exceptionally good fuel economy. You may actually do better than the EPA ratings.

First day I had the car, I drove it from my house to a hiking trailhead about 35 miles distant – and back. The gas gauge hadn’t budged from “full” by the time I got home. It still read “full” after another, similar out and back trip. By mid-week, I had put close to 200 miles on the car and the gauge read just under three-quarters full.

And I do not drive gently.

If you do drive gently, close to 40 mpg should be possible in this car – which is very close to what a Honda Insight (or a Toyota Prius) hybrid returns in average, real-world driving. But the Corolla costs eight to ten grand less to buy – which works out to five-six years of “free” gas – plus it’s got a simple, reliable conventional four-cylinder engine that should have 200,000 miles or more of reliable service in it – vs. the hybrid’s complex, expensive electrical systems (and battery) that will likely require wallet-draining service long before 200,000 miles rolls around.

Ok, it’s not as precise-handling as a Honda Civic or a VW Golf. Most Corolla buyers won’t notice or care. It steers, handles and stops predictably, easily and comfortably. That’s really all that matters to most potential buyers.

The fifteen-inch steel wheels and all-season tires give a quiet, smooth ride and those steel wheels will last forever (unlike easily damaged alloy rims) while the all-season rubber should take you 40,000 miles or more before it’s time for a fresh set.

If you want a bit more zip, there’s an S package that adds 16-inch wheels, plus firmer suspension settings; or you can go up to the XRS, with its larger engine.

But the as-it-sits base trim Corolla is the one that makes the most sense, since it’s not trying to be something it really isn’t.

There are no surprises here – just a good, solid, placid little sedan that gets you where you want to go without any hassles or excess expense.

Corollas are everywhere – so no one’s going to notice your unless you give it a flame paint job or tack a huge wing on the trunk. But the car’s conservative styling has staying power. It takes a long time for a Corolla to look old, even when it is. Toyota changes the exterior and interior appearance of the Corolla only gradually with each successive generation – along evolutionary lines. This may be one of the factors behind the car’s impressive retention of its value. Three or four year old Corollas routinely sell for 70-80 percent of their MSRP, brand new.

Another plus: Though the Corolla is classified as a “compact,” it is much roomier than you might expect.

It has a pretty amazing 41.7 inches of front seat legroom – which for comparison exactly matches the front seat legroom in the mid-size 2010 Buick LaCrosse I recently test drove. And how about this: The Corolla has more rear seat legroom (36.3 inches) than a Lexus ES350 (35.9 inches)!

I have driven several other compact sedans that advertise five-pasenger capacity but really can’t carry more than two adults (up front) and maybe a couple of kids in the back.

The trunk is on the small side (12.3 cubic feet) but with so much room in the cabin, this car can take on a lot more than you might think.

Up front, there’s a dual door glovebox, tilt and telescoping wheel (unusual in an entry-level car, even today) and a handsome, functionally laid-out dash with everything you need and nothing you don’t.

There are several lower-priced, very similar cars out there – including the $13,645 Hyundai Accent Sedan, the $13,320 Ford Fiesta and the barely $10k Nissan Versa 1.6, among others. These cars can beat the Corolla on price (Versa) or fuel efficiency (Fiesta), spunkiness (Scion xD), driving zip (Mazda3) or even features-for-the-dollar (Kia Forte). But none of these Johhny-come-latelys has the history – and thus, the buyer confidence – enjoyed by the best-selling Corolla.

Also keep in mind that while some of the competition is lower-priced starting out , in many cases the price difference equalizes when you factor in the cost of almost-essential optional extras such as air conditioning and an MP3-playing stereo – both items standard in the $15,450 base model Corolla.

The only major accessories not included in the base car’s price are power windows and door locks, which do come standard in the slightly more expensive ($16,850) LE.

And we really won’t know for sure how good those other cars are until about ten years from now. Look around today and you’ll see a lot of older Corollas running around. Will that be true of the other makes with better warranties than today’s Toyota circa 2020?

Buyer’s note: Toyota will redesign this car for 2011, so there are probably some great deals to be had on the remaining inventory of 2010s.

You can buy something that costs less, has more stuff, looks wilder – or that’s more entertaining to drive.

But there’s still nothing out there quite as Blue Chip-solid as the Corolla. 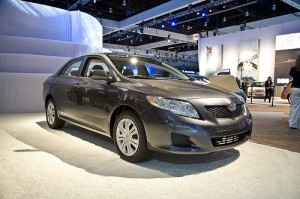