John DeLorean – the father of the Pontiac GTO – is credited with having invented the muscle car concept. Take an affordable/budget-oriented “normal” car, shoot it up with the automotive equivalent of a horse needle full of steroids and sell the thing at a price young buyers (and the young at heart) could still afford.

John Z’s ghost must be working ast Mazda these days – because the Speed3 is the most faithful modern-day incarnation of a 1964 GTO 389 Tri Power you’ll find.

The MazdaSpeed3 is a hopped-up, high-performance version of Mazda’s entry-level, compact-sized hatchback sedan. It features a 263 hp turbocharged and intercooled, direct injection engine and six-speed manual transmission. Starting MSRP is $23,340.

The 2010 Speed3’s bodywork and interior are all new; the underlying suspension and chassis have also been tweaked to be more compliant over potholes and rough roads without compromising all-out handling tenacity.

The 263 hp turbo engine is mostly the same as last year’s though.

A lot of bang for the buck.

263 hp through the front wheels!

Racy (but not kiddie) interior and exterior styling; a sharp looker.

No coupe or sedan bodystyle available.

Clutch take-up can be a bit abrupt until you get used to it.

No longer as dominating a presence in its class as it used to be.

Part of what makes the MazdaSpeed3 a modern-day muscle car is its lowball price; the other part of it is its more-than-you-expected powerplant – a turbocharged, intercooled 2.3 liter four cylinder that produces almost exactly as much power as the significantly more expensive Subaru WRX’s 2.5 liter engine (265 hp) and substantially more power than the nice but pushing $28k Lancer Ralliart (just 237 hp from its turbo 2.0 liter engine) or the $24k VW GTI sedan (200 hp).

The Speed3’s engine is teamed up with a six-speed manual transmission only.

An automatic is not offered.

Neither is all-wheel-drive (both the Subaru WRX and the Lancer Ralliart come standard with AWD and are available with automatics; the GTI is FWD and does offer an available – but really expensive – automatic).

Published fuel efficiency numbers are the same as before: 18 city, 25 highway.

Piloting the Speed3 is a parking brake 180 counterpoint to its chief rivals, the Subaru WRX and Lancer Ralliart. Both cars are quick, fast and superb-handling street machines. The difference is that driving the Mazda is a much more involved experience, just as it was back in the day when you were behind the wheel of a V-8 brawler from the Motor City.

Turn off the traction control, grasp the six-speed’s shifter. Blip the throttle – and dump the clutch. It’s all on you, now. Hang on – and wrestle with the wheel as the front end tries to cope with the power you’re putting down.

It is an experience totally unlike what you’d encounter behind the wheel of AWD performance cars like the WRX and Lancer Ralliart. About the same power on tap (in the Soobie, anyhow) but it’s modulated through the AWD system instead of pouring entirely through the front wheels like an F-18 going vertical with both afterburners lit.

Putting 263 hp through the front wheels is the kind of thing that would have made John Z. smile.

Mazda does fit the little beast with an electronic torque limiter that dials back some of the Berserker fury, but the experience is still much more raw – and arguably just more fun – than running the more civilized Soobie or the AWD Ralliart all-out.

You take satisfaction in manfully handling the torque steer that sometimes crops up (especially at the moment of a hard 1-2 upshift) … in keeping it all under control.

And with 60-plus more hp available than the GTI’s engine gins up, the Speed3 launches harder and pulls stronger, too.

Another high point: Despite pretty aggressive suspension tuning and a standard high-performance 18-inch wheel/tire package, the Speed3 is everyday friendly in terms of its ride quality while also being fully capable, at the drop of a hat, of breathing hard on a WRX – and mauling a less potent (but still stiffer riding) car like the Lancer Ralliart.

The GTI’s ride quality is probably the best of them all – but there’s that 63 hp deficit… .

The FWD Speed3 will suck in the snow, of course – an area where the AWD-equipped WRX and Lancer Ralliart have a clear advantage.

The WRX, meanwhile, is available as both a sedan and a hatch. The GTI comes as a sedan or coupe. And you can order an automatic with either car.

What you’re looking for will determine whether these facts are Speed3 positives – or negatives.

Utility-wise, it’s hard to argue with the Speed3’s hatchback wagon layout; you get a decent amount of interior space (43 cubic feet of total cargo capacity with the back seats down; 17 with them up) and with it, everyday usability. I was able to pick up a set of two fairly large bedroom end tables and carry them home in the Speed3; it also handled two large bales of animal bedding and a couple of big bags of cat food, too.

Styling-wise, of course, some people just don’t like the hatch/wagon look – in which case, the sedan-available Soobie (or the coupe and sedan available VW) have an ace up their sleeves.

The Lancer Sportback Ralliart is more wagon-like, but like the Speed3, it’s a take-it-or-leave-it bodystyle – with no other choices available.

It’s a similar deal with the Speed3’s take-it-or-leave it six-speed manual – and the FWD-only layout. Some (the hardcore gearhead types) will like the lack of an available automatic transmission. It adds to the car’s macho aura – and it also helps keep the price reasonable (automatics can add $1,000 or more to the price of a car).

On the other hand, AWD makes a car (especially a powerful car equipped with aggressive, high-performance tires) a bit more manageable in the rain and at least somewhat feasible in the snow – which matters to people who live in areas where it rains (or snows) a lot.

Same with the stickshift; tons of fun – when you can drive the thing. Not so much fun when you’re stuck bumping and grinding along in rush-hour traffic jams. The Speed3’s clutch is also a little bit stiff, with “take-up” that can be abrupt – at least until you get used to it.

Objectively, the Mazda is beautifully finished, to an extent that belies its almost-econo-car MSRP. The GTI is its equal here, but again, there’s that 63 hp deficit… .

The revised interior of the ’10 Speed3 features an in-dash GPS system (replacing the previous pop-up unit) and there’s now a turbo boost gauge in between the tach and speedo that registers to 15 psi.

However, it’s an LED bar graph unit; arguably an analog gauge would be better. Bar-graph readouts can be jumpy and probably aren’t as accurate. Also, you’re limited to the max readout of 15 psi; a gauge would leave room for the inevitable mods that turbo’d cars like the Speed3 usually receive.

The revised exterior styling – with Mazda’s new “big mouth” look – features a more subtle, molded-into-the-hood scoop that ducts outside air to the intercooler. It’s racy but not kiddie; the absence of a gigantic wing on the trunk and IMSA-replica bodykit make this car an adult-friendly ride.

Another nice touch for 2010 is the elimination of the previous multiple trim packages (Sport, Touring, etc.) The ’10 comes in just one well-equipped trim – Sport – which includes the 18 inch rims and summer/performance tires, leather interior trim, climate control, cruise and power everything, six-speaker stereo with Bluetooth wireless.

Mazdas (all of them) sweat quality from every pore. You can root around the entire thing in a vain search for an obvious cheap-out. Parts not immediately visible to the driver (and prospective buyer taking his first look) are as polished and carefully put together as the stuff that’s in line of sight. Climb in the back seats and notice how nothing seems lower-rent than it is up front. Open the hatch and observe the level of detail given the fitment of panels, cubbies, carpet and trim.

Then go back and look at that sticker price: Just over $23k … for all this.

For the $23k-ish Mazda asks for the muscle-bound little Speed3, it’s still nothing short of awesome. 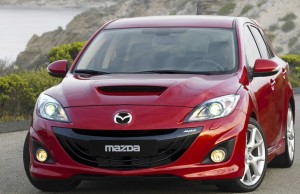