It’s getting really tough to figure out which new small car is the best small car – because almost all of them are pretty damn good.

There’s the new Ford Fiesta – which pulls a hybrid-like 41 MPGs on the highway and does it without looking or feeling like a Blue Light Special.

So many good choices.

So what about the Nissan Sentra?

Remember when it was one of the obvious standouts in the segment?

How’s it stack up today?

The Sentra is Nissan’s “econo-sport” sedan; it was among the first small, affordable cars to be designed to do more than just get good gas mileage and get from A to B reliably.

It starts at $15,520 for the base 2.0 model with six-speed manual transmission and can also be ordered in souped-up SE-R (and even more souped-up SE-R Spec V) versions – both equipped with a larger, more powerful 2.5 liter engine and other performance upgrades.

A Sentra SE-R with Continuously Variable (CVT) automatic starts at $19,580; the manual-only and more aggressively tuned SE-R Spec V has a base price of $20,080.

Competitors include the Mitsubishi Lancer/Sportback, Mazda3/MazdaSpeed3, VW Golf/GTI and other sport-minded sedans and hatchbacks in the same general price range.

ABS, traction control and stability control are now standard features on all trims, including base versions.

Conscious of buyer freakout over rising gas prices and their increasingly precarious economic position, Nissan has added a Fuel Economy (FE) feature to all Sentras with the 2.0 liter engine  that slightly ups the fuel economy by altering ignition timing and other engine parameters for best-possible economy.

S models get a new body kit similar to the SE-R’s as well as performance-minded 16-inch wheels and tires.

Bluetooth wireless and GPS navigation with real-time traffic and 5-inch LCD display are among the high-end options you can add.

Roomy front and back seats – in particular front seat headroom, which is as much as 2 inches greater than in several competitors.

As much as 200 hp available in SPEC V versions.

Nissan has really held the line on prices. The 2011 Sentra only costs about $100 more across the board than the 2010 version.

If you’re looking to max out on economy, a new Versa 1.6 sedan with AC costs about $5k less than a base model Sentra, gets better gas mileage, has about as much room inside – and a bigger trunk.

Current bodystyle/layout staring to get a little bit long in the tooth; it was introduced in 2006 for the ’07 model year and hasn’t changed much since then.

Just the one bodystyle. Some competitors offer both standard sedan and hatchback wagon layouts.

Not as swank as a Mazda3; not as high-rent looking (or feeling) as a GTI.

The Sentra’s standard engine is a 2.0 liter, 140 hp four-cylinder; a six-speed manual or (optionally) continuously variable (CVT) automatic are the transmission choices.

Though the Sentra’s standard engine is the same today as it was last year (and the year before that) it sill stacks up solidly against the $16,795 Mitsubishi Lancer ES and $15,800 Mazda3 iSV, both of which come standard with a 2.0 liter, 148 hp engine.

Both these cars (though newer designs) also come with five-speed manuals vs. the Nissan’s sportier six-speed transmission.

The Sentra with 2.0 engine takes about 8.4-8.6 seconds to hit 60 – borderline slow compared to the competition. It is pushing 2,900 lbs. empty, so this should not be surprising.

Gas mileage (with the six-speed stick) is a so-so 24 city, 31 highway. Models equipped with the optional CVT transmission do noticeably better: 27 city, 34 highway.

Buyers looking for performance – looks as well as goods – can choose the SE-R or the even higher-tuned SE-R SPEC V – both of which come with a larger 2.5 liter engine tuned to 177 and 200 hp, respectively.

The $23,700 MazdaSpeed3 is also more expensive than the SE-R Spec V – but with 263 hp on tap, it easily justifies its higher price point.

All Sentras are front-wheel-drive.

In ordinary A to B driving the Sentra with the 2.0 engine is comfortable, quiet and smooth. The fact that is bigger (longer by several inches as well as wider) than several of its competitors makes it feel more substantial than the typical compact.

You only become aware of the car’s weight – or more accurately, that more power could be handy – during pedal-to-the-floor passing attempts. It gits ‘er done, but 140 hp and more than 3,000 lbs. (car with driver on board) is less than optimal.

Acceleration is better with the six-speed manual, but you’ll get more gas mileage with the CVT.

Either way, another 20 hp would be a major improvement.

Some reviewers say the CVT is thrashy, but that was not my experience. During max-effort full throttle acceleration runs, it will (like all CVTs) run right up to 6,000 RPMs or so and stay there until you back off the gas. But the sounds aren’t desperate or dangerous and at anything less than all-out, the CVT just faded into unobtrusively into the background. The absence of shift shock (because CVTs don’t up or downshift; they just swoosh you forward like a turbine) definitely makes full-throttle runs less herky-jerky, even if you aren’t getting down the road very quickly.

For more beans – and much better acceleration – you can order up the SE-R or the SE-R Spec V.

The Spec V’s 0-60 time is right there with a MazdaSpeed3 or GTI.

The only nit here is that the SE-R only comes with the CVT. Nothing wrong with it, but buyers of sporty/performance cars do tend to like manual transmissions.

Why does the base 2.0 Sentra come standard with a six-speed but you can’t even order one with the performance-minded SE-R?

Yes, you can get a six-speed manual – but you have to step up another notch to the SE-R Spec V, which costs about $500 more than the regular SE-R. It’s not a huge deal; after all, you also get a 23 hp upgrade.

Handling isn’t quite as sharp as the MazdaSpeed3, but it’s competitive with the GTI’s.

The VW, like the Sentra, is a fairly heavy and tall-roofed car – which probably explains the similar handling dynamics – although the VW’s steering feel is more spot-on than the Sentra’s less tactile electrically assisted power steering.

The Sentra’s shape and general appearance is very similar to the current Altima’s – and Maxima’s – just on a smaller scale. Its fairly large/tall shape give it a not-econobox look that’s one of the car’s major draws.

The inside is handsome and roomy – especially for taller drivers, who will appreciate the 40.6 inches of front seat headroom (compare to 38.9 for the Mazda3 and around 39 inches for other competitors like the Mitsubishi Lancer Sportback and GTI).

One potential detraction is the Sentra’s sedan-only layout, given that there are now several other cars in this class/price range that are offered in multiple bodystyles, including two-door coupes and five-door wagon forms.

The only thing I did not like about the Sentra’s interior is the hidden 12V power point. It is tucked away where you can’t see it in the lower part of the center stack. You literally have to find it by feel. If you use plug-in accessories such as a radar detector, this can be annoying.

Some drivers may also wish the optional GPS system had a larger display. The in-dash LCD screen is maybe six inches wide by about five inches tall. But the map/info display is easy to read and the controls are not aggravating.

One thing I really like about the Sentra – about all current Nissans – is there’s no annoying “Belt Minder” buzzer.

Just a dash light that stays on if you fail to wear your seatbelt.

Nissan is the last automaker to resist the PC onslaught – and for this, I love ’em so.

It’s no longer the strongest or the quickest – and its gas mileage isn’t the greatest – but overall the Sentra’s still an appealing car. It’s probably more reliable than a Mitsubishi Lancer; SE-R and Spec V versions are still very credible performers and cost thousands less than newer kids on the block like the  MazdaSpeed3 or VW GTI. And there’s more noggin room for gawky six-footers like me.

Another point: Nissan will be doing a major update of the Sentra within a year, so my bet is you’ll find dealers eager to clear out their inventories of the current model. Play it right and you could drive home a new Spec V for $18k or so and have a couple thousand bucks left in your budget for aftermarket upgrades – or insurance/gas. 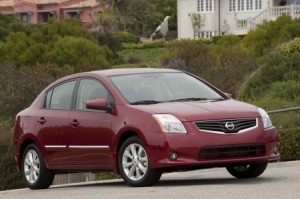