An old truck trundling down a gravel road with the owner’s Lab happily airing its jowls out back in the bed … it’s a scene as American as a Norman Rockwell Boy Scout painting.

And it may soon be illegal.

There are busybodies hectoring state and local governments to pass laws making it unlawful for dogs to ride in the back of a pick-up truck “unsecured” – and even going so far as mandating that they be “strapped in” (God knows how) when they’re sitting inside the vehicle. (See here http://www.barkbuckleup.com/ and here http://abcnews.go.com/US/story?id=3135890 .)

America’s truly becoming a loonie asylum – with the inmates running the place and the “crazies” being the dwindling few who regard all this stuff as completely absurd.

Yes, it’s true a dog riding in the back of a pick-up could leap out to chase something he sees like a squirrel or maybe another dog – possibly hurting himself in the process as well as creating a potential road hazard. And a dog riding shotgun (and unbuckled) next to his owner could slam into the dash in the event of a collision – and might be injured as a result.

These are the main arguments trotted out in favor of mandatory canine confinement and four-pawed buckle-up laws.

As always, these arguments assume every dog owner is an irresponsible idiot – as opposed to the usual few.

There is, for example, a big difference between trundling down a lightly traveled country road at 20 mph with Old Blue in the bed out back – and doing the same on a crowded highway at 70 mph. Most dog owners understand the difference and don’t do the latter – even without a law telling them not to.

And not all dogs are idiots, either.

This works both ways, too. An owner who knows his dog can’t be trusted typically won’t put him out in the bed – no law required. Because – drum roll, please – most owners don’t want to see their dogs get hurt. No law is necessary here, either.

There are also practical considerations:

How, exactly, are dogs supposed to be “secured”? Will a leash wrapped around a tie-down suffice? Does it matter at all that this is apt to get the dog tangled up and maybe choked to death? If he’s in the vehicle, will we be required to buckle him up as if he were human? Or are we all going to be required to cart around enormous, unwieldy dog carriers every time we take our dog for a ride – even if it’s just down the road?

Anyone who owns a dog knows they tend to move around a lot; they can’t be expected to sit still – and their bodies aren’t designed to work well with shoulder and lap belts designed to fit us, even if they could be persuaded to sit still. Try and wrap a squirming 100 lb. Labrador Retriever in a three-point belt sometime, just for fun. You’ll discover he’ll flail around even more frantically than he would if he were just allowed to hang out, as dogs like to do – free to stick his head out the window to enjoy the breeze.

Whatever happened to common sense? To letting individual dog owners decide whether (or not) their dogs are ok out back? Some dogs would never jump out of a moving vehicle; some might – and some do. But the only person who really knows is that dog’s owner. Some cop who sees you drive by with your dog but doesn’t know either of you certainly doesn’t. Why give him the power to hassle you merely because he thinks your dog might jump out of the bed?

Why not let a dog’s human family – instead of cops and other government busybodies – make the call?

Instead, we’ve got a renewed cry from that relentless Greek Chorus of nags – the very same crowd that began with a campaign merely (so they said at the time) to “encourage” seat belt use by humans that in short order morphed into “primary enforcement” laws empowering police to pull people over and plaster them with hefty fines for failing to buckle up – that’s now pushing hard for a new batch of laws that would make it a ticketable offense not to “secure” our dogs when we take them for a ride.

Bottom line: You can’t legislate stupidity out of existence. But you can make it more common by constantly forcing everyone down to the level of the least common denominator. 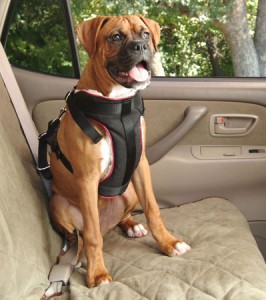