Here’s something uncommon: a manual six-speed transmission as an available feature in a medium-sized crossover SUV.

The Hyundai Sante Fe is almost unique in this respect.

But it’s not the only area where the new Sante Fe offers something different – or simply more appealing.

The Sante Fe is a medium-sized, five-passenger crossover SUV available with front-wheel-drive or all-wheel-drive – and four or six-cylinder engines. It’s about the size of a Chevy Equinox but costs less across the board.

The Sante Fe gets two new engines as well as significant exterior and interior updates.

Gas mileage with the V-6 engine is almost exactly the same as it is with the four.

More room for cargo than Equinox.

Love the pull-out (vs. pull-up) handle for the rear liftgate.

Manual transmission only available in base GLS with front-wheel-drive and four-cylinder engine.

All AWD (and V-6) versions require the automatic transmission.

The Sante is available with either a four-cylinder engine or a V-6.

The standard 2.4 liter engine produces 175 hp – making it among the strongest base/four-cylinder engines available in a mid-sized crossover SUV (the Chevy Equinox’s 2.4 liter, 182 hp engine is number one on power – but just barely).

It is offered with your choice of either a six-speed manual transmission (a very rare feature among vehicles of this type) or a six-speed automatic. You can select front-wheel-drive or all-wheel-drive; however, choosing AWD requires the automatic transmission – and bumps the Sante Fe’s price to $24,695.

Acceleration and fuel efficiency are both very good with the base 2.4 liter engine. The four-cylinder Sante Fe can reach 60 mph in about 8.2 seconds, which as Hyundai likes to point out is actually quicker than last year’s 2.7 liter V-6 powered Sante Fe. Fuel economy – 21 city/27 highway for the AWD version is also better than last year’s 2.7 liter V-6 equipped Sante Fe (17 city/24 highway).

The 3.5 liter engine comes standard with the new six-speed automatic and your pick of FWD or (optionally) AWD.

Maximum towing capacity is 3,500 lbs. – par for the segment.

The new 2.4 liter engine is a big improvement over the previous 2.7 liter V-6. It’s got enough power/delivers quick enough acceleration that you don’t really need to upgrade to the optional V-6 (essential in the previous Sante Fe). The more advantageous gearing of the new six-speed transmissions (manual or automatic) also means there’s less RPM drop between each gear change, and this makes the Sante Fe feel quicker (and sound better) when accelerating rapidly.

The available six-speed manual transmission may not be high on most people’s list of Must Haves, but it does add a degree of sportiness that’s simply not offered in other medium-sized crossover SUVs – the vast majority of which are automatic-only (including the Honda CR-V and Toyota RAV4). In fact, you have to go down a size – and to something more wagon-ish, like the Subaru Forester – to find a clutch at all.

The Sante Fe’s optional V-6, meanwhile, is as powerful as the engines found in larger – and much more expensive – premium crossover SUVs like the Lexus RX350 (3.5 liters, 275 hp) and more powerful than the optional V-6s in direct competitors such as the Chevy Equinox (3.0 liters, 264 hp).

The six-speed automatic (standard with the V-6) shifts aggressively but not harshly; gear changes happen quickly but the transitions involve minimal driveline shock. It feels almost CVT-like when you’re driving hard, but without the noise and harshness. You can control up and downshifts manually if you like but as with most modern automatics, it’s not necessary. The transmission shifts better than you can on its own – though it can be fun to play with the “+” and “-” shift controls sometimes, too.

The Sante Fe’s ride quality and its overall driving feel are both comparable to anything else in the segment, with the biggest difference being the SF costs less.

The SF’s exterior styling is fairly generic but nothing about it is disproportionate or ugly. It’s less rugged and macho-flavored than the hunky Chevy Equinox but functionally it does as much or more than the Chevy in most respects.

For example, it has more total cargo capacity (78 cubic feet vs. 64 for the Equinox) and noticeably more front seat legroom (42.6 inches vs. 41.2 inches).

However, rear seat legroom is significantly less in the SF than the Equinox – 36.8 inches vs. 39.9 inches. This is where Hyundai designers compromised – opting for more total cargo space at the price of cutting down on rear-seat accommodations somewhat. It’s cozy in the second row – my knees just barely touched the front seatbacks – but not cramped. I’m well over six feet tall, so most people’s knees won’t touch the front seatbacks.

Nice features include air ducts built into the B pillars for the second-row passengers, which is better in my opinion than the more common ducts built into the back of the center console, which is mounted lower and thus sends a lot of the air to the floor area rather than more directly toward the people sitting back there.

In the cargo area, there’s a large hidden storage compartment under the floor that’s handy for securing valuables out of sight. There’s also a 12V power point back there, which is nice to have for tailgating.

Speaking of the tailgate – one of the SF’s standout features is the pull-out handle to open it up.This design is very ergonomic; the hand placement (and lifting action) is much more natural – plus you don’t have to fish around for a hidden/hard-to-see pull-up handle, as on may other crossover SUVs. It’s probably sturdier, too.

The layout of the interior – especially the dash area is modern and attractive. The center stack is canted slightly toward the driver, which is sporty and functional. Cool deep blue backlighting for the gauges and controls gives the cabin a high tech glow at night. The blue is also easy on your eyes.

Unlike early Hyundais – which were usually decent cars but with some obvious cheap-outs here and there – current Hyundais boast fit and finish, paint quality and overall attention to detail that’s mostly as good as anything else in their price range – and sometimes even better. The SF’s dash area, for example, has really rich-looking wood trim inserts (not the gauche-looking, obviously fake, overly-lacquered and shiny crap you find in some others – you know, the stuff that looks like a shellacked Elvis photo on an old piece of driftwood) and the dashpad is made of soft plastic as nice as you’ll find in anything the SF competes with.

I searched the whole car over and the only small thing I found was a slightly rough body seam/join behind the liftgate. Nothing horrendous or functionally problematic. Just a slight echo of Hyundais-Gone-By.

What really matters, quality wise, is the superlative record Hyundai has earned in recent years – as measured by customer satisfactions surveys and the incidence or problems major and minor. People love their Hyundais – and if you research it a bit you’ll find they have good reason to. Recent vintage Hyundais have a much better than average record for reliability and a low incidence of significant problems cropping up.

The new Sante Fe is much improved and desirable in its own right – no longer just a budget-friendly (but compromised) alternative. 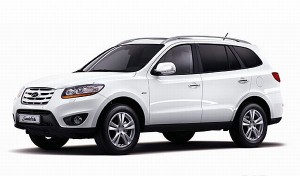