There are a dozen or more compact-sized SUVs on the market, but only a few have real (truck-type) four-wheel-drive – 4WD with Low range gearing.

Suzuki’s Grand Vitara is one of these – and it’s got more going for it than just its off-road bona fides.

The Grand Vitara is compact SUV (a real SUV) with four doors and room for 4-5 people. It’s available in rear-wheel-drive or 4WD versions, with either a four-cylinder or V-6 engine.

Prices begin at $19,099 for a base rear-drive, four-cylinder, manual-equipped model and run up to $27,199 for a top-of-the-line Limited with V-6 engine, 4WD and automatic transmission.

An interesting and unusual new feature is a removable/portable Garmin GPS navigation system, now standard on all trims – including base models. This could be the beginning of a new trend away from expensive and can’t-take-them-with you factory in-dash GPS units.

A real-deal 4WD SUV that can handle itself off-road.

Price is a bargain compared to similar vehicles such as the Jeep Liberty.

4WD is available with four-cylinder engine (it’s common in other models to make the buyer upgrade to the optional V-6 to get 4WD).

Nicely fitted out and finished; does not look low-rent.

Optional V-6 is automatic only.

Standard GPS has a fairly small screen (and controls).

The Grand Vitara comes standard with a 2.4 liter, 166 hp four cylinder and your choice of five-speed manual or (optionally) four-speed automatic.

A part-time 4WD system with Low range gearing is available with either transmission.

Acceleration with the 2.4 liter engine is a little slow-pokey (about 10 seconds to 60 mph) but it’s in the same ballpark as car-based, light-duty FWD/AWD compact SUVs like the Honda CR-V, which haven’t got the off-road capability the rugged little Suzuki does.

Optional is a 3.2 liter, 230 hp V-6 that’s teamed with a mandatory five-speed automatic.

You can go rear-drive or 4WD with this combo, too.

The GV’s V-6 is significantly stronger than the Jeep Liberty’s standard 3.7 liter, 210 hp V-6 and because the Suzuki also weighs considerably less (3,468 lbs. vs. 3,985 lbs.) acceleration/response is snappier in the Grand Vitara.

Though the Grand Vitara is a “real” SUV – with the chassis and the heavy-duty gear necessary to safely handle the rigors of off-road use – its on-road manners are noticeably better than competitors like the Jeep Liberty.

The GV’s V-6 has more power, an extra gear in the transmission (the Liberty’s top-of-the-line automatic is a four-speed vs. the Suzuki’s much more up-to-date five speed) and the GV weighs an incredible 500-plus pounds less than the Jeep. It thus feels more athletic when you hit the gas – and less ponderous when you enter a turn.

It’s also nice that you can get a four cylinder engine – and a manual transmission – and four-wheel-drive with that combo, too.

There’s decent fuel economy potential with the 2.4 liter engine (26 mpg on the highway is not at all bad for a vehicle that can go off-roading, which none of the four cylinder-equipped light-duty SUV competition like the Toyota RAV4 and Honda CR-V are built to handle) and the option of being able to shift for yourself adds a degree of sportiness, too.

In the Jeep, you have to buy the gas-hog V-6 engine – and there’s no manual transmission option.

The Liberty is a competent vehicle; but it’s less fun to drive and doesn’t seem nearly as happy on-road as it is capable off-road.

My opinion: The GV is a much better-balanced vehicle, overall.

Another area where the Suzuki stays faithful to the real-deal SUV ethic is its side-hinged tailgate – and the full-size spare mounted right there on the door. I like both. The side-opening tailgate has a meaty, manly pull-handle and the door opens wide to give you full access to the cargo area More importantly, it can be closed easily and much more naturally, just by swinging the thing shut.

Other SUVs and crossovers have minivan-like lift-up tailgates that can be awkward to close if you’re not more than six feet tall and have long arms and strong muscles.

I really liked the accessibility of the spare tire – and that it’s a real tire, not one of those next-to-useless minis.

You almost never see this layout – or a full-size spare tire – anymore. Most light-duty SUVs and crossovers have a mini-spare that’s barely serviceable for even short-term use at low-speeds on paved roads only buried in the cargo area floor someplace – where it’s not only hard to get at but what do you do with your full-size flat after you mount the mini-spare? The hole in the cargo floor is usually just big enough to accommodate the mini-spare (to save space). But that forces you to haul your muddy/dirty old tire/rim in the cargo area, where it’s likely to ruin the carpet and make a godawful mess.

In the GV, you just mount the flat tire/rim on the tailgate and motor on. And since it’s a real spare tire and not a “temporary use only” mini-spare, you can motor on, too – on-road or off.

If you’re out in the woods, camping or far from paced roads, that could be a very important lifeline.

Space/cargo wise, the GV actually has more room than the physically larger Jeep Liberty: 71 cubic feet vs. 64 cubic feet. That’s impressive use of space given the Suzuki is about an inch shorter overall (175.8 inches vs. 176.9 inches) and rides on a wheelbase that’s nearly three inches less than the Liberty’s (103.9 inches vs. 106.1 inches).

The Suzuki also has more front seat legroom (41.3 inches vs. 40.8 inches) and virtually identical front-seat headroom (40 inches 40.4 inches). The Jeep does have more second-row head and legroom (40.3 inches and 38.8 inches vs. 38.2 and 37.2), which explains why the Liberty has a bit less total cargo-carrying capacity.

Still, there’s enough room for a pretty big person (me – six feet three and 210 pounds) to sit comfortably in the rear seats without either legs or head knocking up against anything.

The optional part-time 4WD system has both 4WD High range Lock (which keeps the power split, front-to-rear, at a constant 50-50) as well as 4WD Low range for slogging through deep mud/snow and so forth.

The standard portable/removable GPS system is a neat feature; not only can you take it with you (as when camping or hiking or just walking around) but you can also transfer it to another vehicle. The unit comes with its own leather carrying case and it’s small enough to easily fit in the pocket of your cargo pants or in a purse.

Probably the weakest functional aspect of the Suzuki, though, is its not-so-great 3,000 lb. max towing capacity. There are mid-sized cars that can pull 3,500 lbs.and the Jeep’s 3,500 lb. rating easily outclasses the GV in this one very important area.

Suzuki is a highly respected name in the world of motorcycles but its four-wheeled offerings are less well-known. That doesn’t mean they’re iffy – Suzuki’s just not a brand many people think of reflexively, like Honda or Toyota (or even Jeep) when it comes to cars. But the upside to that is a very aggressive pricing structure. The GV’s base MSRP of $19,099 is $4,100 and change less than the Jeep Liberty’s base price of $23,255. That’s a huge difference – enough to keep you in free gas for two or three years.

Keep in mind you get standard GPS for that $19k, too.

The GV also comes with an exceptionally long-legged seven year/100,000 mile powertrain warranty – vs. five years/100,000 miles for the Jeep.

Both have the same three year/36,000 mile basic warranty.

Overall, the Suzuki is much more nicely finished and just comes off as the higher quality vehicle – especially interior-wise. The GV’s cabin has nicer-looking, softer-feeling materials than the plasticky and ticky-tacky Jeep.

For example, the inside door jambs and other parts of the GV that aren’t immediately visible are still clear-coated, just like the rest of the vehicle’s exterior panels. In some competitor models, you’ll find that such areas aren’t clear-coated (to save money during manufacturing) and while it’s not a functional issue, it still looks low-rent. The GV’s optional perforated leather (including door panels) is exceptionally nice for the price. 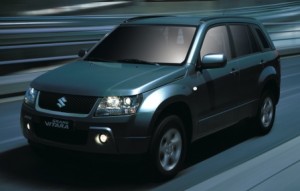 Ben Affleck is Ok With TSA Grabbing Your Dick